On Sunday, the NYTimes ran an insightful and well written op-ed by Seamus McGraw on his regrets of leasing his Pennsylvania land to a natural gas company. McGraw, who is the author of ‘The End of Country”, summed up his thoughts here:

Standing there in what used to be our pasture on that light summer night, watching as the machinery of progress blasted the rock a mile beneath my feet, I realized that was what scared me the most. Not that this was inevitable, but that its impact depended so much on me, on whether I had the character to come out from behind the convenient shield of “are you for it or against it” ideology and find the strength, the will and the means to do what I can to make sure this is done in the best way possible.

As readers may know, the benefits from the Marcellus Shale gas drilling might be a mixed bag unless the state takes a long-term view. One of the last things the state should be doing is worrying about over taxing the industry, which has little effect on production and employment.

On an unrelated subject, Jared Bernstein with the CBPP has an op-ed in today’s NYTimes dispelling the myth that small businesses are the engine of employment and economic growth that politicians often pontificate about. Berstein concludes:

The next time a politician tells you how he or she is for small business (which will likely be the next time you hear a politician say anything), be mindful that to the extent that size matters at all for job growth, it’s really about new companies that will start small and, if they survive, perhaps grow large. Everything else is largely noise — and too often, noise that has little to do with what this economy really needs.

Speaking of the CBPP, they just released a new report highlighting that only 22 states produce a “current services baseline” budget that “gives an honest assessment of the state’s overall fiscal health by enabling policymakers to see if the state will likely have enough resources to maintain services at current levels — or possibly expand them.” As you can tell from the map below, West Virginia does not produce a current services baseline budget that meets this criterion. While West Virginia does produce a 6-year financial plan (see pages 10-19), it starts from the governor’s recommendations rather than the current year’s enacted budget.  Therefore,  it doesn’t really reflect the cost of continuing current services, so much as the long-term cost of enacting the governor’s recommendations. 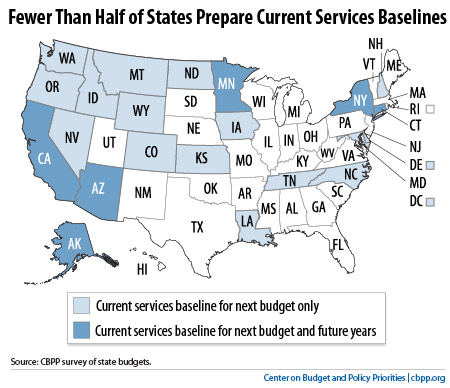