Blog Posts > Medicaid Buy-in Could Be an Option for West Virginia
June 5, 2019
WVCBP

Medicaid Buy-in Could Be an Option for West Virginia

Though the passage of the Affordable Care Act (ACA) in 2010 dramatically reduced the number of uninsured people in the United States in the immediate years following implementation, many states (including West Virginia) have been experiencing a turnaround. West Virginia especially experienced a historic decrease in the number of uninsured citizens. Now, nine years after passage of the ACA, West Virginia has seen its uninsured rate creeping back up, from a low of 5.3 percent to a current rate of 6.1 percent.

In light of declining insured rates, at least ten states are exploring a Medicaid Buy-in program—where residents are able to purchase Medicaid health insurance through premiums either on or off the ACA Marketplace—and five states (Colorado, Delaware, Massachusetts, New Mexico, and Oregon) have published studies about what a Medicaid buy-in would look like. One state, Nevada, even passed a Medicaid buy-in program in 2017 but was vetoed by the governor citing the need for further study. Extending public health insurance programs through a buy-in is popular with Republicans and Democrats alike. But even with that popularity, there are a number of considerations that have to be part of the conversation.

What is a Medicaid Buy-In?

There is no one answer to what a Medicaid buy-in would look like but a feature to all is that consumers would pay for premiums and other cost sharing measures such as co-pays and deductibles that are affordable given their income. Currently, 25 states already have some sort of cost-sharing imposed on Medicaid recipients (including West Virginia). Some of these are based on income and some are standard for all recipients. Most cost the insured very little for routine care or prescription drugs. 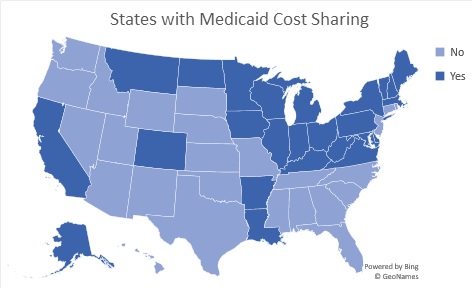 Offering a Medicaid buy-in for those who do not qualify for traditional Medicaid is an attempt to leverage things such as Medicaid’s provider network and infrastructure to offer a more affordable option for health coverage.

One option for doing that is by placing a state-sponsored Medicaid buy-in plan on the ACA marketplace. This option may or may not need a 1332 Medicaid waiver[1]. If a state’s plan meets the requirements to be a Qualified Health Plan (QHP) it is likely that no waiver is necessary. However, if the state wants to receive tax credits directly a waiver would probably be needed. Housed within the ACA Marketplace, these plans would establish premiums based on ACA rules and eligibility and are the same as Marketplace eligibility.

Another option is for states to offer a Medicaid buy-in off of the ACA Marketplace. This option allows states to set rates, premiums, and cost-sharing for coverage that could be similar to Medicaid or Marketplace insurance but would not be subject to private insurance ratings. This option would lower the number of people receiving tax credit subsidies on the Marketplace which could be used to offset the cost of the buy-in program. A 1332 waiver would be required to allow individuals to use Advanced Premium Tax Credits because this purchase would not be regulated as a Qualified Health Plan like those on the Marketplace are.

What is Happening in Washington?

Recently, Gov. Inslee (D) of Washington, signed the first public option health insurance bill into law. Though not referred to as a Medicaid buy-in, Washington’s public option plan will be made available for residents who do not qualify for Medicaid but do qualify for ACA Marketplace insurance and are at or below 500% of the federal poverty level (for a single person, this includes those earning $62,450 or below, for a family of four that number is $137,750 or below/year). Though costs are currently indeterminate, the goal is to provide an affordable option on the Healthcare Exchange that would cost no more than 10% of an individuals modified gross income for healthcare insurance premiums. The Washington State Health Care Authority (HCA)—which currently runs the Medicaid and Employee and Retirees Benefits plans—will begin contracting with health insurance providers to provide these affordable, alternative marketplace options. Full implementation of the law will not happen until 2025, though steps towards implementation are to start this year.

A recent look at West Virginia data shows that West Virginia is struggling to maintain insurance coverage. For a variety of reasons—including paperwork barriers, confusion, the elimination of cost-sharing reductions (payments to insurance companies to lower the cost for people making up to 250% of the Federal Poverty Level), the repeal of the individual mandate, and less resources for in-person enrollment assistance—health insurance coverage is declining in West Virginia. When health insurance coverage declines, costs go up. Uninsured people receive less preventative care and have worse health outcomes—creating a fiscal burden for families and for the healthcare system. Providing an affordable option for people in the form of a Medicaid buy-in can help mitigate this decline and make insurance coverage more affordable for families earning too much to qualify for traditional Medicaid but who struggle to pay the ever-increasing premiums and other forms of medical cost-sharing.

The Kaiser Family Foundation reported that the most commonly cited reason for being uninsured is the prohibitive cost. In West Virginia, 6 percent of the population (or 101,400) was uninsured in 2017. According to the 2017 American Community Survey, the average age of the uninsured in West Virginia was 36 and with average annual earnings of $69,805. This puts the majority of uninsured individuals making too much money to qualify for Medicaid or Marketplace subsidies yet earning below 500 percent of the Federal Poverty Line (a common cutoff for the public buy-in options). Even earning 500 percent of the FPL, the cost of Marketplace insurance can be too much for families to afford. In 2019 the average Marketplace premium in West Virginia for a single person ranged from $512 for a bronze plan to $756 for a gold plan. This amounts to $6,144-$9,072 annually (or between about 9-13 percent of income) for the average individual in West Virginia. This does not include the cost of co-pays, coinsurance, deductibles, or any other cost sharing measures. Combined, these costs can price people out of the health insurance market.

In addition to the around 100,000 uninsured who could potentially choose a more affordable public option buy-in, we can estimate the number of individuals who would leave their Marketplace plan for the public option. Colorado posits that 7.7% of current Marketplace enrollees would opt for a public buy-in option. For West Virginia, this would be a small number, approximately 1,700 additional individuals as of 2019. A Medicaid buy-in option could help close to 100,000 West Virginians obtain affordable, comprehensive health insurance. West Virginia should commission its own study to see if this is a viable option to address declining enrollment and increased costs in health insurance coverage for the people of the state.

[1] The ACA allows states to apply for a State Innovation Waiver through section 1332. These are intended to give states flexibility in providing alternative, affordable health insurance plans besides those offered from private insurers. These plans must meet four criteria: be at least as comprehensive as coverage without the waiver, provide coverage and cost-sharing that is at least as affordable as coverage without a waiver, provide coverage to a number of residents that would be covered without a waiver, and not increase the federal deficit.