The Rock and the Hard Place on the Deficit

DEALING with our nation’s gaping budget deficit is going to hurt. So here is a question for policy makers: What would hurt more, raising taxes or reducing spending? 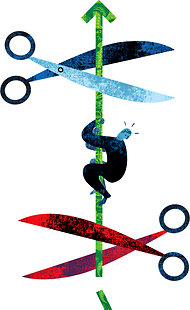 The Republicans who walked out of budget negotiations the other week think they know the answer. They insist that higher taxes would threaten our fragile economic recovery and do serious long-term damage. Better to cut federal spending, they say.

President Obama pressured Republicans last week to accept higher taxes, in addition to reduced spending, as part of a plan to pare the deficit.

Tax increases and spending cuts hurt the economy in the short run by reducing demand. Increase taxes, and Americans would have less money to spend. Reduce spending, and less government money would be pumped into the economy.

Professional forecasters estimate that a tax increase equivalent to 1 percent of the nation’s economic output usually reduces gross domestic product by about 1 percent after 18 months. A spending cut of that size, by contrast, reduces G.D.P. by about 1.5 percent — substantially more.

Some in Washington and in the news media have seized on a study I conducted with David Romer, my husband and colleague, that they say shows tax increases having a bigger short-term effect on the economy than spending cuts.

Our study, which examined only federal tax policy, found that conventional analysis underestimates the effect of tax changes on the economy substantially. The key problem we address is that changes in taxes are often linked to what is happening in the economy.

A tax surcharge in 1968, for instance, raised taxes because output was rising rapidly and was expected to keep surging. That the economy’s growth rate was about average even after that step might be interpreted as evidence that the surcharge did little. But considering the motive for it, and the fact that the economy had been predicted to continue growing quickly when it was introduced, this tax increase appears to have had a substantial chilling effect on the economy.

If there were a similar study on government spending, it would likely show that spending cuts also have larger effects than conventionally believed. Like tax actions, spending changes are often correlated with other factors affecting economic activity. For example, large cuts in military spending, like those after World War II and the Korean War, were typically accompanied by the end of wartime taxes and production controls. Those probably lessened the economic impact of the spending cuts, leading many researchers to underestimate the reductions’ effects.

There is a basic reason why government spending changes probably have a larger short-term impact than tax changes. When a household’s tax bill rises by, say, $100, that household typically pays for part of that increase by reducing its savings. Its spending tends to fall by less than $100. But when the government cuts spending by $100, overall demand goes down by that full amount.

Wealthier households typically pay for more of a tax increase out of savings, and so they reduce their spending less than ordinary households. This implies that tax increases on wealthy households probably have less effect on the economy than those on the poor or the middle class.

But if federal policy makers do decide to reduce the deficit immediately, reducing spending alone would probably be the most damaging to the recovery. Raising taxes for the wealthy would be least likely to reduce overall demand and raise unemployment.

What about the long-term health of the economy? Here, too, the relative costs of tax increases and spending cuts are often misstated.

Higher tax rates reduce the rewards of work and investing. This can have supply-side effects that lower economic growth over decades.

But a large number of academic studies has found that these effects are relatively small. An excellent survey due to be published in the Journal of Economic Literature found that raising current tax rates by 10 percent would reduce reported income — the end result of work and entrepreneurial effort — by less than 2 percent. That is far less than what was hypothesized by prominent Reagan-era supply-siders like Arthur B. Laffer. He and others postulated that raising taxes 10 percent would ultimately reduce income by more than 10 percent, leading to a decline in tax revenue.

Certain spending cuts may also have small effects on long-run growth. Entitlement spending on Social Security and Medicare could probably be slowed without reducing the nation’s productive ability. But as the bipartisan National Commission on Fiscal Responsibility and Reform emphasized in a report in December, such changes can and should be made in a way that protects the most vulnerable Americans.

Government spending on things like basic scientific research, education and infrastructure, on the other hand, helps increase future productivity. This type of spending often produces high social returns, but the private sector is unlikely to step up if the government pulls back. Case studies
described in a recent survey found that less than half of the returns from research-and-development spending were captured by the private investor, so corporations shy away from such endeavors. Cutting federal funds for R.& D. would leave a void and could have significant long-run effects on growth.

These long-term considerations, like the short-run concerns, point to a plan for reducing the deficit that combines spending cuts and tax increases. The cuts should spare valuable investment spending. On the tax side, nearly every economist I know agrees that the best way to raise revenue would be limit tax breaks for households and corporations.

The fiscal commission proposed a concrete plan that would trim a wide range of credits and exemptions, including the preferential treatment of employer-provided health insurance. It would use part of the revenue to reduce tax rates and the rest to cut the deficit. This would help deal with the deficit while actually improving incentives.

The bottom line is that tax increases should be part of any comprehensive budget plan. Opinion polls suggest that many Americans understand this. It is time for policy makers to accept this economic reality.

Christina D. Romer is an economics professor at the University of California, Berkeley, and was the chairwoman of President Obama’s Council of Economic Advisers.