Increasing affordability for prescription drugs has been a top concern for voters across the political spectrum, with skyrocketing insulin costs at the forefront of conversations. Nationally, the list prices of insulin tripled between 2002 and 2013. The average annual spending on insulin per type 1 diabetic doubled between 2012 and 2016. 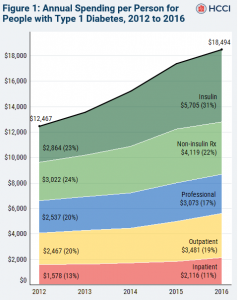 With these cost barriers, it’s no surprise that as many as one in four Americans with type 1 diabetes say that they’ve rationed their insulin in the past year. Here in West Virginia, the issue has been gaining significant attention, with several state lawmakers and constituents embarking on an “insulin caravan” to Canada this month to purchase lower-cost insulin, with a goal of raising awareness and interest in passing legislation in 2020 to address insulin costs.

Approximately 255,000 West Virginians, or 15.3 percent of the adult population, have diabetes. Additionally, 39.5 percent have prediabetes or higher than normal blood glucose levels. It is estimated that diabetes and prediabetes cost an estimated $2.5 billion in West Virginia each year, including the costs of serious complications like heart disease, stroke, kidney disease, and amputations.

In 2018, the American Diabetes Association released a framework of recommendations to address the burdens that rapidly increasing insulin costs have on consumers. They suggested increasing pricing transparency throughout the insulin supply chain, lowering or altogether removing patient cost-sharing for insulin, making it easier to produce more affordable insulin through a streamlined biosimilar process, and expanding access to health care coverage.

Multiple states have chosen to focus on reducing patient cost-sharing. Earlier this year, Colorado became the first state in the nation to cap the maximum insulin copay for residents with private health insurance. Just last month, the Illinois legislature passed a similar insulin copay cap, and the bill is expected to be signed into law by the governor. Both bills cap the maximum copay for a 30-day supply of insulin at $100 regardless of the dosage. Lawmakers in West Virginia have expressed interest in proposing similar legislation.

This is a significant step in addressing affordability and medication compliance. Multiple studies have found that lowering copays for insulin results in higher medication adherence. When costs are lower, more people adhere to insulin therapy and fewer people stop taking insulin.  A 2017 Yale study found that insulin cost concerns impact patients at nearly all income levels. Patients with incomes between $10,000 and $100,000 commonly cut or rationed their insulin because of cost concerns. Only the very wealthy (with incomes over $100,000) and the very poor (with incomes of less than $10,000) were less likely to do so.

In Colorado, early evidence shows that the insulin caps have not driven an increase in overall insurance premiums. The Colorado Sun reviewed health insurers’ 2020 rate filings and found that most didn’t mention the insulin caps as being a factor in health plan pricing. Those who did noted that the costs were “negligible.”

Though insulin copay caps are a positive measure that would result in financial and health benefits for many West Virginians, the savings will not impact all residents with diabetes. Insulin copay caps fail to help address cost and accessibility for people who are uninsured. There are questions about whether state insulin copay caps can apply to plans that are subject to federal regulations, like self-funded employer plans that fall under ERISA, Medicare, or TRICARE. Insulin copay caps also fail to address rapidly increasing insulin list prices, which are driving overall health costs.

Sign the petition urging lawmakers to address the high cost of insulin and other prescription drugs.