With the national unemployment rate kissing 10% , it was disheartening to see Howard Swint join the job killing deficit hawks. In Saturday’s Gazette-Mail, Swint argues that the solution to our economic woes is a federal  “Balanced Budget Amendment”  that “provides that annual expenditures do not exceed revenue for any fiscal year.”  Swint worries that “special interests” are going to saddle our “children and grandchildren’s money literally before they have even earned it.”  Apparently, there’s even a small movement to enact a balanced budget amendment. The push to enact such an amendment reflects a deep misunderstanding of how the economy works in a recession and a hidden desire to cut benefits and entitlements like Social Security.

Let me first say that the #1 REASON why the U.S. has a long-term budget deficit problem is out of control health care spending (per person health care costs exceeding per person GDP growth). Secondly, our current deficit is largely a result not of current spending but of the bursting of the housing bubble and Bush’s tax cuts for the wealthy. (I will concede, however, that the wars in Iraq and Afghanistan do constitute a good portion of the projected deficits and that a balanced budget amendment might make it more difficult to go to war.) 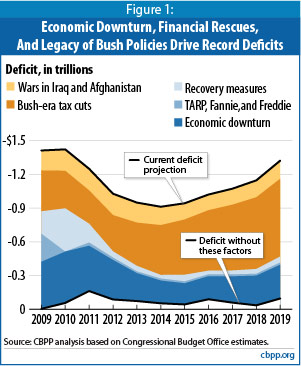 Back to the long-term problem. If we had the same health care costs as Canada, there would be no long-term “deficit problem” , plain and simple. Therefore, if we have any concern about our deficit, it would be to control health care spending, and deal with other deficit problems like reversing bush’s tax cuts on the wealthy, increasing tax progressivity once the economy recovers (take the top rate to 40%, move capital gains back to 25% or higher, create a stock transaction tax, etc.), create larger short-term deficits to “outgrow” the debt (aggregate demand), and decrease military spending (Iraq, Afghanistan, other).

The ability of governments to run deficits is essential. As Paul Krugman acutely observed on Monday, “Both textbook economics and experience say that slashing spending when you’re still suffering from high unemployment is a really bad idea —not only does it deepen the slump, but it does little to improve the budget outlook, because much of what governments save by spending less they lose as a weaker economy depresses tax receipts.” In other words, the best way to pay down the deficit it to out grow it.

Also, what matters is the debt to GDP ratio, not “paying down the debt.” As we grow, the debt gets smaller (This is what happened in the post-war years. We never repaid the debt, it just got smaller with growth). For example, in 2008 the federal government took in $2.1 trillion in revenues. Using this number as a bench mark, in ten years – at 2.5% growth and 2% inflation – it should rise to close to $4 trillion. This means the debt would be a shrinking percentage over next decades deficits under current law.

Debt is mostly a distributional problem, not a generational problem. It’s important to point out that the generation that came of age during WWII were handed the largest debt in the nation’s history, yet they enjoyed the greatest period of shared prosperity the country ever enjoyed. We also have to remember: the investments we make today, whether it’s research and development, education, or infrastructure, is what will determine the well-being of future generations.

If we are worried about debt, the REAL solution is to attack the root problems listed above and get the economy moving again by deficit spending. Putting the budget deficit ahead of the job deficit is like worrying about cutting the lawn when the house is on fire.