It’s Not Too Late to Fix Our Future

A recent article in Vox by David Roberts highlights how a coal mining bust in Wyoming is resulting in “vulture capitalism” as investors buy up bankrupt coal mines while coal executives receive large bonuses and the communities in Wyoming struggle with thousands of laid off workers, lost pensions, environmental degradation, and an undiversified economy. This is a story all too familiar to West Virginians, especially those living in coal mining areas.

While Wyoming is beginning to see the decline of their coal industry, they are much better prepared to deal with their coal bust than West Virginia. Since the late 1970s, Wyoming, similar to other western states, created various trust funds to ensure that they would benefit from mining production long after it was gone. All together, Wyoming as about $13 billion in mineral wealth assets that are held in four trust funds that they use to fund education and general revenue expenditures. While Wyoming needs to use these assets more strategically and diversify their tax system, West Virginia has no permanent mineral assets held in long-term trust funds.

Back in early 2012 – and even before then – the West Virginia Center on Budget and Policy proposed the creation of an economic diversification trust fund that would use a small portion (1 percent) of our state’s non-renewable natural resource wealth to create a permanent source of wealth that could be invested back into the state’s economy. This proposal was modeled after Wyoming’s Permanent Mineral Trust Fund. In fact, the former Governor of Wyoming, Mike Sullivan, testified to the West Virginia Senate in 2012 about West Virginia creating its own “Future Fund.” While the West Virginia legislature eventually passed a “Future Fund” in 2014, it has not – and probably won’t for the foreseeable future – receive any deposits mostly because of the restrictions in place.

While it is not too late to plan for West Virginia’s future by funding the WV Future Fund, West Virginia would be in a much more fiscally sound place had it done so in 2012. If West Virginia would have enacted a mineral trust fund in 2012 based on our proposal – which included a 1 percent additional severance tax on oil, natural gas, and coal – it would have a balance of over $800 million today, which is larger than both of our state’s Rainy Day Funds combined. 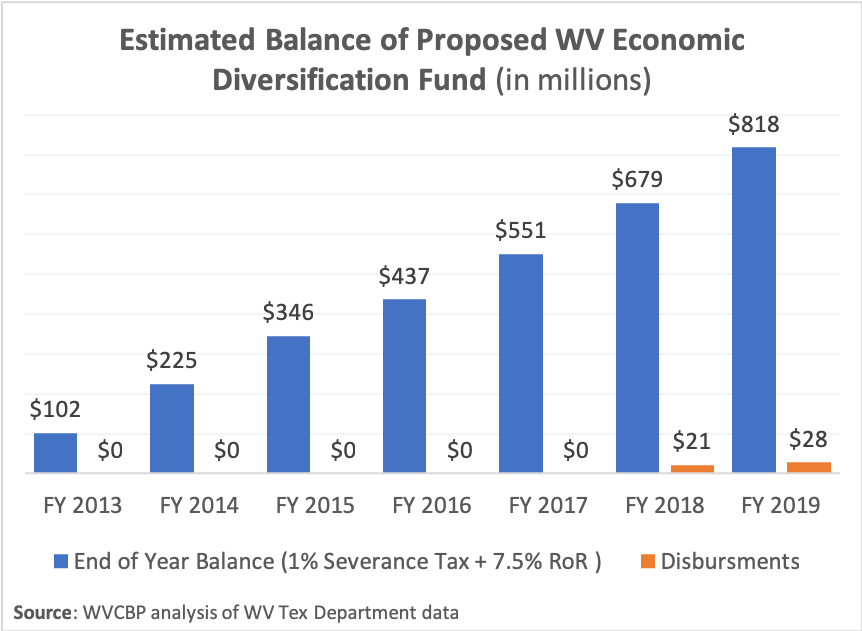 According to our proposal, withdrawals from the fund would begin five years after its creation and the assets would be invested similar to our state pensions, which include a 7.5% average annual rate of investment return. After five years of receiving deposits, the state would use five percent of the average annual balance of the five previous years to invest in economic diversification, including education, infrastructure, etc. As the chart indicates, the fund would have been able to disburse an estimated $21 million last year and about $28 million this year toward economic diversification efforts.

As policymakers continue to look for ways to diversify our state’s economy, it is imperative that they use the state’s rich non-renewable depleting natural resources to help make this happen since they are at the heart of our state’s boom and bust economy. Policymakers also need to keep in mind that addressing climate change – such as achieving net-zero emissions by 2050 to avoid global environmental catastrophe – will mean significant reductions in coal and natural gas production in West Virginia, leaving the state even more vulnerable to economic busts in the future.

While time is running short, the path toward a sustainable economic future is still possible if policymakers take the necessary steps to adequately tax our fossil fuels to invest in our communities and people. Otherwise, our state will be on collision course with efforts to combat climate change and will most likely continue to decline. By fixing the WV Future Fund we can start turning our non-renewable natural resource assets into a permanent source of wealth that can provide a source of funding to not only diversify our economy but also provide a bridge to a more prosperous future.