Blog Posts > Is it a Good Time to Reduce Male Wages in West Virginia?
December 16, 2014

Is it a Good Time to Reduce Male Wages in West Virginia?

As the legislature considers repealing the state’s prevailing wage for public construction projects, it is important to recognize that it could further depress wages. This is especially true for male workers, who typically hold over 90 percent of construction jobs.

Since the late 1970s, male hourly wages have declined by more than $3 in West Virginia after adjusting for inflation. In many ways, the collapse in male wages over the last several decades is at the heart of many of our state’s social and economic problems. When families’ wages stagnate or decline, those families struggle to make ends meet, save for retirement and college, spend time with their kids, and help make their communities a better place to live. This also means less tax revenue to invest in the important public structures like education and infrastructure that provide a backbone for strong economic growth and poorer health. 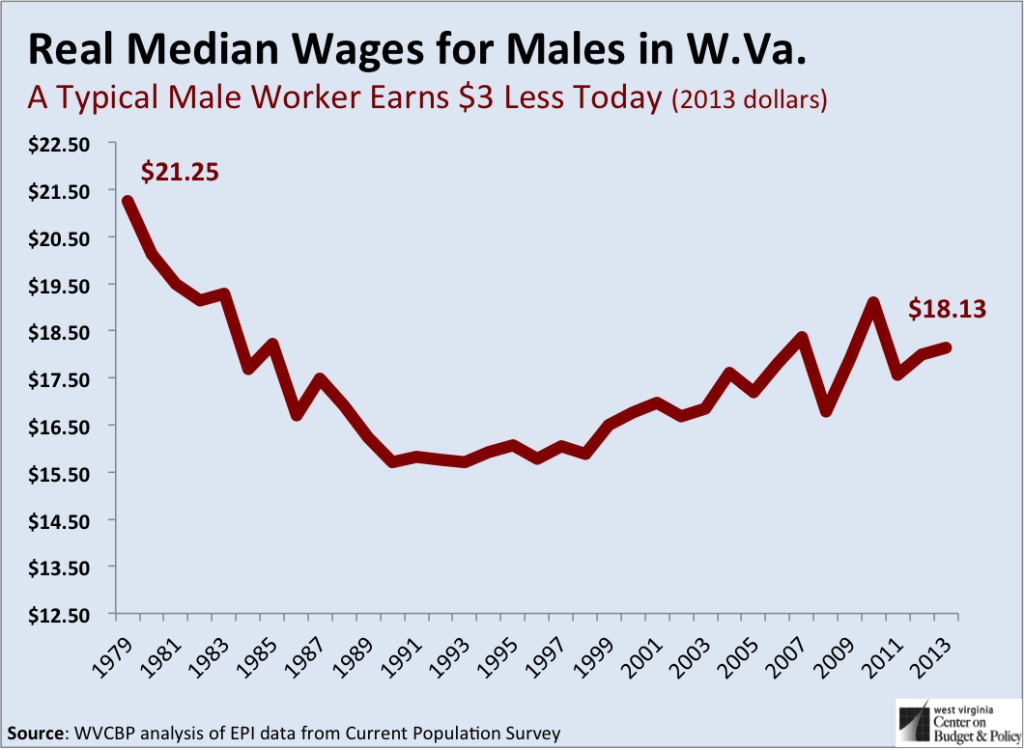 The decline in male wages over this period has to do with a several factors including the decline in unionization, the collapse in blue-collar jobs such as manufacturing and coal mining in the state, the wage gap between educational attainment, and federal and state policies that have put downward pressure on wages.

Unions play a vital and substantial role in pulling up wages not only for their members but also other workers. As we noted in a previous report, union members in West Virginia earn $5 more per hour than non-union workers and are more likely to have benefits like health and pension coverage. Historically, males made up a much larger share of the union workforce (65% in 1983) but today women now account for about half of all union members (48% in 2013).

As the chart below highlights, union membership in West Virginia and the United States has declined dramatically over the last 50 years. At its peak in 1981, nearly 40 percent of all workers in West Virginia were members of a union compared to just under 13 percent today. 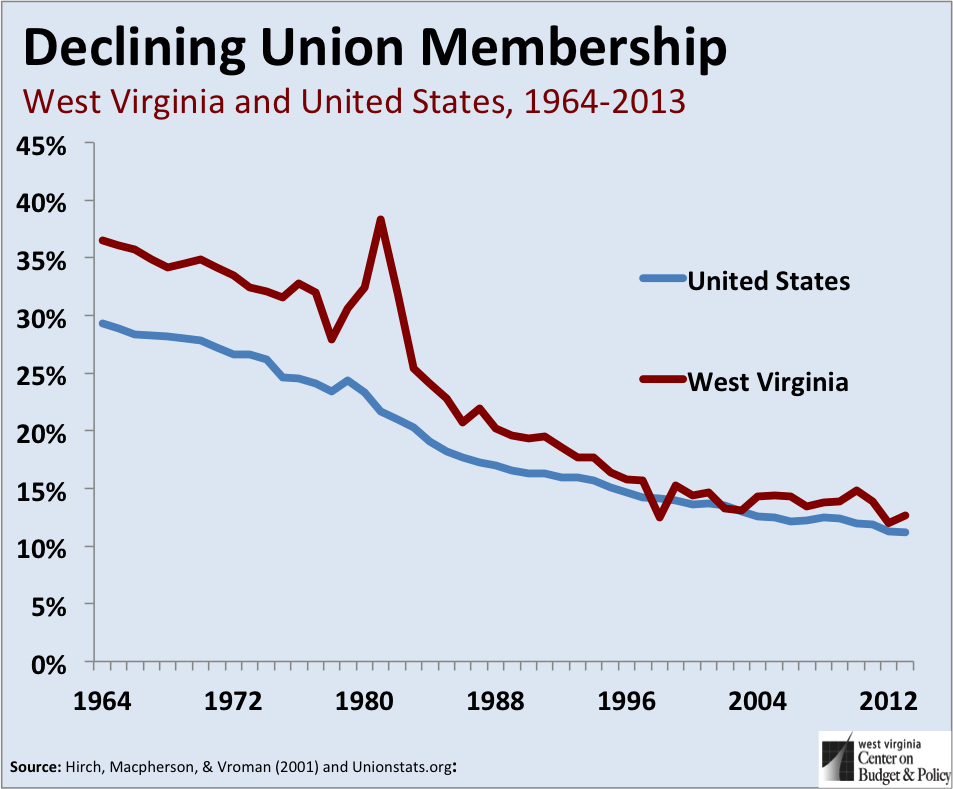 A recent study by scholars at Harvard University and the University of Washington found that declining unionization was responsible for about a third of the wage inequality for men between 1973 and 2007. The same study found that the educational pay gap accounted for another third of the increase in wage inequality for men. While workers in West Virginia have made substantial progress in acquiring post-secondary degrees since the late 1970s, West Virginia continues to lag behind most states in having a smaller knowledge-based economy. With a lower share of workers with college degrees, the result is lower wages.

Another reason for the decline in male wages is the collapse of goods-producing jobs like manufacturing and coal mining and the transition to lower-paying service jobs. As we documented in the 2013 State of Working West Virginia, in 1979 Weirton Steel was the largest employer in the state with 14,000 employees. Today, it’s Wal-Mart where average wages are fraction of what they were at Weirton Steel.

Since 1979, West Virginia has lost over 77,000 manufacturing jobs and 42,000 coal mining jobs. These jobs are still primarily held by males, according to the Bureau of Labor Statistics. 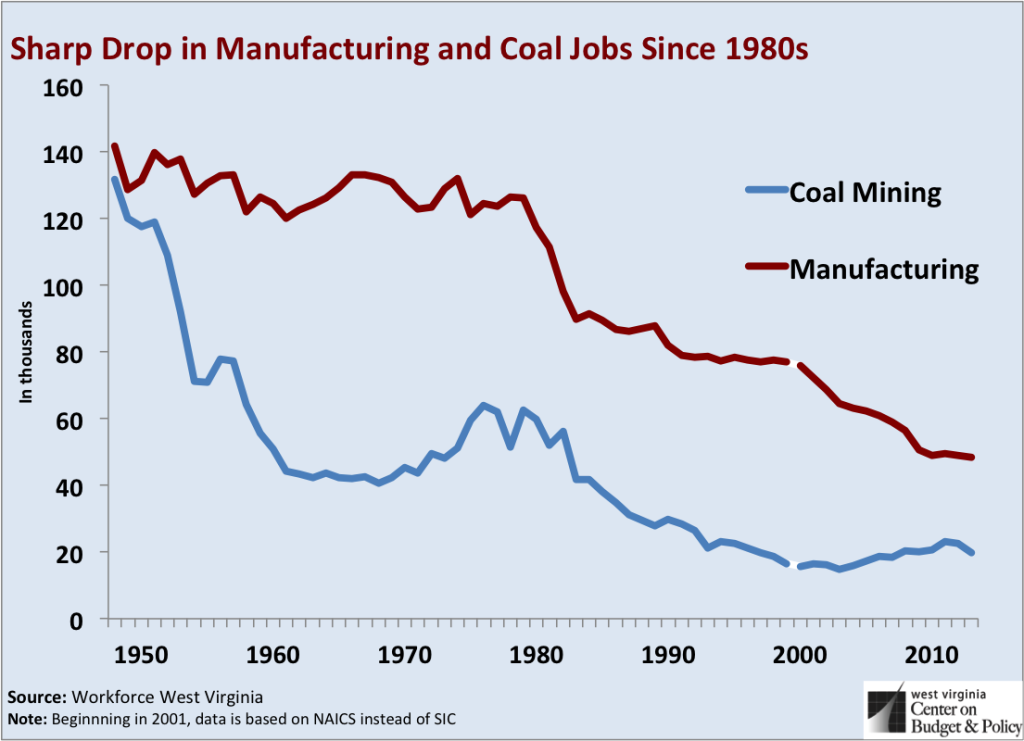 Federal and state policies have also resulted in the decline of male wages. As economist Heidi Shierholz noted last year:

Unlike the postwar period, when economic policy supported the expansion of good jobs, for the last 35 years, the focus has been on policies that were advertised as making everyone better off as consumers through lower prices: deregulation of industries, the Federal Reserve Board’s prioritizing low inflation over full employment, weakening of labor standards including the minimum wage, a “stronger” dollar — which costs manufacturing jobs by making our goods relatively more expensive around the world and imports relatively cheaper to US consumers — and the move toward fewer and weaker unions.

Males wages in the state could decline further in the upcoming years as the legislature considers repealing the state’s prevailing wage law for public construction projects and by making it much harder for workers to join unions by becoming a “right-to-work” state. Instead of pursing policies that will further depress wages, the state should be investing more in education, early childhood development, and projects that diversify our economy and lead to higher wages for all.