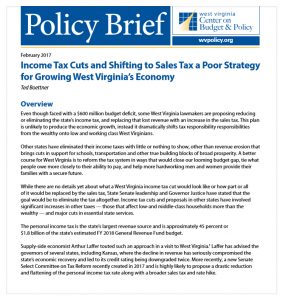 Even though faced with a $600 million budget deficit, some West Virginia lawmakers are proposing reducing or eliminating the state’s income tax, and replacing that lost revenue with an increase in the sales tax. This plan is unlikely to produce the economic growth, instead it dramatically shifts tax responsibility responsibilities from the wealthy onto low and working class West Virginians. PDF of policy brief.

Other states have eliminated their income taxes with little or nothing to show, other than revenue erosion that brings cuts in support for schools, transportation and other true building blocks of broad prosperity. A better course for West Virginia is to reform the tax system in ways that would close our looming budget gap, tie what people owe more closely to their ability to pay, and help more hardworking men and women provide their families with a secure future.