The graph below uses the GINI Index from the American Community Survey to measure the income inequality of households in West Virginia and the United States. The index varies between zero and one. A value of 1 indicates perfect inequality – where only one household has any income – and a zero value indicates perfect equality  –  where all households have equal income. 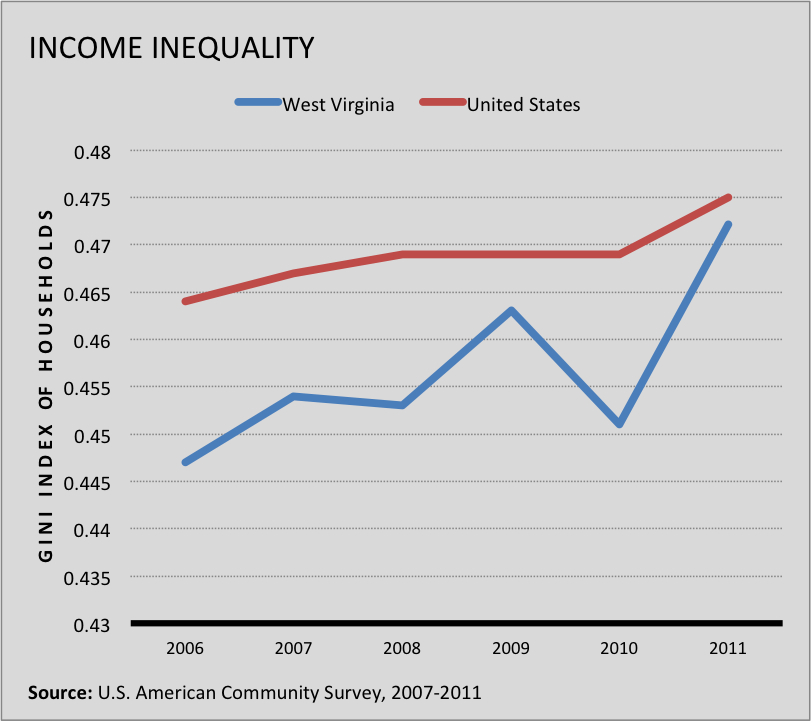 Nationally, income inequality has been growing rapidly over the last several decades. For example, the share of total pre-tax income going to the top 1 percent of households was about 9 percent in 1975 compared to 20 percent in 2010. While there are many factors at play – including race and gender disparities, distribution of assets, the rapid rise of CEO pay, education and technology –  the biggest factor is policy that has been  designed to distribute money upward over the past several decades.  Below are a couple of examples.

–  Minimum Wage. According to economist Dean Baker, if the minimum wage had kept pace with productivity growth since the late 1960s, it would be close to $18 an hour today. Unfortunately, West Virginia – unlike 18 other states – does not have a minimum wage above the federal minimum wage of $7.25 an hour. This could be remedied at the federal or state level.

–  Taxes. A recent report by the non-partisan Congressional Research Service (CRS) found that not only are lower federal taxes on the wealthy not associated with higher economic growth, but that they are exacerbating income inequality. CRS concluded that “the top tax rates appear to have little or no relation to the size of the economic pie. However, the top tax rate reductions appear to be associated with the increasing concentration of income at the top of the income distribution…(and that)lower top tax rates may be associated with greater income disparities.” Steps to improve this disparity include increasing the share of taxes paid by the wealthy,  such as taxing capital gains at the same rate (35% instead of 15%) as ordinary income. At the state level – where low and middle income West Virginia pay a higher share of state and local taxes as a share of income – we could create a refundable state Earned Income Tax Credit modeled after the federal one that would reduce tax regressivity and promote work.

–  Unionization. As economist Timothy Noah recently pointed out, “if you graph a line charting the decline in union membership and then superimpose another line charting the decline in middle-class income share, the lines will be nearly identical. That is not a coincidence.” One proposal to help revitalize unions in America would be to amend the Civil Right Act to include “disciplining or firing an employee on the basis of seeking union membership” illegal just as it now is on the basis of race, color, sex, religion and national origin.” As Dean Baker has pointed out,   “the fact that unionization rates have plummeted is almost certainly due in part to policies that have made it more difficult to unionize. Canada, which has a very similar economy and culture, has not experienced a decline in unionization rates of the same magnitude.”

While these are just some examples of how we can curb income inequality in the Mountain State, they would go a long way to giving workers more bargaining power over their declining wages and help ensure that the wealthy pay their fair share in taxes.