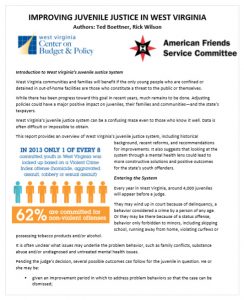 Every year in West Virginia, around 4,000 juveniles will appear before a judge. Pending the judge’s decision, a juvenile may be given an improvement period to address the behavior, put on probation, referred to a special court, or committed to some form of out-of-home placement. However, the state’s juvenile justice system can be confusing and data is often difficult or impossible to obtain.

This report provides an overview of West Virginia’s juvenile justice system, including historical background, recent reforms, and recommendations for improvements. It also suggests looking at the system through a mental health lens could lead to more constructive solutions and positive outcomes for the state’s youth offenders. “When West Virginia confines a young person for a minor, non-violent offense, too often it puts him or her at risk of being drawn more deeply into the criminal justice system,” said Sean O’Leary, West Virginia Center on Budget and Policy Interim Executive Director. “While the state has recently embarked on the path of juvenile justice reform, there is still more work to be done. A greater focus on juvenile mental health would help West Virginia build on its recent progress.”