This past legislative session, the House introduced House Bill 3136 that directed the WV DHHR to apply for a Section 1115 waiver to implement Medicaid work reporting requirements on all non-elderly adults in enrolled in the program. If enacted, and approved from the federal government (CMS), it would force thousands of people who do not report a set number of hours worked each month to lose their Medicaid health coverage.  The vast majority would become uninsured. This would likely lead to poorer health outcomes, more financial insecurity for low-income people, and reduced revenues for hospitals while raising health care costs for everyone because of increased emergency room visits and hospitalization.

Arkansas is the only state to implement a Medicaid work requirement and over 18,000 people (or about a quarter of those subject to the requirement) lost coverage in six months. Most of those losing coverage became uninsured and the requirement didn’t boost employment or improve health outcomes, research shows. Studies also show between 23 and 45 percent of low-income adults subject to Medicaid work requirements will lose coverage within a year because they can’t meet the work requirements or have difficulty completing the necessary paperwork. For those enrolled in West Virginia’s Medicaid expansion, this means that between 38,000 and 71,000 West Virginia adults enrolled would lose Medicaid coverage.

In June 2019, there were 163,428 people enrolled in Medicaid expansion in West Virginia. Based on conservative estimates from the experience in Arkansas, approximately 38,000 enrollees (or 23% of those with expansion coverage) in West Virginia would lose their Medicaid coverage within the first year if a work requirement was in place. This would not only increase the number of uninsured but would lead to an estimated $213 million in lost federal dollars for healthcare in West Virginia. Below is breakdown of the lost Medicaid coverage and federal dollars (expressed in millions) by county.

These figures do not include other adults on traditional Medicaid who could also lose coverage under a Medicaid work requirement. The figures below also assume the waiver approved in West Virginia would be similar to Arkansas, which is a much less restrictive requirement than what was proposed in HB 3136. For example, HB 3136 requires all non-elderly adults (18-64) to be subject to work reporting requirements, while Arkansas only required adults between 18 and 49 years of age. Moreover, those subject to Arkansas’s reporting requirement would lose coverage if they don’t meet the hours requirement in three months in a calendar year while West Virginia beneficiaries would lose coverage in just one month. 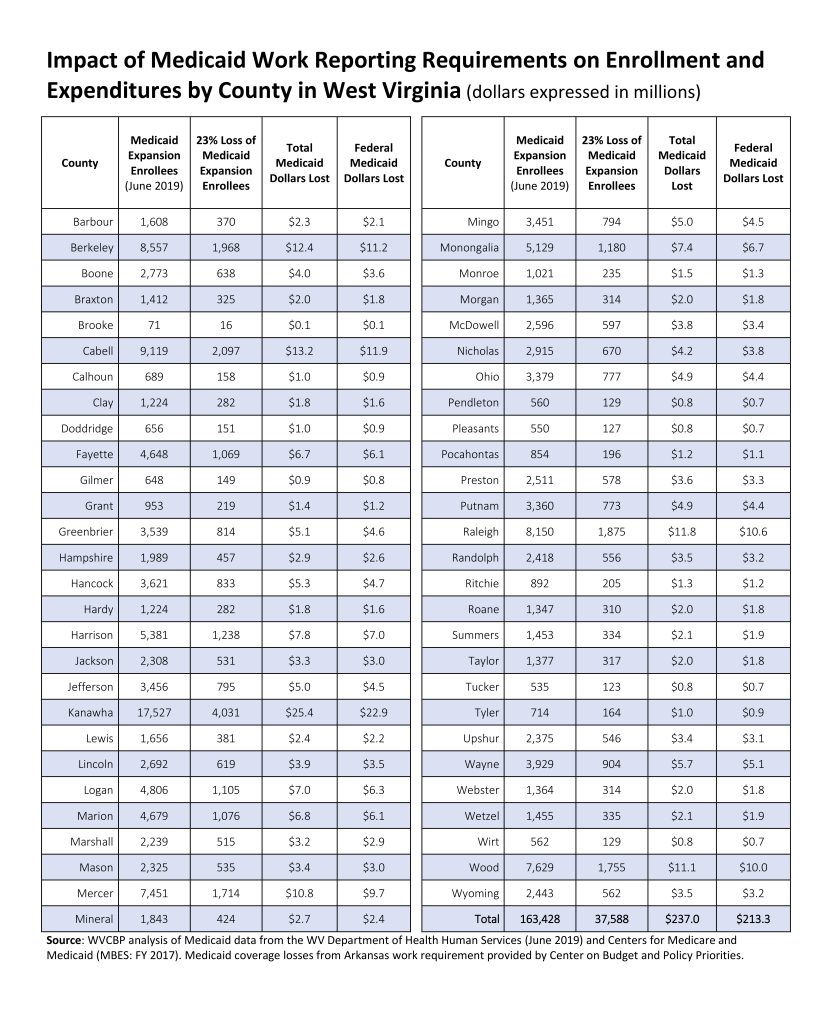 There are several reasons why Medicaid work requirements are ineffective, burdensome, and harmful:

People will fall through the cracks

“Work requirements” DO NOT promote work

There are proven ways to promote work for low-income individuals

Methodology: Estimates for the number of WV Medicaid expansion members who would lose Medicaid coverage are derived from using the share of adults who were subject to the work requirement in Arkansas who lost coverage. Between June 2018 and December 2018, 18,164 adults – or 23 percent of those subject to the work requirement – lost Medicaid coverage in Arkansas. Important to note Arkansas’ Medicaid work requirement was less expansive as WV House Bill 3136 (2019) that subjected all non-elderly adults to the work requirement, not just the expansion population. Based on Arkansas’ experience, at least 37,588 (23%) people would lose Medicaid coverage in the expansion population alone in West Virginia based on June 2019 enrollment. To calculate federal dollars lost from the reduction in Medicaid enrollment, the above estimates used FY 2017 expenditure data from the Centers for Medicare and Medicaid Services (Medicaid Budget and Expenditure System) that shows total expenditures on the Medicaid expansion population (Newly eligible, VIII Group) in West Virginia were $1,154,792,685 and that total enrollment was 183,100. This equates to a per member expenditure of $6,307. The federal match rate of 90 percent (FY 2020) was applied to the per member expenditure.