How many “Coal Miners”? 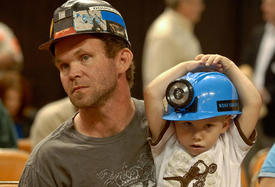 This picture in yesterday’s Charleston Daily Mail got me thinking about how many workers in West Virginia wear a hard hat with a lamp each day. While the best estimates (see here and here and here, and here ) say about 20,000 people work directly in the state’s “coal industry,” most of these workers are not “coal miners” per se.  They are truckers, supervisors, engineers, electricians, office workers, CEOs, and other occupations.  I could be wrong, but I think a lot people might mistakenly believe that there are 20,000 workers that put on a hard hat with a lamp.

While the coal mining hard hat lamp is symbolic of the mining industry and our culture, the number of workers who wear one everyday is probably less than 5,000.

While it’s impossible (at least I can’t find it) to find out how many miners do work directly in underground and surface mining, the BLS’s Occupation Employment Statistics program can provide some insight. 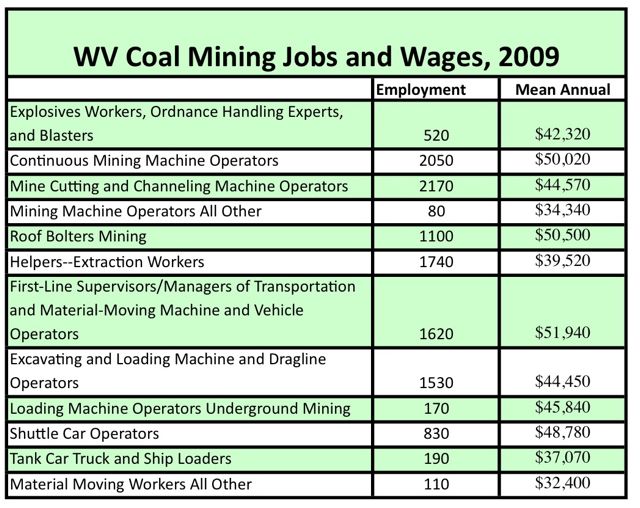 The table above lists several occupations in the “coal industry” and several that could be described as “coal miners.” Continuous mining machine operators, roof bolters, and loading machine operators are occupations that involve direct extraction in underground mining (3,320 workers).  Surface mining occupation “could” include mine cutting and channeling machine operators, explosives workers, and dragline operators (4,220).  The table above also offers some insight into pay. In 2008, underground coal miners made between $45,000 and 50,000 a year on average. However, this doesn’t include overtime pay, deferred compensation (401k plans), and health care subsidies.  According to the West Virginia Coal Association , the average annual pay in 2008 was $62,700.