How did West Virginia’s Budget Weather the Great Recession? (Wonkish)

Last week, the Center on Budget and Policy Priorities updated their list of states with budget shortfalls in FY 2012. As you can tell from the chart below – or from reading the paper last week – the Mountain State is one of 6 states that does not have a budget shortfall in the upcoming fiscal year. In fact, our base-budget (General Revenue + Lottery Funds) is about $250 million more than last year’s budget. 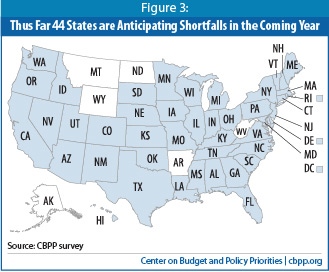 Why is West Virginia one of the few states without a budge shortfall? While lean fiscal management is part of the answer, it is certainly not the biggest reason.  The central reason West Virginia has weathered the recession fairly well is the make-up of its economy, its aging population, and especially the Recovery Act.

Let me explain in more detail.

While the Great Recession officially began in December 2007 and ended June 2009, the economic recovery has been anemic for most part of the country. For West Virginia, we’ve seen a large drop in labor force employment over the last 3 years, but a steady rise in non-farm jobs.  West Virginia has lost 1.5% of its job base, compared to the US average of 5.6% (Dec-07–Jan-11). All together, West Virginia has lost fewer jobs than 45 states. This is the single largest reason why the state has been able to weather the recession better than most states. And a lot of it has to do with West Virginia being an energy state.

However, West Virginia has preformed better economically than most states for several other important reasons:

Unlike many states, West Virginia did not see rapid growth nor a rapid drop in housing prices. The chart below shows the five-year change in home prices, from 2005 to 2010. As you can tell, the states that suffered the worst from the housing bubble – Nevada, Florida, California, and Arizona – have seen rapid declines in home values. West Virginia, on the other hand, has seen home values increase by 6.3 percent over this period.

While the national run up in housing prices did not dramatically impact West Virginia (except in the eastern panhandle and a few other areas), when the housing bubble collapsed it reduced household wealth by about $8 trillion and plunged the nation into a recession. This zapped about $3 trillion dollars in U.S. economic output in 2009 and 2010, which ultimately lowered demand for West Virginia goods and services, but it didn’t zap the wealth of our residents as much as it did in other states.

The financial industry makes up a smaller share of total employment in West Virginia, 3.8%, than any other state in the nation (aside from DC). According the BEA, finance and insurance makes up about 4.8% of our state’s GDP compared to a national average of 8.3%. From 2007-2009, employment in the financial industry declined by 7% on average and only by 5% in West Virginia. 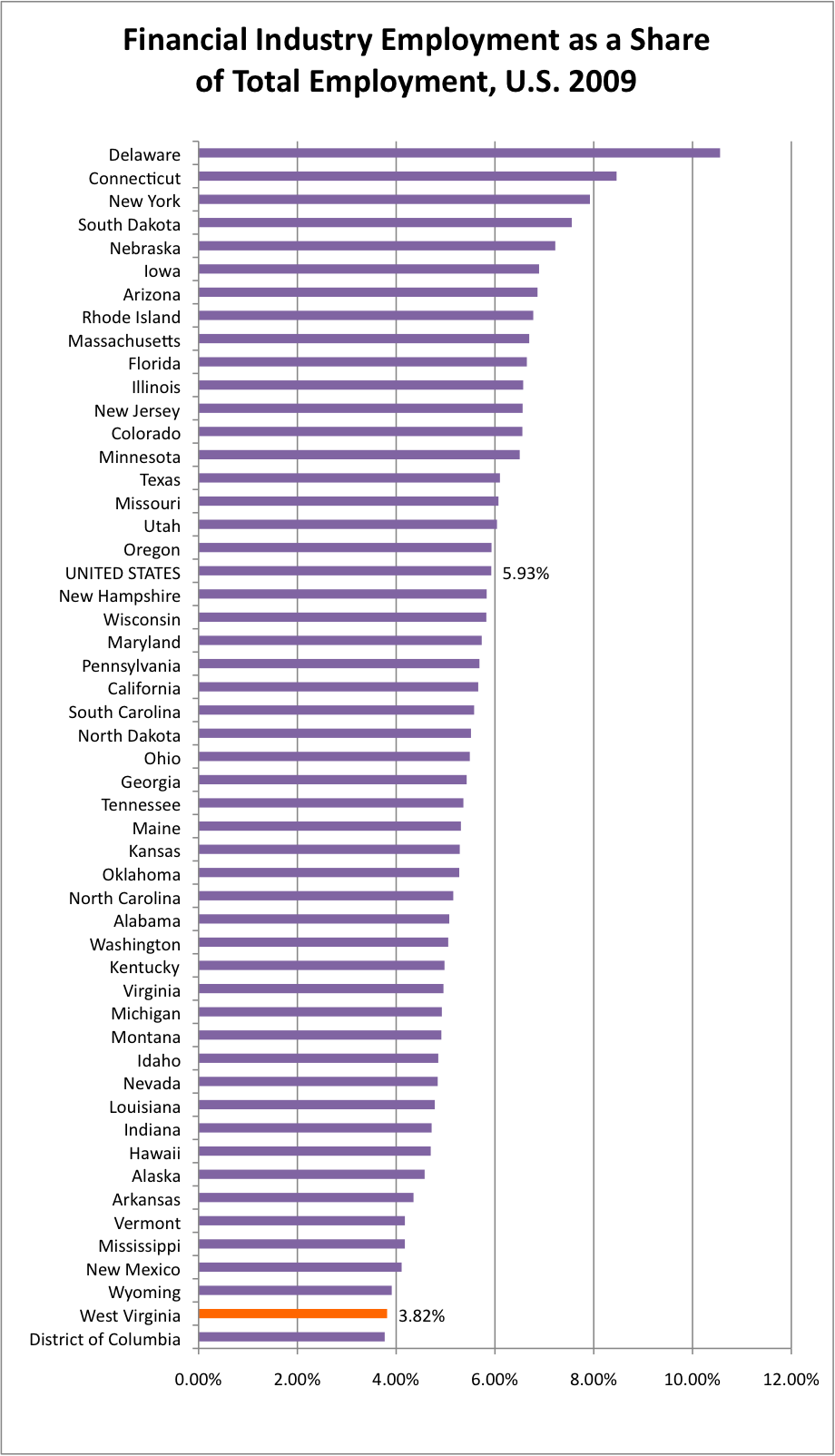 By being less reliant on the financial sector for jobs and revenue, the Mountain State was able to avoid some of the revenue problems that have plagued other states.

As Sean pointed out here, West Virginia relies for more of its income from transfer payments (mostly Social Security) than any other state in the country. This mostly due to the fact that West Virginia has the second oldest population in the nation. Therefore, the state receives a higher share of Social Security payments.   Unlike wage income that fell during the recession, transfer payments (including one-time Social Security payments) actually increased due to the Recovery Act  – the bulk of which rose when the state was sliding deep into the recession (2nd Quarter 2010).

West Virginia was also well positioned (due to being a low-income state) to benefit disproportionally from other parts of the Recovery Act, including tax credits (e.g. Making Work Pay, Child Tax Credit, EITC, etc.) and increased eligibility in food stamps (SNAP).

In short, we are poor and we are old.

The Recovery Act provided about $728 million in state aid, including about $462 million in enhanced Medicaid funding, $218 for K-12 and higher education, and $48 million for general government services. (The reason the Recovery Act provided aid for public education and Medicaid is that they represent over half of all state expenditures.) So far, the state has spent about almost all of these funds and has received an additional $136 million when Congress appropriated additional state aid in August 2010.

Without the state fiscal relief included in the Recovery Act, West Virginia would have had to cut an additional $250-$350 million from both its FY 2010 and FY2011 budgets to stay at the previous year’s level.