On Wednesday, the House Finance Committee originated HB 3137 that would reduce the state’s five personal income tax rates by a half of a percentage point (0.5%) each time a newly created “personal income tax reduction fund” that is funded by online sales taxes and lottery revenues reaches a balance of $200 million. Since higher-income people would benefit from each marginal tax rate reduction, they would see the biggest tax cuts from this proposal. The proposal would eventually lead to large compounding revenue losses and budget holes that would likely require more cuts to schools, colleges, and other budget priorities or tax increases that will most likely fall on working families.

According to the bill, beginning on January 1, 2019, the Personal Income Tax Reduction Fund (the fund) would receive all sales and use taxes collected from out-of-state online retailers (estimated at $20 million per year) while also receiving an undetermined amount of revenues from lottery funds and any additional appropriations designated by the legislature. When the balance of the fund reaches $200 million at the end of the fiscal year (June 30), the personal income tax rates will reduce by half of a percentage point (0.5%) beginning Jan 1st of the following tax year while the $200 million will be deposited from the fund to the General Revenue Fund. This process would continue to repeat in perpetuity until the personal income tax is eventually eliminated. It is unclear how long it would take each time to accumulate $200 million into the fund to trigger the income tax rate reductions but they can begin as soon as 2020.

Another scenario would be that the trigger is met for year one, and then not met for several years. In each of those years there would not be a revenue deposit from the fund to the General Revenue fund but the state would have a revenue loss of at least $200 million. In other words, the cost of the tax cuts is ongoing year to year, but the fund only replaces all or some of the revenue lost in one particular year when the trigger is met. Furthermore, the $200 million trigger does not take into account inflation or the growth annual rate of personal income tax collections that would erode revenue even further.

Currently, West Virginia’s personal income tax rates starts at three percent on income under $10,000 and tops out at 6.5 percent on income over $65,000, as shown in the table below. Because West Virginia has a progressive income tax structure, as income increases so does the rate at which it is taxed. The state’s tax rates are also marginal. For example, if your taxable income is $150,000 (after any deductions, credits, or exclusions) this does not mean that all of your income will be taxed at the top rate of 6.5 percent. Your first $10,000 is taxed at three percent, the next $15,000 at four percent, and so on. Only the last $90,000 is taxed at the top tax rate of 6.5 percent. 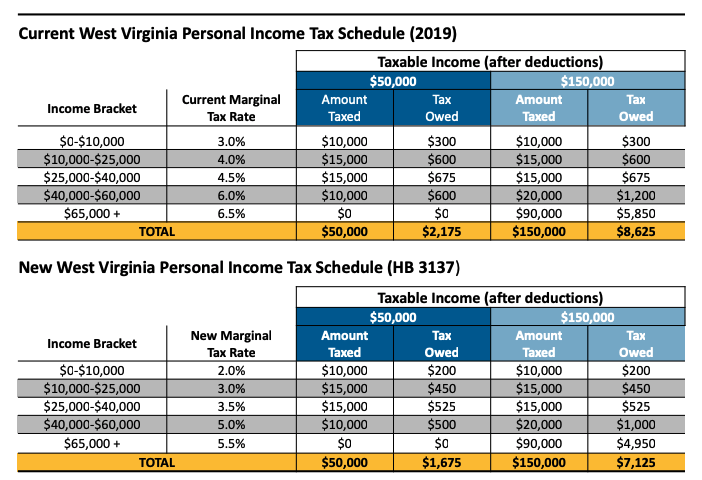 While the table shows the impact of a one percentage point reduction (1%) on two tax filers based on taxable income, the graph below shows the impact of cutting personal income tax rates by income group in West Virginia. According to the Institute on Taxation and Economic Policy, a one-percentage reduction in each personal income tax rate would give a West Virginian with an income between $36,000 and $56,000 an average tax cut of $231 compared to $6,044 for someone in the top 1 percent with an income of above $451,000. This means someone in the top 1 percent would receive on average a tax cut that is 26 times as large as someone in the middle 20 percent. This is because wealthier West Virginians benefit the most from each rate reduction, especially the top marginal tax rate that drops from 6.5% to 5.5%.

In fact, 62 percent of the estimated $396 million in tax cuts from reducing each of the income tax rates by 1 percentage point go to the top 20 percent of income earners that make over $91,000. Meanwhile, the majority of West Virginians in the bottom 60 percent only receive 17 percent of the total tax cuts. 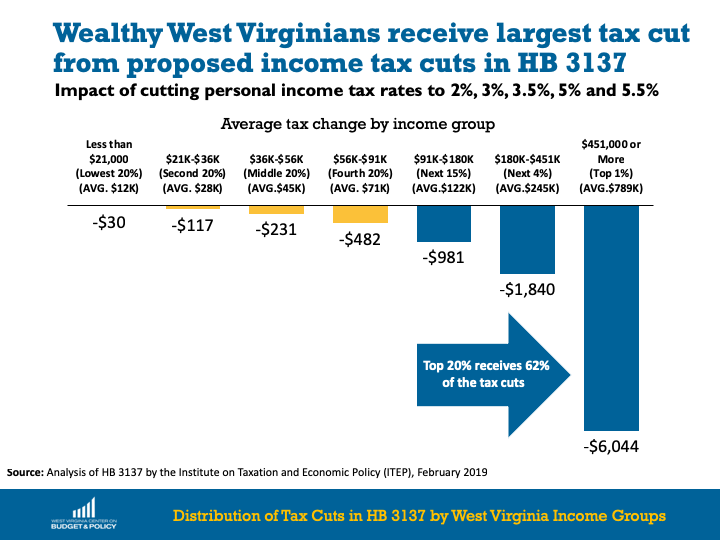 HB 3137 is a poorly designed tax cut that will not only lead to large revenue losses but will also further exacerbate income inequality in state. While West Virginia is currently running revenue surpluses, our state faces significant funding shortages in our schools, colleges, health and human services, and other areas. If lawmakers want to cut taxes they need to start from the bottom up, not the top down, and the cuts need to be fiscally sound and balanced.