The House of Delegates version of the FY 2018 budget bill has been introduced. The House budget spends $258 million less in General Revenue than the Governor’s proposed budget, balancing the budget largely through spending cuts. 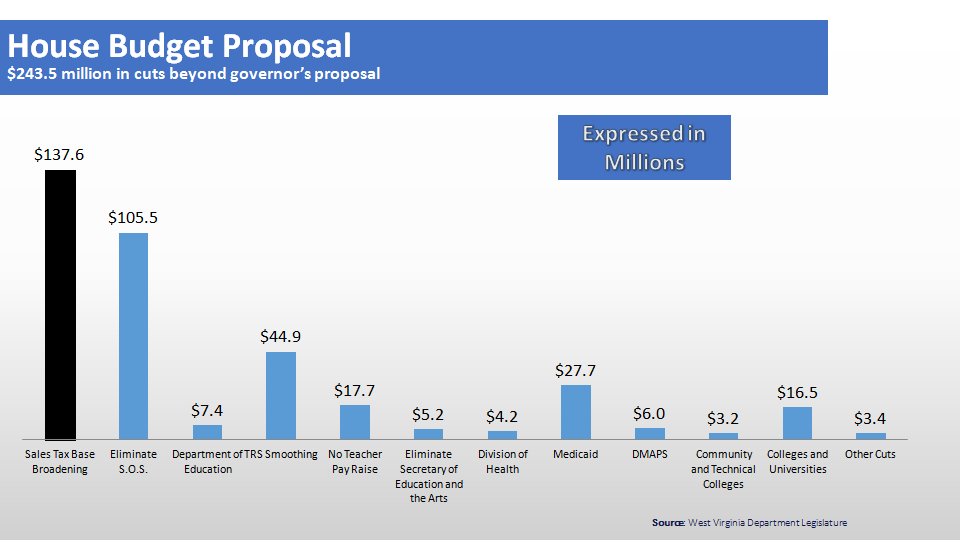 Unlike the Senate proposal, the House budget relies on new revenue from SB 484, which expands the sales tax base to include to telecommunications, personal services, and “direct-use” taxes on purchases by communications and transportation businesses. This would raise $137 million in new revenue for FY 2018. However, provisions in the bill reducing the sales tax rate in later years would eventually result in decreased sales tax revenue.

As does the Senate bill, the House budget bill eliminates funding for the governor’s proposed Save Our State fund, and also “smooths” payments for the Teacher’s Retirement System.

Under the House proposal the Office of the Secretary of Education and the Arts would be eliminated, and various Education and Arts programs moved to other areas of the budget.

General Revenue funding for Medicaid is cut by $42 million, which is partially offset by increased lottery appropriations. Other DHHR programs are cut by a total of $4.2 million, including eliminating funding for Tobacco Education, Cardiac Project, Center for End of Life, Osteoporosis and Arthritis Prevention, the Women’s Commission, and Healthy Lifestyles.

DMAPs is cut by $6 million, with most of the cuts coming from the Division of Corrections.

The House bill also zeros out funding for all public colleges in the state, and instead appropriates all the funding to the Higher Education Policy Commission and the Council for Community and Technical colleges. In total, the amount appropriated is effectively a $19.7 million cut from the governor’s proposal, but the House leaves it to the HEPC and CCTC to determine which colleges will be cut and by how much.