The House and the Senate have advanced two similar tax bills that make substantial changes to the state’s personal income and sales tax, which account for over 75 percent of state general revenue fund collections. Both of these bills will shift the tax load from the wealthy onto working families. It is unclear how either of them will help balance the state’s looming budget deficit or make the investments needed to address many of the state’s major problems.

House Bill 2933, which was amended and passed out of House Finance Committee late on Friday without a fiscal note, makes several changes to the sales and personal income tax. On the sales tax side,  HB 2933 broadens the sales tax base to include mobile homes, telecommunications (e.g. cellphones), professional (legal, accounting, etc.), personal (barber shops, messages, etc.), and contract services (e.g. home repairs/renovations), lowers the sales tax from 6 percent to 5 percent, and taxes groceries at 3 percent. 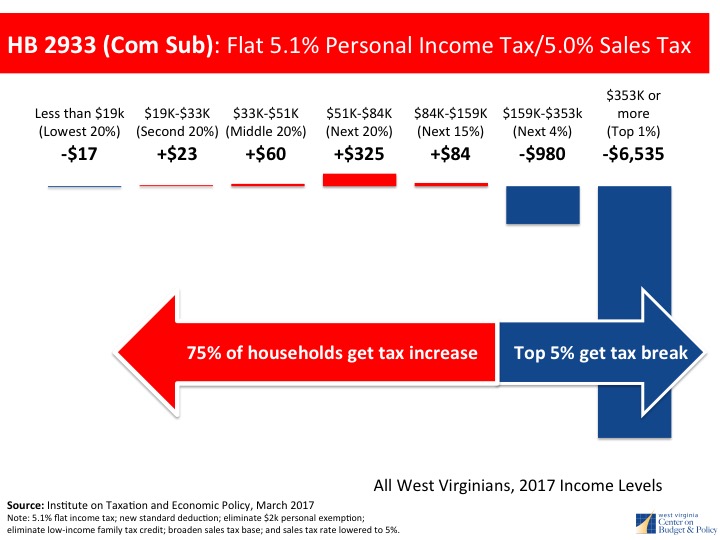 The last substantial change to the state’s tax system in SB 409 is removing property tax revenue caps. Currently, property tax revenues cannot grow by more than 1 percent per year for counties and municipalities, and 2 percent per year for county school boards unless it is because of new construction or improvements to existing property. SB 409 would allow some counties that are growing to take this additional property tax revenue and deposit into a new fund for schools.  While removing these revenue caps is sound policy, it is unclear from the language in the bill how this would impact local government finances or the school aid formula.

One common argument given for a flat income tax is that it will boost our state’s economy because it lowers taxes on businesses and the wealthy. This is a strategy that is not supported by evidence from other states or mainstream economic research. Since 2010, more than a dozen states have cut their income tax rates, with Kansas, Maine, North Carolina, Ohio, and Wisconsin embracing the largest reductions in income taxes. Of these states, only North Carolina has experienced faster employment and income growth than the nation as a whole in the years immediately following their cuts.

While North Carolina experienced slightly higher income and job growth than the nation as a whole after shifting to a flat income tax in 2014, the state is adding jobs more slowly than most of its neighboring states. 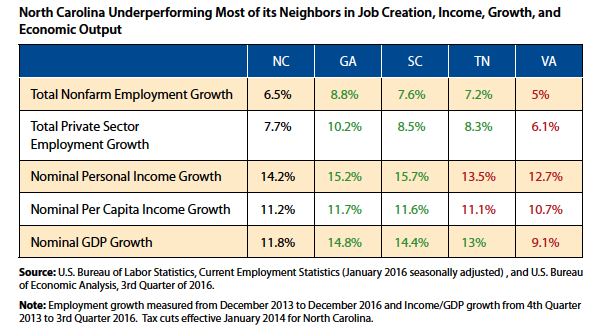 The mediocre results in states that have cut their income tax rates is aligned with the findings of mainstream academic research, which typically finds that income tax levels provide little to no impact on economic growth. After reviewing major studies published in academic journals since 2000 that examined the effect of state personal income tax levels on broad measures of state economic growth, the Center on Budget and Policy Priorities concluded that “of the 15, 11 found no significant effects and one of the others produced internally inconsistent results.” This means for every one academic study that found personal income taxes boosted state economic growth, there were about four that found no significant effects.

A recent study conducted by the nonpartisan Tax Policy Center further undermines the claim that states can improve their economies by cutting personal income taxes. It found that personal income taxes have a statistically insignificant impact on growth. This study replicated a 2008 study by economist Robert Reed that many tax-cut proponents often cite that found evidence that income tax cuts increase economic growth. The TPC study mirrored the findings of a 2006 study by economist Rex Piesky that showed that higher tax states either are associated with stronger growth or have a statically insignificant impact on economic growth. Piesky concluded that the “conventional wisdom about the impact of taxes on economic growth rests on a weak foundation.”

Part of the reason that state income tax cuts fail to unleash economic growth is because the vast majority of tax payers are in no position to create any jobs. According to a recent national study by the U.S. Treasury Department, only 2.7 percent of income-tax payers own a small business with an employee other than the owner. In West Virginia, the average taxable income for businesses that paid the personal income tax in 2013 was just $21,656. Even if these businesses made enoug

money to have to pay the state’s top income tax rate of 6.5 percent, they would only pay about $1,400 on average. So reducing their taxes by perhaps a hundred dollars would produce nowhere near enough money to hire an additional worker. Since most new jobs are grown organically by in-state firms and small businesses, income tax cuts will do little to attract new out-of-state companies.

According to a recent paper by the Federal Reserve Bank of Kansas City, states with progressive, graduated personal income tax brackets have faster revenue growth compared to states with flat income taxes.

Structures that are more progressive and not indexed for inflation will experience faster growth and more volatility in revenues. Colorado is the only state in the Tenth District with a flat income tax, where all incomes pay the same tax rate. The long-run and short-run elasticities for Colorado show that its personal income tax revenues have grown more slowly than in other states and are also less volatile.

While the volatility of personal income tax collections from states with graduated income tax brackets is higher, these states tend to produce lower revenues over time.

While lowering the sales tax rate and expanding it to include more services is generally sound policy if revenue neutral, the addition of new sales taxes on business to business sales such as accounting and legal services could create “tax pyramiding” where some business may choose to produce these services themselves (vertical integration). Since only a few states tax professional services (none that border West Virginia and all below 5 percent) a new sales tax on these services may reduce employment and firms in West Virginia as business choose to locate across the border. Business will also be hurt by an increase in taxes they pay. In FY 2015, business paid $500 million in sales taxes in West Virginia compared to just $200 million in personal income taxes.

Both HB 2933 and SB 409 expand the sale tax base in an effort to pay for reducing income taxes that mostly go to high-income tax payers. This means they are shifting the tax load onto working families because sales taxes are regressive and take a large chunk of income from low and moderate-income tax payers. This is especially true with the addition of the sales tax on groceries or food for home consumption. Only 13 states tax groceries, with four states taxing them below 3 percent. Virginia is the only border state with a tax on groceries, which is 2%.

The tax bills being proposed by the Senate and House do little to nothing to address the state’s looming budget shortfall. In fact, SB 409 is expected to lead to a large decrease in revenues by FY 2019, while HB 2933 only slightly increases revenue collections. That said, it is clear that both aim to shift the tax load onto working families to pay for tax breaks for those on the top. This will not only further exacerbate growing income inequality in West Virginia, but it could lead to major cuts in services down the road like we’ve seen in Kansas that embarked on a similar tax cut and tax shift crusade. Instead of moving in this direction, lawmakers should be working to ensure that the state has the resources it needs to invest in the things communities need and asks everyone to contribute. Cutting taxes for the wealthy while increasing taxes for most West Virginians is not going to get us there.