While the last post found that state income taxes have little or no impact on interstate migration, there is also little evidence that slashing or eliminating the personal income tax is a surefire way to boost economic growth in the Mountain State. Most of the states that have followed this path recently have not experienced stronger growth, but they have seen their budget deficits grow. And this means less investment in education, infrastructure, higher education, and other important public goods that provide a foundation for a strong economy. The theory that income tax cuts for the wealthy lead to stronger economic growth is also deeply flawed and contradicted by real world experience, as we shall see.

Here are five simple reasons why we should be very skeptical about cutting income taxes on high income businesses in West Virginia:

One simple. but somewhat crude. way to gauge whether the lack of an income tax is a good predictor of economic growth is to examine the performance of states with and without an income tax. While policymakers in West Virginia have not (yet) claimed that no-income tax states are doing better than states with income taxes, high ranking officials in other states, and groups like ALEC and Americans for Prosperity, have all used this as a talking point in advocating for eliminating the state personal income tax.

According to a recent report from the Institute on Taxation and Economic Policy, states that go without personal income taxes have failed to outperform others. As the chart below illustrates, between 2002 and 2011 states without income taxes experienced slightly lower economic growth (real GSP per capita), a larger decline in household median income, and similar unemployment rates. 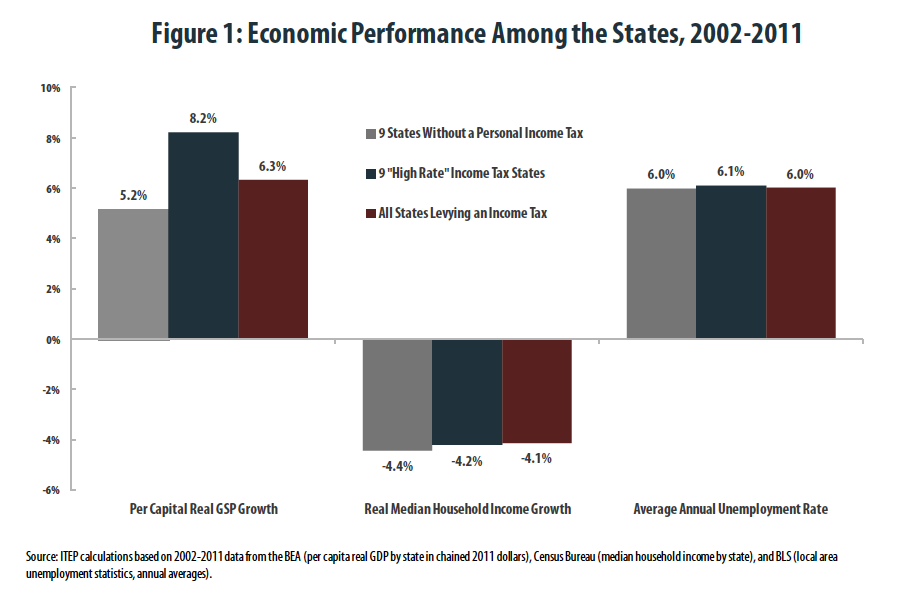 Not only is there little difference in economic performance between no-income and income tax states, but a number of states that have recently cut income taxes in the hope of boosting economic growth have not performed any better as well. From 2002 to 2007, six states – Arizona, Louisiana, New Mexico, Ohio, Oklahoma, and Rhode Island — enacted significant personal income tax cuts on the premise that it would boost economic growth. Three of these states – Arizona, Ohio, and Rhode Island – have seen their share of national employment decline, while New Mexico, Oklahoma and Louisiana have enjoyed above-average employment growth mostly due to the sharp rise in oil prices during this period.

More recently, since 2012, five states have sharply cut their personal income taxes in the hope of boosting economic growth. Of the five, only North Carolina has outperformed the nation in job and personal income growth. Despite its recent economic performance, North Carolina has made substantial budget cuts and is drastically underfunding schools, colleges and other important public services businesses need to thrive.

Kansas, which enacted the largest personal income tax cuts in recent history, has performed especially poorly. Since Kansas enacted its tax cuts (January 2013), its jobs base has grown only by 2.9% compared to the national average of 4.6% over this period (ending in April 2015) and its personal income growth was 4.3% compared to the national average of 4.6% (2012Q4 to 2014Q4). 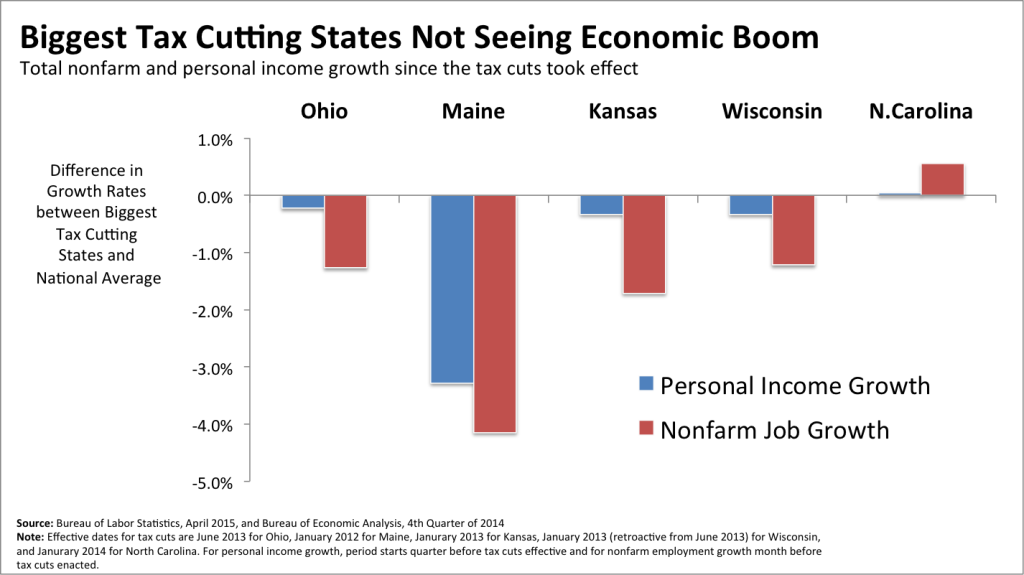 When Kansas Governor Sam Brownback enacted these tax cuts he said this would provide a natural experiment in supply-side tax cuts and that the cuts “will be like a shot of adrenaline into the heart of the Kansas economy.” The opposite has happened, along with a $400 million budget hole. West Virginia has also undergone a natural experiment in supply-side economics, cutting business taxes significantly since 2007. The results have been similar: large budget cuts along with very poor job growth.

As businesses have shifted from paying the corporate income tax to paying the individual income tax (because many companies are now pass-through businesses ), policymakers have argued that cutting the personal income tax will lower business costs, thereby boosting investment and job growth in the states that do so.

While standard economic theory predicts that business tax rates can impact whether a business chooses to locate in a particular state because lower taxes mean lower costs, this is only true if all other things are equal (Ceteris paribus) and there’s perfect market competition. Of course, this is almost never the case because there is no such thing as a free market (it is a political construct) or perfect market competition, and states never hold “all other things equal” when they make tax changes that impact public investment.

The theory also hinges on the faulty assumption that the level of taxes are large enough to influence firm behavior or that business taxes are not passed on to customers via higher prices. In reality, business investment and location decisions revolve around a host of considerations, many of which can play a much larger role than state taxes. For example, the cost of electricity, occupancy (rent), raw materials (or inputs), transportation, and labor are usually much larger costs than state and local taxes and can have a greater impact on profit margins especially in different states. As Sean has pointed out, the variations in wages across states is much larger than the savings of any proposed tax reductions.

The strategy of tax cuts to lower the cost of doing business is also focusing on a very small component of business costs. For example, according to COST, U.S. businesses paid a total of $648.8 billion in state and local taxes (including corporate and individual income taxes, sales and severance taxes, local property taxes, and other taxes) in 2012. According to the IRS, businesses in 2012 deducted $27.7 trillion in federal, state and local business taxes. This means, at the most, business taxes represented about 2.3% of the cost of doing business in the United States.* 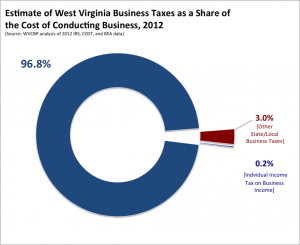 If we assume that West Virginia’s share of the $27.7 trillion is commensurate with the state’s share of national private GDP (0.42%), this pushes the share up to 3.3% based on the COST estimate that businesses paid $3.7 billion in state and local taxes in West Virginia in 2012.

Put another way, if West Virginia abolished its personal income tax it would only reduce average firm cost by about 0.2% at the most.

In sum, it is entirely reasonable to argue that state and local taxes have a relatively minor impact on corporate location decisions because they constitute a small share of business costs and their potential influence is overwhelmed by interstate differences in labor, energy, transportation, and other costs of production, which account for almost 97 percent of total corporate production expenses.

Rational profit-maximizing businesses would also consider the level of public provisions (e.g. good schools, roads, etc.), the quality of life, the supply of a qualified workers, and other state and local policies. Businesses might also look to national tax policies and national economic conditions when looking to expand and make a profit. All of these other considerations throw cold water on the theoretical argument that state taxation alone will have a large impact on economic growth.

This is why it’s very important to move from theoretical assumptions governing the behavior of state business growth and taxes and to focus on the empirical studies that have looked into the impact of state taxes on economic growth.

So, if anyone ever tells you that there’s a consensus among economists or that “economic theory predicts” that lower state personal income taxes boost economic growth, all you have to do is look at the recent empirical academic evidence and the real-world examples that are unfolding badly across the country.

While not all income tax cuts are created equal (more on that soon), states that have cut income taxes (mostly for the wealthy) across the country did not do so in a revenue neutral way. Instead, the tax cuts had the predictable consequence of creating large budget gaps that were met by smaller investments in education, higher education, and other important public goods that are vital to support private sector growth (sound familiar?).

In fiscal year 2016, West Virginia is expected to collect about $1.9 billion in personal income taxes. To put that in perspective, the personal income tax alone could nearly pay for our state’s public education costs and it brings in nearly twice what the state pays in Medicaid costs. Because West Virginia must balance its budget, personal income tax cuts that fail to produce the promised economic gains almost certainly will lead to deep funding cuts for schools and other public services. This would not only hold our economy back and exacerbate income inequality, but it would make West Virginia an unattractive place to live, work, and raise a family.

Rather than bet our future on a strategy that has failed to deliver in other states, we need to be making smarter public investments that support the private sector and create an environmental for all to succeed.

*Using the IRS 2012 figure of business taxes deducted of $569 billion drops this share to 2 percent.It is also important to recognize that the IRS figure includes federal taxes, not just state and local taxes.  This number also does not consider that state and local taxes can also be deducted from federal income taxes paid, which would lower the effective state tax rate. For more on this methodology, please see footnote 5 ( http://www.cbpp.org/research/vast-majority-of-large-new-mexico-corporations-are-already-subject-to-combined-reporting-in)