Gutting the Personal Income is a Poor Strategy (Part I)

Last week, the newly created Joint Select Committee on Tax Reform held its second meeting to discuss overhauling the state’s tax system. While the meeting included an overview of the state’s current tax system and historical tax reform efforts of the past (e.g. Cecil Underwood’s Commission on Fair Taxation), committee members made it quite clear in April that they want to explore abolishing the state’s personal income tax, even though they now say “there’s no hidden agenda” and/or proposals they have in mind for 2016.

It is important to remember that during the 2015 Legislative Session several members of the uber-conservative  “Liberty Caucus” introduced a bill to abolish the personal income tax. The movement to abolish or rollback the personal income tax is not something unique to West Virginia. In fact, it is part of a well-organized conservative effort across the country that is being spearheaded by wealthy groups such as ALEC, the Heritage Foundation, and economists Stephen Moore and Arthur Laffer. So far, five states – Kansas, Maine, North Carolina, Ohio, and Wisconsin – have made major cuts to their personal income taxes on the advice of these groups and many more states have considered doing the same. As I pointed out in a recent op-ed in the Charleston Daily Mail, gutting the personal income tax is a poor strategy that would likely lead to growing budget deficits instead of a growing economy.

West Virginia’s personal income tax  was established in 1961 and applies to most types of money income, including wages and salaries, interest, rental income, capital gains, and some business and pension income. West Virginia is one of 43 states that has a personal income tax and like 29 other states, it links to the federal definition of adjusted gross income (AGI) to define its tax base. West Virginia, like many states, also has a number of deductions, exemptions, and credits that lower the income subject to the tax. According to the latest Tax Expenditure Report from the WV State Tax Department, the state lost an estimated $242 million in forgone revenue from these expenditures in 2014. 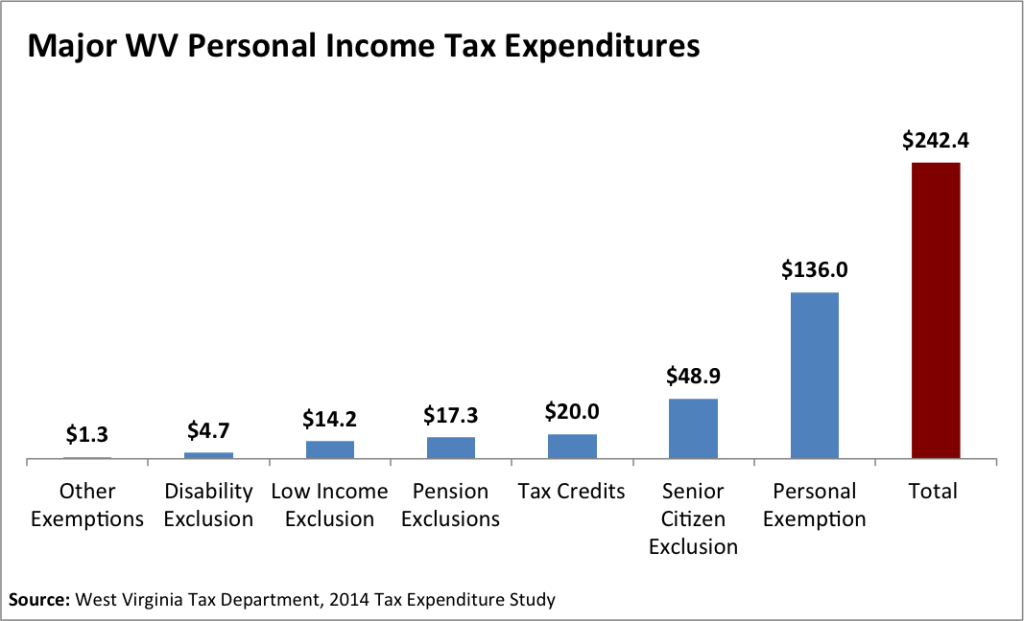 Similar to 33 states, West Virginia also has a progressive or graduated rate structure, with the income tax rates growing with income (see table below). This means that unlike the sales tax that hits low-income families the hardest, higher income residents pay a larger of their income in personal income taxes compared to low- and middle-income residents. The personal income tax also reduces the overall regressive nature of West Virginia’s state and local tax system. 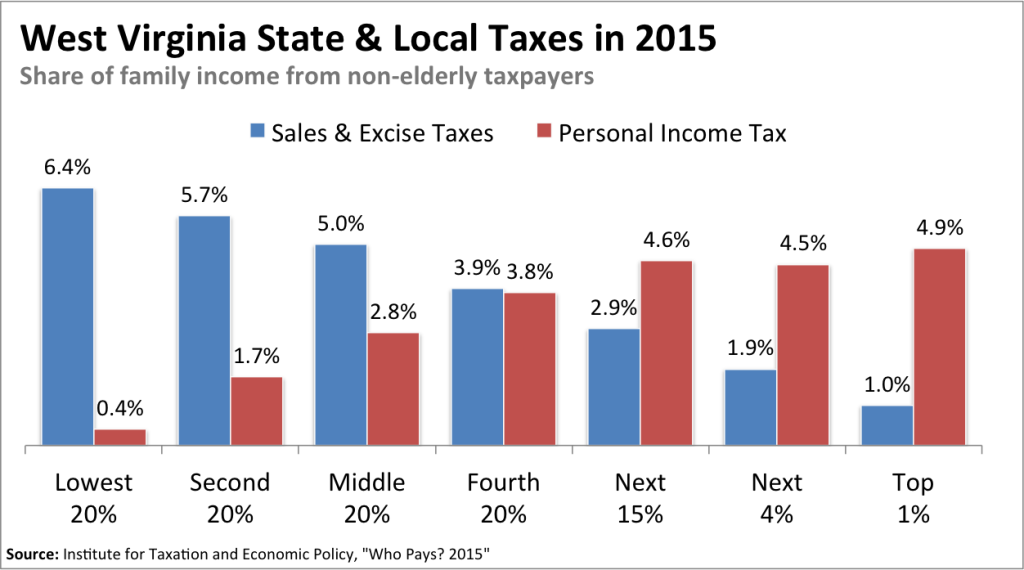 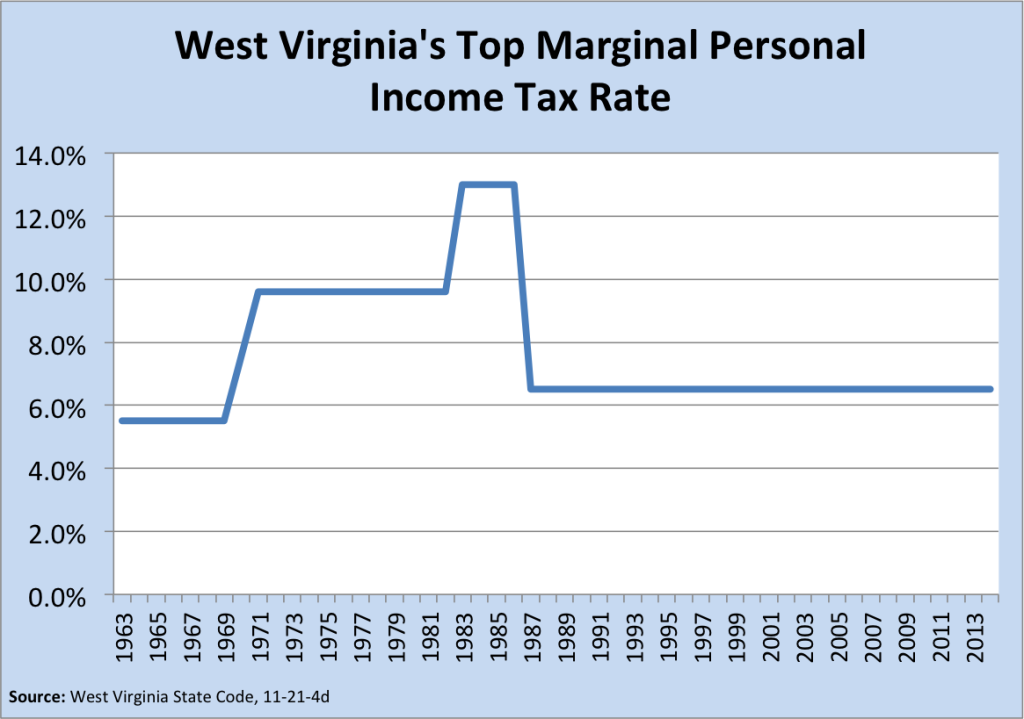 Since West Virginia’s marginal tax rates and income brackets have remained unchanged since the 1987, this means a lot more people are climbing into the higher income tax brackets. For example, in 1987 only four percent of families in the state had income (not to be confused with taxable income) above $60,000, compared to almost 40 percent in 2014. 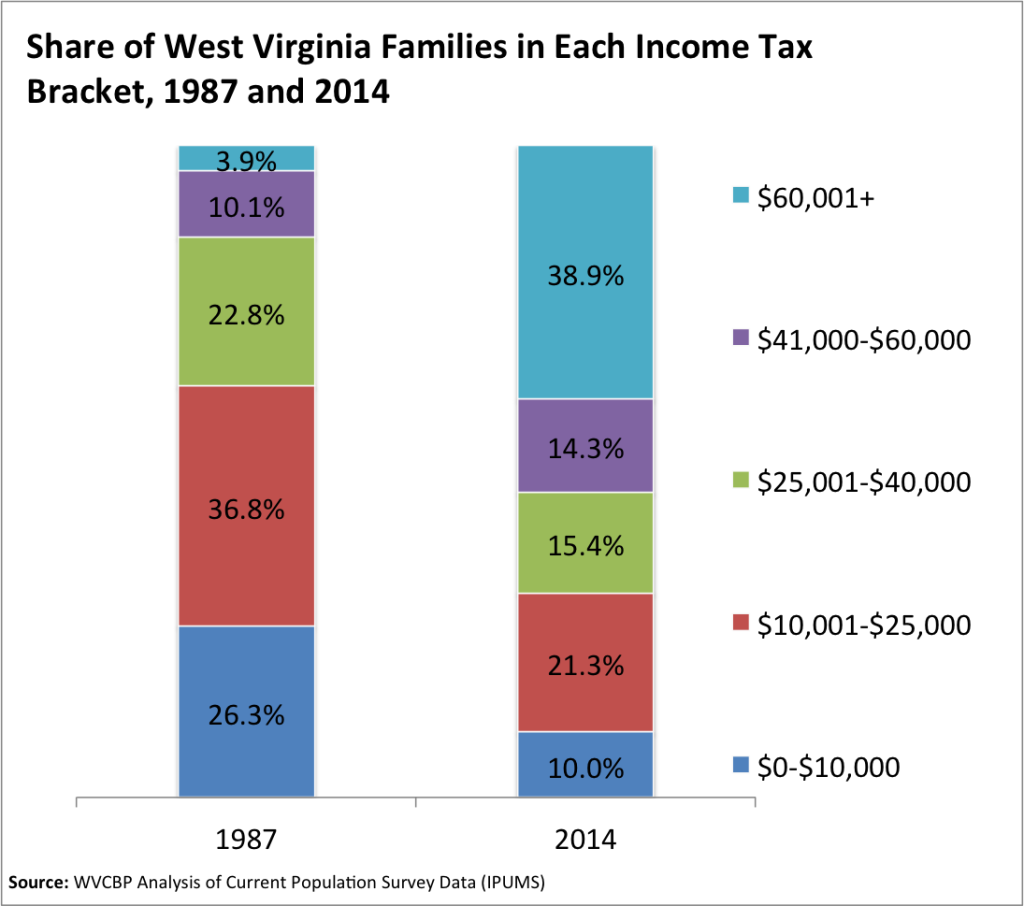 While the state’s top marginal rate is 6.5 percent (see table below), no one pays 6.5 percent of their taxable income in state income taxes. This is because they are only paying the higher rate on any income above each threshold, not on everything.

Now that we have a good understanding of how the state’s personal income tax works, let’s look at what it pays for in West Virginia.The personal income tax is West Virginia’s second largest source of revenue outside of federal funds. It makes up 43 percent or $1.9 billion of the state’s $4.3 billion General Revenue Fund budget that funds public education, public safety, higher education, health and human services and many other important programs and services. 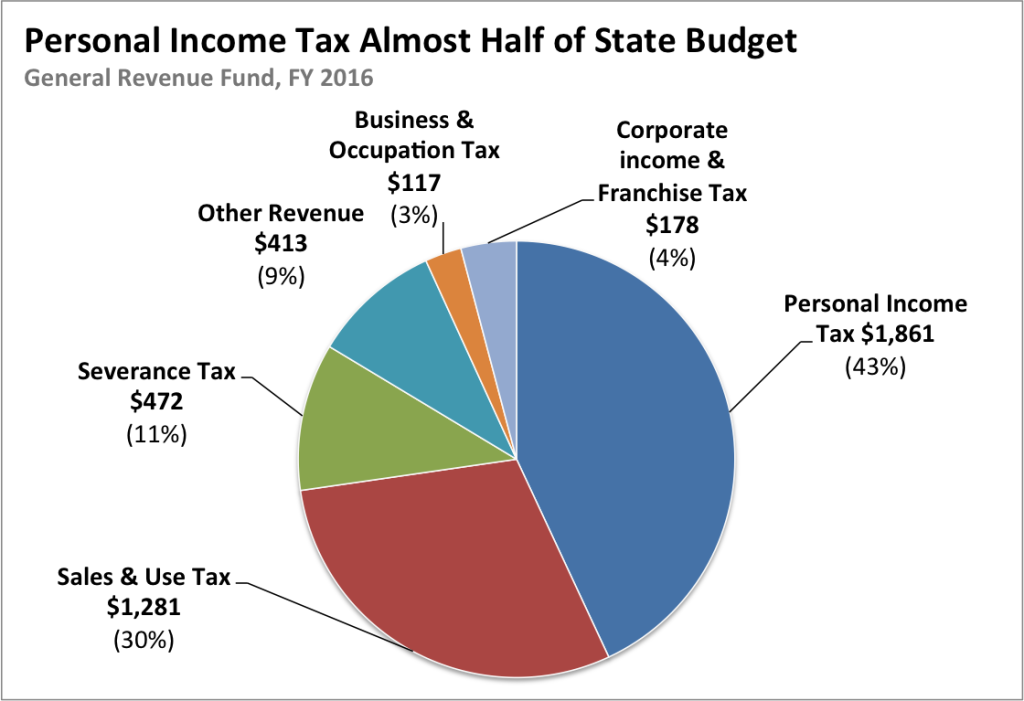 About $95.4 million in personal income tax revenue pays for the Old Workers’ Compensation Debt (which will be fully paid off by 2016) and a couple of years ago the legislature decided to dedicate $35 million of the $90 million to fund the liability in retiree health care (a.k.a. OPEB). The personal income tax is also a growing share of the budget, growing from 35 percent in 2002 to a projected 44 percent by 2020. 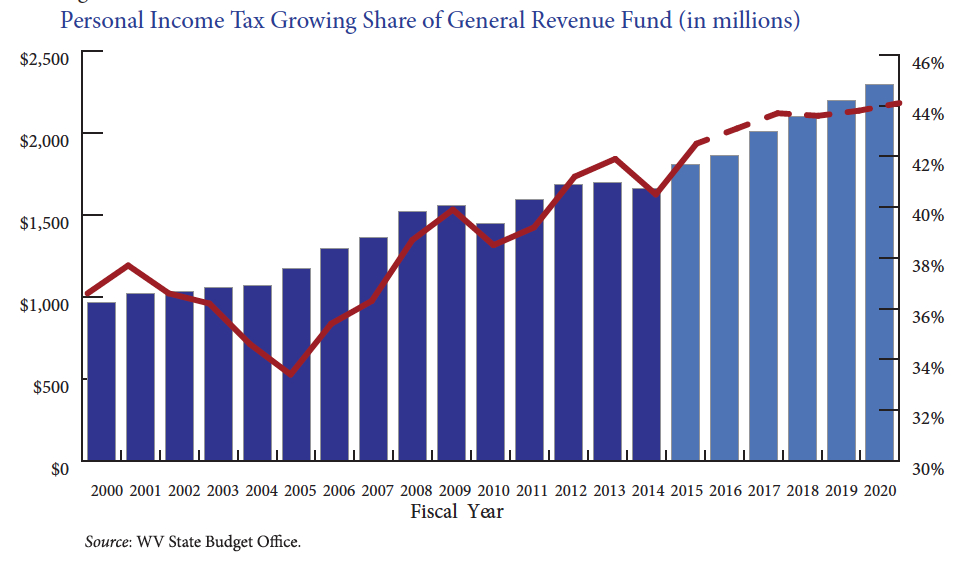