Governor Justice is touting recently released state unemployment figures to conclude that West Virginia has the “best job rate in 11 years” and “record-setting job growth”. A clear understanding of the data tells a very different story, where West Virginia’s economy is performing worse than the rest of the country since he took office and especially over the last decade.

West Virginia’s seasonally-adjusted unemployment rate was 4.9% in April 2019, tying Mississippi for the 4th highest rate in the country. The governor uses the “non-seasonally adjusted” unemployment rate of 4.2% to make his case, which should not be used to make monthly comparisons and it fails to consider seasonal considerations (e.g. construction slows down in the winter) and other events. That’s why Workforce West Virginia used the 4.9% seasonally adjusted figure in their May press release on the state’s employment figures, not the 4.2%. Pushing this to the side, it is also not a good practice to look at a single month of data for any conclusions, especially the latest month since it is a “preliminary” figure that could be revised. It is also important to keep in mind that this household survey (CPS) is also based on a small sample size in West Virginia that can be very volatile and is subject to revision and annual bench-marking.

The unemployment rate is not a “job rate” like this governor says,  but a jobless rate with a lot of caveats. The unemployment rate measures the share of the state’s civilian labor force (non-institutionalized population 16 and older) who are actively seeking work over the last four weeks that don’t have a job. It does not include those who would like to be employed but gave up looking for work a couple of months ago. If you include discouraged workers – a broader measure of unemployment called U-6 that is used by Bureau of Labor Statistics – the unemployment rate in West Virginia is 9.8%, which is higher than all but Alaska (1st Quarter 2019).

While the number of West Virginians “employed” (this includes those working multiple jobs, working part-time or working out-of-state) has been growing since 2015 (see graph below), the state has a long way to go before returning to where it was in the early part of 2008. According to household survey, employment in West Virginia peaked in April of 2008 at 779,653.  Fast forward 11 years later, the number of employed people in West Virginia has dropped to 751,000 in April of 2019, a reduction of 28,653. This is also reflective of the state’s declining and aging labor force and population loss over this period. 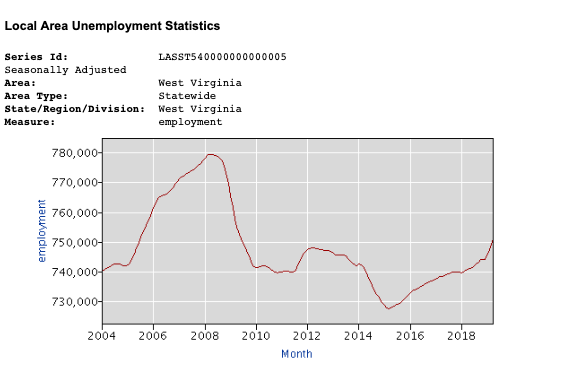 To look at job growth in West Virginia, you have to look at the establishment survey (CES) of businesses and government agencies that looks at payroll employment. The establishment survey is also a much larger survey (142,000 surveyed compared to 60,000 in CPS) and is much better barometer for looking at job growth. (However, the Quarterly Census of Wages and Employment is the most precise, but it usually lags behind by about six months).

Looking over the last 11 years, it is obvious that West Virginia has performed poorly economically. The state’s job growth has been abysmal. Total job growth from December 2007 – the beginning of the national Great Recession – to April 2019 was less than 1 percent and the state has shed over 25,000 people from its labor force over this time. Since December 2007, West Virginia’s unemployment has increased from 4.6% to 4.9%. This means that our low unemployment rate is understating the true level of joblessness in West Virginia. If our labor force was at the same level it was in April 2008 (814,100), than our unemployment rate would be 7.8% instead of 4.9%.

If we look at the employment data since Justice took office in February 2017 (see graph below), West Virginia is not doing much better than most states and almost all of West Virginia’s job growth is tied by up in pipeline construction that was scheduled long before Justice took office. While West Virginia has gained 20,700 jobs since January 2017 – which is a 2.9% increase, ranking WV 18th best – this was largely driven by the 18,200 jobs gained in construction over this period. Most industries saw very little job gains. Labor force growth was just 1.4% or about 10,500 over this period, ranking West Virginia below most states (31st). Since January 2017, the state’s unemployment has dropped only by 0.4 percentage points from 5.3% to 4.9%, which was a a smaller decrease than all but 10 states. 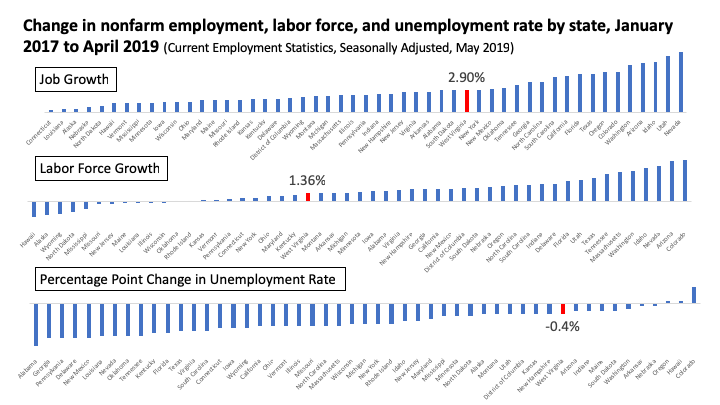 While it is clear that West Virginia’s economy is improving, it is not setting any records and almost all of the job growth is tied up in pipeline construction, which are temporary jobs with a large share of out-of-state workers who will leave once the construction is complete. And while the state’s unemployment rate is lower than it has been in a decade, it is higher than the national unemployment (3.6%) and all of our neighboring states. And the main reason it is low is because the state’e workforce has shrunk considerably over the last decade.