As we have noted before, West Virginia has weathered the recession better than most states. The state is one of only eight  that did not project a budget shortfall for FY2012.  In fact, we ended this year with an astonishing surplus of $330 million (although this has more to do with setting overly pessimistic revenue estimates, but that’s another story, for another time). And although our unemployment rate has doubled since the beginning of the recession, we have lost a smaller percentage of our job base, 1.5% compared to the U.S. average of 4.3%, and our real GDP has grown by 4 percent from 2009 to 2010.

While many are quick to attribute this economic vitality to our mining (including the Marcellus Shale ‘play’) and rebounding manufacturing sectors, this is not where the state has seen the most income growth over the last couple of years. In fact, the biggest sources of income growth derive from federal government outlays 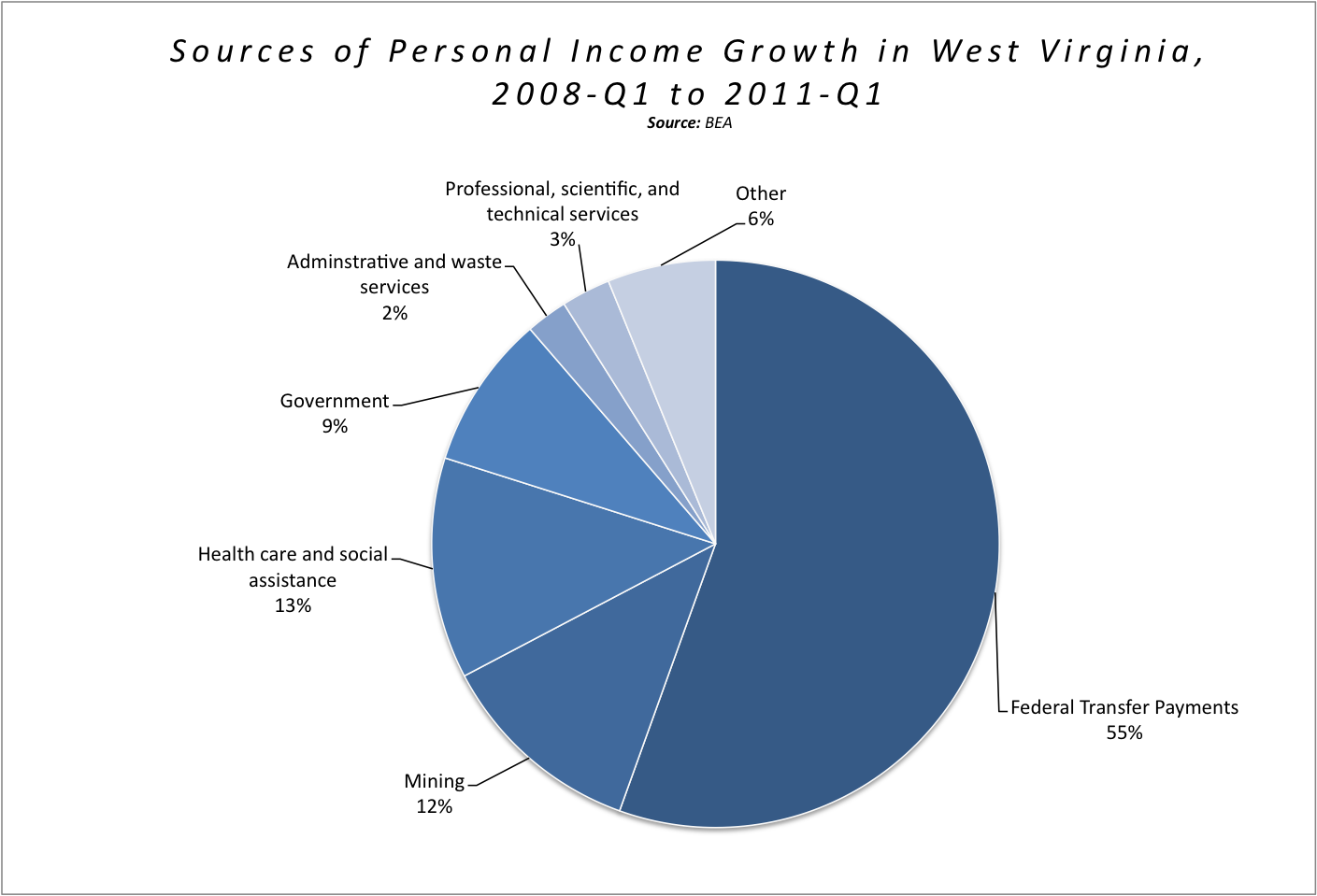 From the 1st quarter of 2008 – roughly when the national recession started – to the 1st quarter of this year, personal income has increased by $6.1 billion (not adjusted for inflation). Of that $6.1 billion, approximately 55 perent or $3.4 billion was in the form of federal transfer payments – which includes Social Security, Unemployment Insurance, Medicare, Medicaid, and other federal payments. On top of these federal transfers, earnings from government jobs increased by 9 percent or $544 million over this period. This means government has been responsible for almost two-thirds of all income growth since the recession started.

Mining sector earnings- which includes coal mining, natural gas extraction, and support industries – increased by 12 percent or by $732 million from 2008 to 2011. The health care sector, which is the largest employer in the state, saw earnings increase by 13% or $782 million. As we showed in the March and April Jobs Count, the mining sector and the health care services sector are the fastest growing industries in the state over the last three years.

While these two industries have definitively been an important piece of the state’s economic recovery, their importance is dwarfed by the role of government expenditures (mostly all federal) in fueling economic recovery.

As the U.S. Bureau of Economic Analysis (BEA) pointed out a couple of weeks ago, almost one third of (30%) federal transfer payments over this period was due to the federal stimulus (ARRA) passed in March of 2009. Pushing aside the high fiscal policy multipliers of federal transfers, the federal stimulus is responsible for about 17% or $1 billion of all personal income growth since the recession started in 2008.

Given the large and important role the federal government played in helping the state weather the recession, you would think ideas like this one and this one would be off the table – but they’re not.

While it is often hard for someto admit that fiscal policy (i.e. Keynesian/demand-side economics) played a large role in our country’s economic recovery,  the number clearly show that it did.