Another day, another business climate ranking with a poor result for West Virginia, this time coming from the Forbes 2012 Best States for Business list, which ranks West Virginia as the 45th best state for business. Forbes first started ranking the states in 2006, so like I did earlier this week with the Economic Freedom Index, I compared the states’ rankings in 2006 with their subsequent job growth. And, like the Economic Freedom Index, the Forbes Best States for Business ranking is a pretty poor predictor of job growth.

Overall, the state rankings in 2006 had a very weak correlation with employment growth over the next five years. While Forbes’s correlation of -0.18 was better than the Economic Freedom Index’s correlation of -0.06, it still suggests that there is little to no relationship between a state’s ranking and job growth.

The Forbes rankings are a measure of six categories: business costs, labor supply, regulatory environment, current economic climate, growth prospects, and quality of life. I’ll go through each one, and compare the state rankings in each to jobs growth, to see if any of the measures is a decent predictor of job growth. 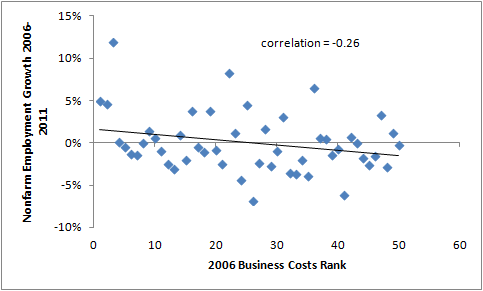 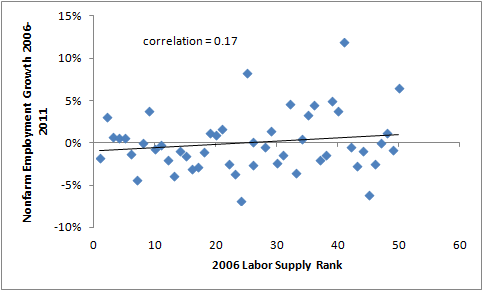 In the interest of time and space, I’ll tackle the next few categories altogether, and skip the charts. The quality of life, regulatory climate, and economic climate indexes all had very weak correlations with job growth. The quality of life measure, which accounted for poverty rates, crime rate, school performance, health and culture and recreational opportunities had a correlation 0f -0.13. The regulatory climate index, which measured “freedom” or the level or existence of labor regulations, health-insurance coverage mandates, occupational licensing, the tort system, and right-to-work laws had a correlation of -0.11. And the economic climate index measured the states’ economic performance of the past five years, and had a correlation of -0.09, suggesting that past performance is not a guarantee of future results. 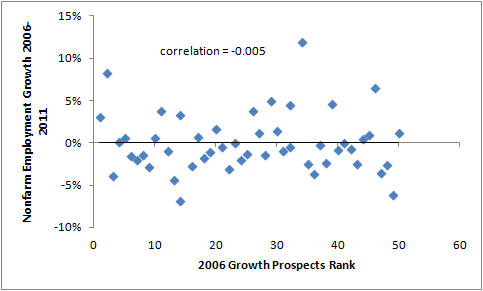 So what does this all tell us? Plenty that we already know. The cost of doing business is a factor in state job growth, but taxes are only a small part of that cost. Quality of life matters just as much as regulatory burden, and neither one matters all that much. And its hard to predict where job growth will happen.  Odds are a ranking on some index isn’t going to tell you. Overreacting to our rankings in these indexes, and trying to conform our policies to what they describe as “best,” isn’t going to have the outcome some might hope for.