This week, the House of Delegates will consider a bill (HB 2704) that will extend the state’s sales and use tax to more services  in conjunction with lowering the sales tax rate.  HB 2704 would remove several services currently exempted in West Virginia’s sales tax, including services provided by lawyers, accountants, architects, engineers, investment counselors, contractors, and veterinarians. The bill would also apply the sales and use tax to purchases of mobile homes, advertising, digital downloads, computer software, private fitness club memberships, and electronic data processing.

The bill would also reduce the sales and use tax from 6 percent to 5.5 percent, while lowering the sales tax rate even further in outer years if certain triggers are met with the balance in both Rainy Day Funds (A and B). The sales and use tax rate would drop to 5.25 in 2018, 5 percent in 2019, and 4.75 percent in 2020 if the Rainy Day Fund is above 15 percent of the General Revenue Fund. Currently, the Rainy Day Fund has a balance of about 20 percent of the General Revenue Fund (notwithstanding the $51.8 million recently appropriated for FY 2016, which would drop this down to 18.5%).

The only states in the country that tax some professional services are Hawaii, New Mexico, Delaware, North Dakota and Washington State and each of them do so in a myriad of ways.

According to the most recent Tax Expenditure Report (2016), these tax exemptions amount to about $365 million in forgone revenue in 2016. Since veterinarian services are not itemized in this report, an estimated revenue impact (based on the 2012 Economic Census) would be approximately $8 million based on total receipts of $135 million in 2012. As the Figure below illustrates, this brings the total to approximately $373 million.

Total sales and use tax revenue for FY 2017 is projected to be $1.379 billion. Included in that figure is $60 million from Governor Tomblin’s proposed tax on telecommunication services, which is not included in HB 2704, and will most likely not be passed by the legislature this year.

Dropping the proposed telecommunications tax and reducing the sales tax rate from 6 percent to 5.5 percent would reduce FY 2017 sales tax revenue by an estimated total of $169.9 million. With the sales tax lowered to 5.5 percent, eliminating those exemptions would increase revenue by $341.9 million (grey bar above) under the assumption their would be no change in behavior (static instead of dynamic score)

All told, cutting the sales tax rate to 5.5 percent, eliminating the exemptions in HB 2704, and canceling the planned telecommunications tax would increase net sales tax revenue by $56 million for FY 2017 since these changes do not take place until the second half of FY 2017. This is about the same amount of revenue that the Governor estimated from his proposal to apply the sales tax on telecommunications for FY 2017.

Now that we have a ballpark idea of how this bill will impact the budget, it is important to determine whether this is sound policy. One of the most troubling aspects of the bill is that it contains triggered reductions in the sales tax rate based on the size of the Rainy Day Fund, which usually only receives deposits from surplus revenue at the end of each fiscal year. Instead of tying the sales tax rate reductions to the Rainy Day Fund, it would be much more prudent to tie them to revenue benchmarks or not include them at all. As we experienced with the reductions in the business tax cuts that were triggered in the same way, we could see cuts in programs and services at the same time that we are building our Rainy Day Fund.

Is it Good for Working Families?

It is hard to tell. At one level, having a broad sales tax base with a lower rate is sound tax policy, leading to less revenue volatility. It is what tax nerds like myself call horizontal equity. or the principle that people in similar circumstances with the same ability to pay should pay equally. Moreover, the inclusion of professional services also makes the sales tax more progressive. As deputy editor of Tax Analysts David Brunori notes in this Forbes article:

The sales tax should fall on all final consumption — preferably at a very low rate. So everything we buy should be subject to tax. There are several reasons for this. First, there is no economic or tax policy reason to tax the purchase of a toaster oven but exempt the purchase of a haircut or accounting service. They’re both consumption. Second, exempting services narrows the base and results in higher taxes on everything else. Third, exempting services creates a government-led incentive to spend money on services over things that are taxable. But the tax laws shouldn’t be used to mess with markets in that manner. Fourth, taxing services would make the system less regressive; rich people buy more services than poor people. Finally, the exemption in a service-dominated economy is very expensive.

While expanding the sales tax to more services is in line with promoting horizontal equity, how does it impact vertical equity or the principle that people with the greater ability to pay should pay more? While West Virginia does not use tax incidence modeling, other states do that may be able to provide some insight. For example, according to a recent report from the Texas Comptroller on tax exemptions and tax incidence,  sales and use taxes on several professional services are more progressive than most sales taxes and more of the revenue is generated out of state. 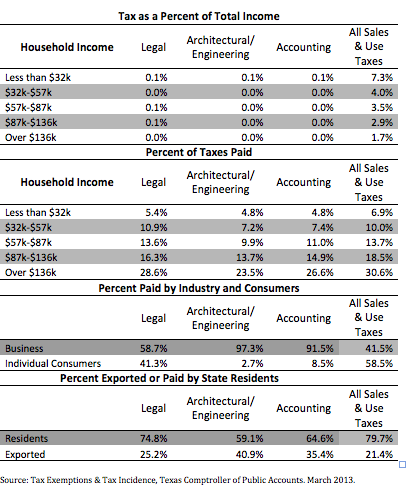 For example, the sales tax on legal services is mostly flat  – averaging about 0.1 percent of household income across the income distribution compared to the state’s overall sales and use tax that falls relatively harder on low income households. Another important aspect is the exportation of taxes, which is a big factor in West Virginia since the state has a very large exportable tax and industry base.

While the above analysis only included some of the services included in HB 2704, many of the others would follow a similar pattern in terms of tax incidence – such as internet purchases (digital downloads), private gym memberships, investment counseling, advertising, and computer software – while others like taxing mobile homes may fall much harder on low-income households.

It is also important to consider how lowering the sales tax rate would impact low and moderate income families. Would this reduction, along with the broadening of the sales tax base to include more services, increase or decrease the share of income low and middle income families pay toward sales taxes? At this point it is hard to say, but my guess is that it would slightly lower the effective tax rates on these families. It also depends on how these changes will impact important services and programs that these families receive in the state.

Another important factor to consider is how it will alter business behavior. Will adding professional services provide incentives for more vertical integration, which will could put small businesses at more of a disadvantage, and how will West Virginia administrate sales that take place in other states? How will taxing business-to-business sales of services effect state competitiveness or potentially harmful tax “pyramiding” that occurs from taxing business inputs? These are all important considerations, among others.

In the final analysis, having a broader sales tax base is sound policy insofar that is doesn’t hurt state investments or low and moderate income families. This is especially true if the expanded base of the sales tax includes services that are predominately purchased by more affluent households. At the same time, when adopting sales tax increases it is also important to keep in mind the fairness of West Virginia’s state and local tax system. Currently, low and middle families in West Virginians pay a higher share of their income in taxes than wealthier families.

If the legislature is intent on expanding the sales tax to more services and are worried about the impact it might have on low and middle families, than they should consider including a refundable state Earned Income Tax Credit (EITC). A state EITC would not only improve tax fairness, but it could also boost the state’s labor force, reduce poverty, and have a positive on impact on social and economic outcomes in the future.