Blog Posts > Exaggerating the Employment Impacts of Shale Drilling: How and Why
November 21, 2013

Exaggerating the Employment Impacts of Shale Drilling: How and Why 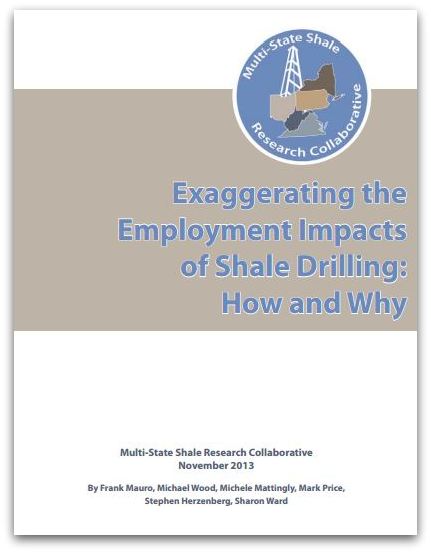 Over the last five years, firms with an economic interest in the expansion of drilling in the Marcellus and Utica shale formations — and their allies, supporters, and trade associations — have used a variety of tools and techniques to exaggerate the employment impacts of shale drilling. These strategies have ranged from the use of inappropriate measures, such as data on new hires, to represent job growth to the misleading attribution of all jobs in “ancillary” industries to the shale industry. Read the full report.

A review of statements by representatives of shale drilling firms and their allies makes the motivation for this exaggeration clear — to preclude, or at least to minimize, taxation, regulation, and even careful examination of shale drilling.

An explicit example of this “defense by exaggeration” strategy occurred on July 19, 2012, at a Harrisburg press conference during which the Pennsylvania Chamber of Business and Industry joined the U.S. Chamber of Commerce for the launch of its “Shale Works for US” campaign.

An accurate assessment of the short- and long-term impacts of shale development is necessary to adequately prepare drilling communities for the emergence of the industry, to estimate negative externalities associated with this industry (such as road damage, water treatment, and habitat loss), and to recover the costs of these externalities.

That accurate assessment must include defensible estimates of the number of jobs created in the industry, the wages associated with those jobs, the distribution of those jobs between in-state and out-of-state workers, and the relationship to total state employment. To answer those questions, the Multi-State Shale Research Collaborative has examined employment in the Marcellus and Utica Shale in six states: Maryland, New York, Ohio, Pennsylvania, Virginia, and West Virginia. Our findings include: