Do You Pay More Taxes Than Coal?

The New York Times and the Economist both had interesting pieces last week highlighting the difficulties of federal corporate tax reform. Most interesting, however, was a chart in each article showing the effective federal corporate income tax rate by industry.  Unfortunately (or fortunately), the chart contained a major error. The effective rates in the chart are not just for the “federal” corporate income tax, but for federal, state and local taxes paid by companies.

The chart was compiled using data from about 6,000 (not 7,000) publicly traded companies by Aswath Damodaran, a Professor of Finance at the Stern School of Business at New York University. The data show that the total effective corporate tax rate is 15.3% for all companies, and 29% for companies that made a profit. It is important to keep in mind that the the top federal corporate tax rate is 35%. The effective rate was found by dividing the taxes paid by the taxable income as reported to the stockholders.

There are several reasons why companies pay so little, but one is that our federal and state corporate tax code is riddled with tax preferences and tax subsidies – what some are beginning to call “tax earmarks.”  And these tax expenditures have a lot of powerful friends. This means efforts to reform the corporate tax code – reduce the rate and close loopholes – will benefit some companies while hurting others. 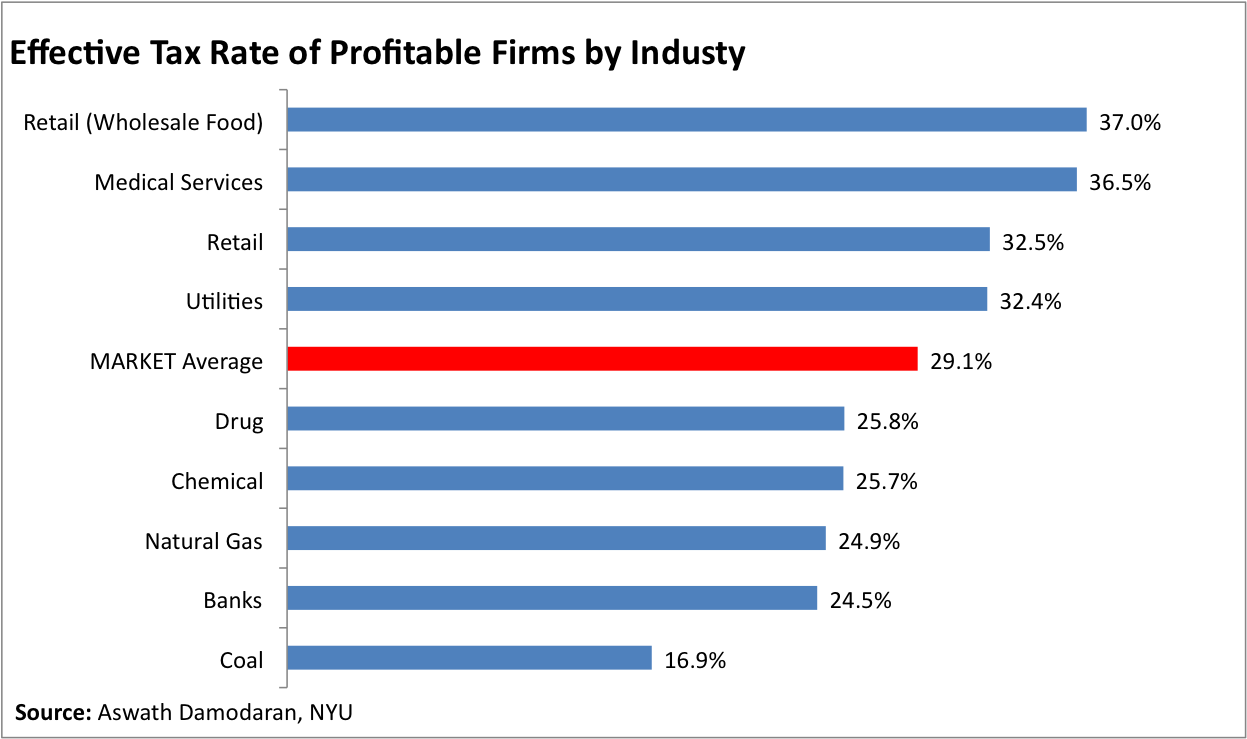 The chart above displays effective tax rates for select industries. According to WorkForce West Virginia, these industries are some of West Virginia’s largest employers, such as Kroger, WV United Health, AEP, Consolidated Coal, Chesapeake Energy, Mylan, Dupont, and Wal-Mart.

As you can see, profitable coal companies (20 out of 25 were profitable: see here) have a smaller effective tax rate than any of the other dominant industries in West Virginia. In fact, of the 100 industries examined by Damodaran, the coal industry had the 7th lowest effective rate. The natural gas industry, which has been getting a lot of attention lately, also had a below average effective rate.

While some have argued that the state already taxes coal too much, it appears the industry doesn’t pay nearly as much as other companies or as much as most households

According to a 2008 Congressional Budget Office (CBO) report, the total household effective “federal” tax rate in 2005 was 20.5%. (Here are the effective taxes rates by category:  individual income tax 9.0%, social insurance (Medicare, Social Security) was 7.6%, corporate income 3.1%, and excise was 0.8%.)

The Institute on Taxation and Economic Policy (ITEP) finds that state and local taxes are about 9 percent of a household’s income.

While you and I may be paying close to 25-30 percent of our income in taxes, the coal industry is paying far less. It is time to for them to pay their fair share and help chart a course to the future.