West Virginia Public Broadcasting – Data released Thursday by the U. S. Census Bureau shows the percentage of West Virginians living in poverty stayed consistent last year, but the number of children living below the poverty line has grown. Listen 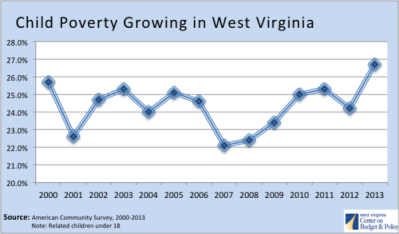 According to the 2013 American Community Survey, one in three children in West Virginia under the age of 5 lived in poverty in 2013.

“That’s something that should really conjure up action from our state legislators and other people in the community,” said Ted Boettner, executive director of the West Virginia Center on Budget and Policy.