The federal government released data today showing the cost of procedures at hospitals in all 50 states that are paid by Medicare. See news stories here and here.  As this Wonkblog graph highlights, the good news is that providers in West Virginia tend to charge less than most states on a number of inpatient procedures. 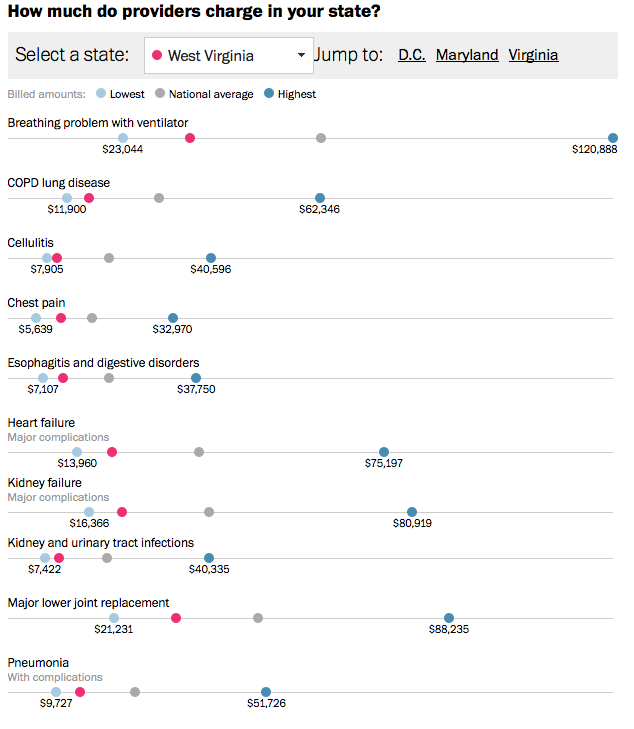 However, a closer look at the data reveals large disparities in the state. For example, if you are going to have a permanent pacemaker implant installed in your chest, prices vary dramatically. The average cost is $20,834 at Wheeling Hospital compared to $57,731 at Saint Mary’s Medical Center in Huntington.

The average bill for a patient on a ventilator also varied enormously around the state. For patients with ventilator support for more than 96 hours, the average cost at Logan Regional Medical Center was six- and-a-half times greater than at the Beckley Area Hospital ($120,838 compared to $17,877).

While none of these costs takes into account the quality of the services provided or the outcomes, the large disparities in costs should give us pause in West Virginia. It should also tell us that shoving people out of Medicaid isn’t going to do much to reduce costs in our health care system. To do that, our government needs to be a better negotiator of health care services, especially prescription drugs. As my friend Dean Baker often says (with strong evidence), if we had the per capita health care costs of Canada or any other advanced industrial country, we would be running budget surpluses instead of deficits. At the very least, these numbers should help us understand why reducing health care costs is so important for our state and for ensuring our future.