Yesterday,  Governor Tomblin announced that the business franchise tax will be fully eliminated beginning tomorrow (Jan 1). While the governor says the elimination of the business franchise tax and the reduction in the corporate net income tax has helped to “secure additional investments” and that the state has benefited from these changes, there is no evidence that it has improved economic growth or the quality of life in West Virginia. However, there is strong evidence that it has led to significant cuts to important public programs and services like higher education over the years.

In FY 2014, the state collected an estimated $204 million from the business franchise and corporate income tax. This was $18 million less than it collected 24 years ago in 1990. Meanwhile, these two taxes have gone from about 13 percent of the general revenue budget to just under 5 percent. According to the State Budget Office, this pattern will continue over the coming years with business tax revenue declining further to about 4 percent of the state budget. 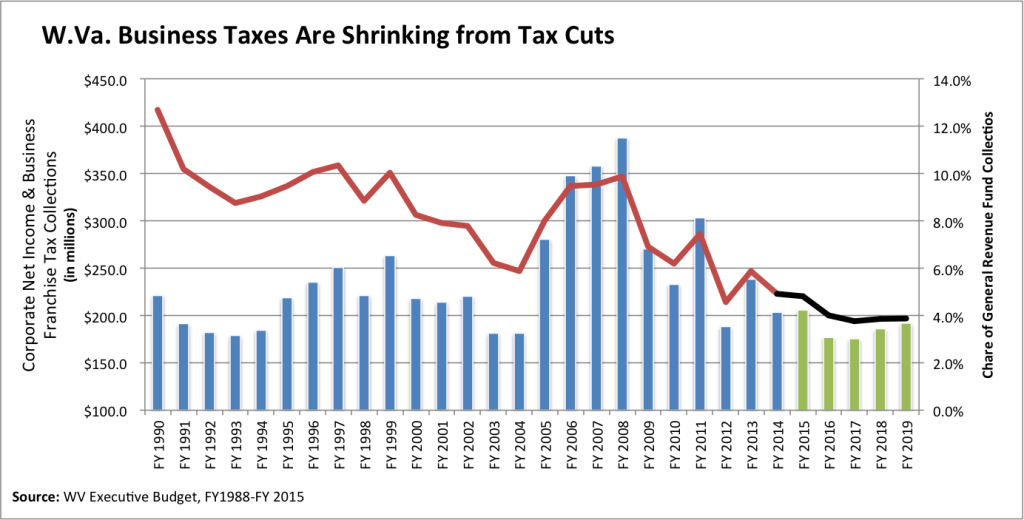 While it is difficult to say with certainty how much revenue the state has lost over the years from these two tax cuts, one way is to look at these taxes as share of private-sector state GDP (Gross Domestic Product). From 1997 to 2006 (before the tax cuts where put in place), West Virginia collected on average 0.62 percent of private-sector GDP in business franchise and corporate net income taxes. In 2013, this number was just 0.38 percent. If we applied the 0.62 percent between the years 2009 and 2013, the state would have collected an additional $542 million over the five-year period. The State Department of Revenue has estimated that total lost revenue from these two taxes and some smaller ones was $205 million in 2015.

While proponents of cutting these corporate taxes proclaimed that they would pay for themselves and not lead to any budget cuts, this hasn’t been the case. As we documented earlier this year, the state has made drastic cuts to higher education and other important programs over the years because of large budget gaps.

There is also little evidence that they have spurred additional economic growth or created jobs. As Sean pointed out a couple of weeks ago, West Virginia has had slower job growth than its neighboring states and has a higher unemployment rate. The impact of the tax cuts has also been masked by the recent boom in shale gas development that has little or nothing to do with lower business taxes. (For a solid analysis of the academic literature on state corporate tax cuts and jobs see here.)

Instead of inefficient corporate tax cuts that have largely flown out of state to wealth stockholders, West Virginia could have made smart investments in early childhood education, infrastructure, workforce training, higher education, and in other areas that would have improved the well-being and health of our children and provided a much better foundation for stronger economic growth.