Two weeks ago, the House Industry and Labor committee passed out HB 4104 that would make it easier for employers to classify workers as independent contractors when it comes to Unemployment Insurance and Workers Compensation eligibility. A similar bill passed the House last year, but died in the Senate.

Under HB 4104, the state would replace the ABC test and adopt what is called the “common law” or “IRS test” that contains a 20-factor test that makes it easier for businesses to defend workers as independent contractors. This 20-factor “right-to-control” test centers on how much the employer controls how the workers work is performed by looking at various categories, including the level on instruction, if training is required, schedule flexibility, whether the worker works for multiple companies, to name a few. The issue of who has the right to control is often not clear and the IRS does not define “employee”. Since no single factor is decisive in determining the classification of the worker, the employer must weigh all of the factors to make a determination.

The IRS test differs from the “economic reality test” that the U.S. Department of Labor uses to determine benefits (federal minimum wage, overtime pay, ect.) under the Fair Labor Standards Act (FLSA). This test uses seven factors to determine whether the employee is economically dependent on the employer. 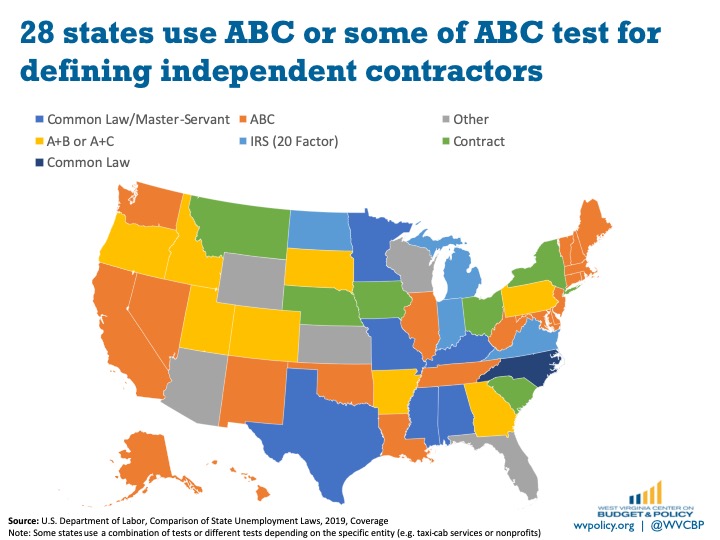 As the National Employment Law Project has argued, since the ABC test makes “a presumption of employment for any personal services contract that is only rebutted when all three of its subtests are found inapplicable” the ABC test  “is more difficult to manipulate than the common law test.” Because the IRS test or the sole use of “common law” would likely lead to more workers being classified as independent contractors this could further erode protections for workers by taking away unemployment and workers’ compensation benefits when they find themselves out of work. Furthermore, many workers that become independent contractors may not fully realize the tax consequences of having to pay 100% of FICA taxes (Social Security/Medicare), health insurance coverage, liability insurance and other expenses related to being an independent contractor.

Another consequence of increasing the number of independent contractors (self-employed) is that it could reduce the UI tax collections and thus reduce the balance of the state’s unemployment trust fund. At the same time, this could increase assessments of unemployment contributions from employers who cover their workers. According to the USDOL, West Virginia’s UI solvency level (Avg. High Cost Multiple) at the end of 2018 was the 10th lowest in the nation – although West Virginia’s UI Trust Fund balance has grown by about $45 million since this time.

Employee misclassification has large costs and consequences. It can rob individual workers of their rights and benefits, it can create unfair market competition, it shifts costs from employers to workers, and it can reduce tax federal and state tax revenues. While some misclassification occurs in good faith, a large amount of it is deliberate as employers intentionally misclassify employees to avoid paying FICA taxes, workers’ compensation premiums, and unemployment insurance premiums, and stop efforts toward unionization. For example, at the end of 2018, 201 random audits in West Virginia revealed 242 misclassified workers.  Research suggests that between 10 to 30% of employers misclassify workers as independent contracts, costing state and federal governments billions in lost revenue.

Instead of making it easier to misclassify independent contractors as employees by taking away the presumption of an employer-employee relationship with a 20-factor test, West Virginia lawmakers should be taking more step to crack down on employer misclassification.