Congresswomen Capito argued in the Gazette on “Labor Day”  (of all days…) to renew Bush’s tax cuts for the wealthy. In the op-ed, Capito resorted to presenting voters with a “false choice” about the Bush tax cuts and by presenting the facts in a way that would make Orwell blush.

Here’s Capito:
“Contrary to popular belief, the tax hikes set to kick in in less than four months affect more than those who drive exotic cars and own multiple homes. In fact, nearly every tax-paying West Virginian will see taxes increase if Congress does not step-in. That’s the plain and simple truth.”
As someone who spends half of her time in Washington, DC, Capito knows full well that NO ONE is talking about letting all of the tax cuts expire in 2011. What’s on the table is 1) extending the Bush tax cuts to those making under $250,000 ($200k for single filers) and renewing all of the Bush tax cuts. So there is absolutely no reason for Capito to confuse voters the a “plain and simple truth” that presents a false choice.
Perhaps more egregious is the “plain and simple truth” that West Virginia benefits the least from extending the Bush tax cuts to the wealthy. Approximately 0.9% or about 8,000 tax filers in West Virginia have AGI over $200k or are married have AGI over $250k. While this isn’t a good thing, West Virginia has the smallest percentage of tax filers that meet these criteria in the nation. Since this reality gets in the way of her story, Capito has to deceive voters and conveniently leave out important information that might make them second guess their own interests,  This is the only way to sell plutocracy.
The truth is, if your income is $250,000 per year and you live in West Virginia you can “drive exotic cars and own multiple homes.” Just ask this guy.
Capito also asserts falsely that letting the tax cuts for the wealthy expire will hurt small businesses:
“Our nation’s small businesses will once again bear the brunt of ill-thought policies. On the first of the year, small business income will be taxed at higher rates and their ability to expense capital investment will be reduced to nearly one-fifth of the current rate. It seems like our nation’s job creators can’t catch a break.”
How many small businesses will pay higher taxes under Capito’s plan?
Answer: 3%
The irony in this debate is that the wealthy will benefit more in dollars terms from ending the tax cuts for the wealthy than middle class tax payers. 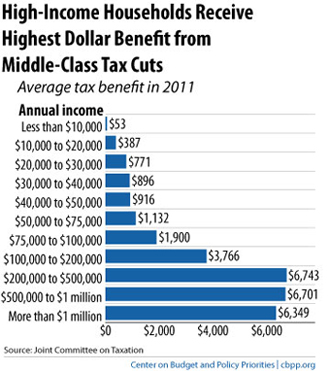