AP ran an interesting piece this afternoon showing that West Virginia’s economy is struggling despite good job growth. The article noted that the state’s seasonally adjusted unemployment rate rose to 9.6% in December 2010 (although Work Force WV has the rate at 9.4), rising slightly above the national rate of 9.4% for the first time since the Great Recession began in December 2007. (The article also pointed out that the Mountain State had the fourth highest taxpayer supported debt in the nation at $8.9 billion. More on that another time)

State Deputy Revenue Secretary Mark Muchow noted that “We’re in the midst of a recovery, and that the “labor force is expanding.” Mr. Muchow also noted that the “state added between 8,000 and 10,000 jobs last
year” and that he’s “hearing that employers want to hire but are having trouble finding qualified workers.” 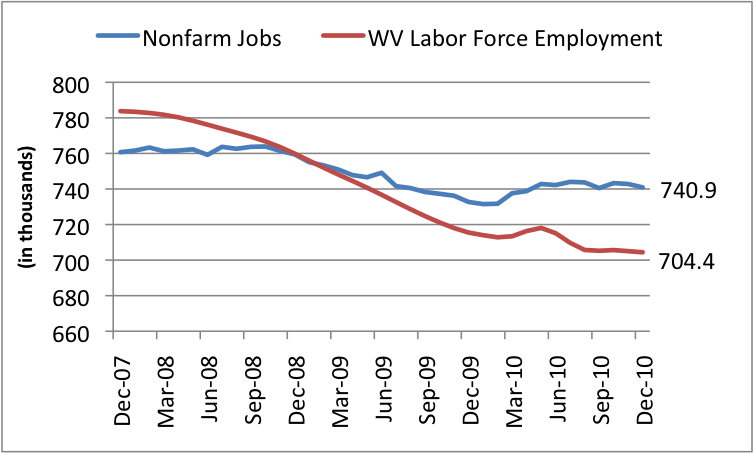 While West Virginia has gained roughly 9,400 jobs from Jan 10 to Dec 10, there are 9,630 less West Virginians that are employed. In fact, this is the lowest number of state residents with a job since 1993. West Virginia’s labor force is also at a 17 year low.

While Mr. Muchow is right that the state is adding close to 10,000 jobs, our labor force is not “growing.” While many (especially the younger members of the labor force) may be enrolling in higher education institutions, there is a good chance many have given up looking for work. Or, as Mr. Muchow says, there may be structural employment problem where our labor force doesn’t have the skills necessary to find a job. However, most of the nonfarm employment gains over the last year were in government and leisure and hospitality, although mining and logging (which includes natural gas extraction) gained about 2,500.

What does this all mean? I am not sure.While the state is gaining jobs at a respectable pace, jobs seem to be going to workers that do not live in the state. In terms of state fiances, this is probably okay as long as there paying state taxes. However, you have to wonder if our state could benefit from a major boost in workforce training that could improve the state’s labor force and make us more competitive with surrounding states. According to CLASP, West Virginia spends only 0.29% of its budget on community colleges. This is the fourth lowest in the nation. And according to a 2004 GAO report, West Virginia spends nothing on employment placement and training.

If our state wants to gain a better economic footing, the state should take a serous look at helping our struggling workforce.