We learned last week from the Associated Press that Governor Tomblin is pushing legislation to require some online retailers with facilities in the state to collect sales taxes. The legislation (HB 2754 & SB 377) is commonly referred to as an  “Amazon law” because in many states, like West Virginia, the online retail giant does not charge state sales tax on purchases of goods sold in a state despite having a physical presence (a 7,000 square foot warehouse in this case) in a state. The bill would also apply to any out-of-state retailer that maintains a warehouse, office, or other facilities in the state.

According to the State Tax Department, adopting this legislation would increase revenues from $7 to $10 million per year. What wasn’t pointed out in the AP story was that the revenue from this legislation is included in the governor’s proposed FY 2014 budget and revenue estimates (see page 30). Therefore, if the legislature does not pass the Amazon bill, it will have to find an additional $7 to $10 million in revenue or cut state expenditures by this amount.

As the map below highlights, many states require Amazon to collected sales taxes: 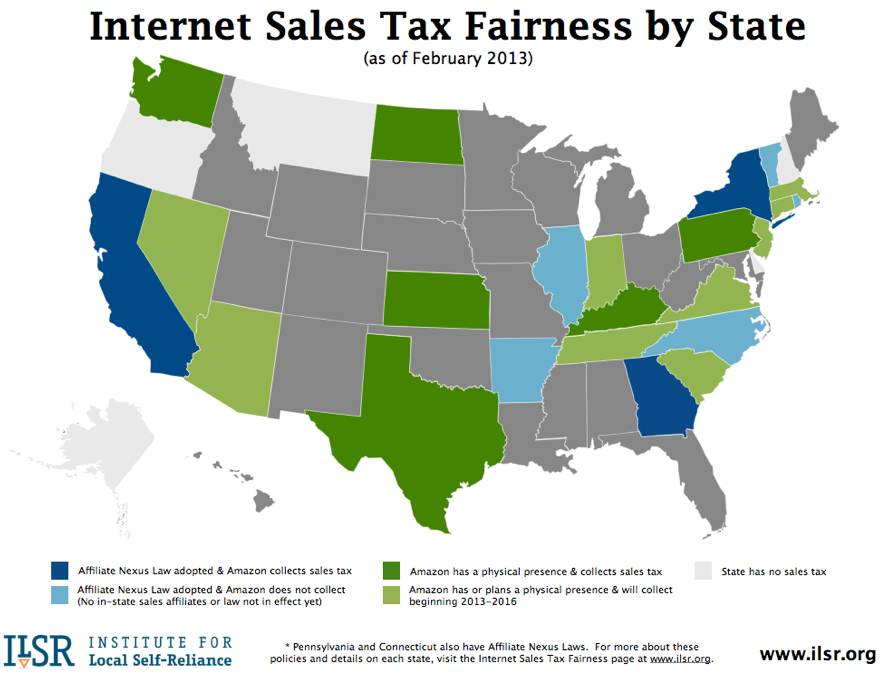 As Michael Mazerov from the national Center on Budget and Policy Priorities points out here, Amazon laws have many advantages,  including providing much-needed revenue, reducing the competitive disadvantage faced by local retailers and other online retailers that do collect sales taxes, and reducing the regressivity of the sales tax.

With our state already facing large cuts to higher education and other services and programs, passing the Amazon law is an important step toward balancing our budget and ensuring equity in our state’s sales tax. Governor Tomblin has showed leadership in including it in his budget this year and now it’s up to the legislature to make sure it happens.