Poor oral health is widespread in West Virginia. It significantly affects the employability of our workforce, contributes to higher emergency room utilization, and is often both an indicator of and a contributor to other chronic health conditions. According to a 2014 report, only 40 percent of West Virginians have dental insurance.[1] While Medicaid expansion has made significant strides[2] in giving thousands of low-income West Virginians health coverage, dental benefits (other than emergency extractions) are not covered for adult Medicaid beneficiaries, leaving out a critical component of health care for the approximately 300,000 adults[3] over the age of 21 who rely on Medicaid. PDF of report.

While federal law requires dental benefits for children and youth under age 21 in state Medicaid programs, adult dental benefits are classified as optional services in Medicaid. As an incentive, the federal government will provide a significant portion of federal matching dollars if states opt to offer these benefits, making it a good investment for all states[4] and West Virginia in particular. West Virginia has the second-highest federal match for Medicaid services in the nation[5]. Ensuring that adult Medicaid beneficiaries have access to preventive and regular dental care can reduce the development of oral disease and facilitate early diagnosis and treatment,[6] producing a significant return on investment.

Many West Virginians lack access to regular dental care, especially low-income residents and people of color. A 2014 study in the Journal of the American Dentistry Association (JADA) found that West Virginians whose incomes are below the federal poverty level are 18.7 percent less likely to receive dental care services than nonpoor adults, and researchers note that the utilization gap is growing over time.[7]

According to a 2018 survey from the Center for Disease Control and Prevention (CDC), there are large disparities across race, educational attainment, and incomes in dental care utilization. For example, only 32 percent of West Virginia residents with annual incomes below $15,000 have visited a dentist in the past year, while nearly 75 percent those with incomes above $75,000 have done so.

Over the long-run, the state’s costs of providing dental services will likely be offset by savings from improved health outcomes, reduced use of emergency department services for dental conditions, and reduced Medicaid expenditures on the related chronic conditions impacted by oral health.

West Virginia is one of only 16 states to offer no dental coverage to adult Medicaid beneficiaries outside of emergency extractions (Figure 1). The remaining 35 states offer more comprehensive coverage including some combination of preventive services, restorative services, periodontal services, dentures, oral surgery benefits, and orthodontia.[8] West Virginia also limits emergency extractions to two per year, a restriction not seen in other states, including those that offer only emergency benefits.[9] 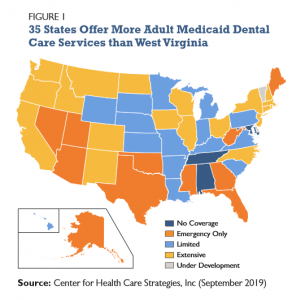 Adult dental benefits also vary by state in terms of copays and benefit limits. There are 19 states that charge copays to some populations, ranging from 50 cents to $7 per visit or treatment. Meanwhile, thirty-five states limit services, either via an annual benefit limit, limits on the quantity of services allowed annually, or by requiring prior authorization for dental services.[10] The costs of not covering dental care for adults can be significant to state budgets and the Medicaid program.

Nationally, visits to emergency departments to treat dental conditions cost the U.S. health system $1.6 billion each year, and one-third of that is paid by Medicaid.[11] In 2016, Medicaid paid for $10 million in dental-related Emergency Department visits in Maryland, another state that does not offer adult dental benefits in Medicaid.[12] Untreated oral health conditions are also strongly correlated with several chronic health conditions including coronary artery disease, diabetes, and pregnancy complications, likely burdening the system with increased health care costs in those areas.

A growing body of evidence has shown that oral health plays a role in several chronic diseases including diabetes and heart disease. Heart disease is the number one cause of death in West Virginia and diabetes is the sixth.[13] Additional chronic conditions that are impacted by untreated oral conditions include atherosclerotic disease, osteoporosis, kidney disease, and pregnancy complications.[14]

Regular oral care, including treatment for periodontal gum disease led to a 40 percent reduction in diabetes-related costs for Type 2 Diabetes patients and a 73 percent reduction of related-costs for individuals with Coronary Artery Disease, according to one study.[15]

Additionally, many Medicaid beneficiaries who go without regular dental care end up in the emergency room for treatment and pain control of chronic dental conditions. In Maryland, more than 22,000 adult Medicaid recipients visited hospital Emergency Departments in 2016 for dental-related conditions.[16] Hospital emergency departments are generally not equipped to provide appropriate treatment for these conditions and often only address palliative care, meaning that the visit is more expensive than if it were treated in the appropriate setting and the underlying condition often goes unaddressed.[17] The average cost of a Medicaid beneficiary’s treatment for dental problems in a hospital-setting is ten times costlier than preventive care in a dentist’s office.[18]

In addition to physical health concerns, dental care (or lack thereof) also impacts mental health. Missing and decaying teeth are associated with depression.[19] Dental benefits that only cover tooth extractions rather than fillings or preventive care, as we have in West Virginia, can increase the stigma associated with missing teeth and negatively impact employability. 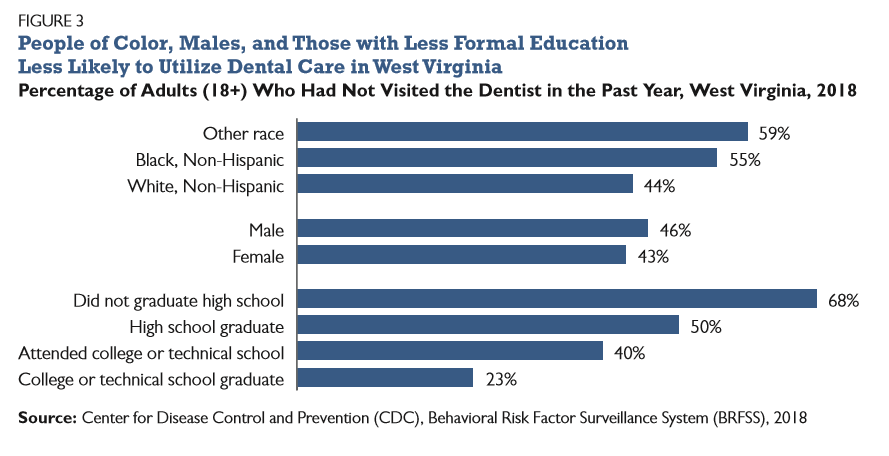 Seniors in West Virginia are at serious risk for oral health problems and tooth decay. A survey conducted among West Virginia seniors at a charitable meal site found that 34 percent had not seen a dentist in five or more years, 77 percent were missing six or more teeth, and 32 percent had untreated tooth decay.[22] West Virginia has the highest rate of seniors with edentulism, or tooth loss, in the nation with 33.6 percent or one in three seniors experiencing edentulism.[23] The high rates of edentate seniors in West Virginia may have not happened by accident. Since West Virginia does not offer dental benefits, this could have led to many Medicaid beneficiaries getting all of their teeth extracted, as it is the only treatment option offered. Medicare does not include an oral health benefit,[24] so for many low-income “dually eligible” seniors who have both Medicare and Medicaid, comprehensive or preventive oral health treatment is unavailable.

Over one-third of West Virginians with disabilities rely on Medicaid for health coverage, leaving that population disproportionately impacted by the lack of adult dental benefits within the program.[25] The American Academy of Development Medicine found that people with intellectual and development disabilities often face difficulties in finding dental clinicians with the proper training to treat them, further exacerbating the issue.[26]

In states where Medicaid does not cover dental needs, low-income individuals and families are left with few alternative options to access care. According to Kaiser Health, 43 percent[27] of all workers are not offered health coverage through their jobs, and low-wage workers are more likely to not be eligible for coverage because they of new, part-time, or temporary job status. Even if medical insurance is offered through a worker’s job, dental insurance may be unaffordable or not offered at all. Nationally, less than half (45 percent) of all private-sector workers are offered dental benefits, and among those working for employers with less than 50 employees, only one in four (26 percent) are offered dental benefits.[28]

Some Federally Qualified Health Centers (FQHCs), free clinics, and local health departments offer dental care on a sliding scale fee, but those sites are limited, they often have extensive waiting lists, and the copays can still be too costly for low-income adults.

Ultimately, in states that do not cover adult dental benefits in their Medicaid programs, access to dental care is out of reach for many low-income residents. In addition to health concerns, this is a challenge for West Virginia’s workforce, as many survey respondents note that their appearance can impede their ability to get a job,[29] in addition to the overall health issues associated with a lack of oral health care. The contradiction in our current system requires people in poverty to find a job and subsequent insurance to get dental care, but the same population’s lack of dental care is contributing to their employability challenges.

West Virginia can include adult dental benefits in its Medicaid program and get nearly three dollars from the federal government for each dollar the state spends via the Federal Medical Assistance Percentage (FMAP) for traditional Medicaid enrollees and a nine-to-one match for the adult expansion population.[32] In FY 2020, West Virginia’s FMAP, which is calculated based on the state’s average per capita income, is 74.94 percent, the second highest matching rate in the country.[33] For every state dollar spent on Medicaid services, including dental, the federal government puts up $2.99. The match for the Medicaid expansion population is an even better deal, giving nine federal dollars for every state dollar spent.[34] In order to add adult dental benefits to Medicaid, the West Virginia Department of Health and Human Resources (DHHR) would submit a state plan amendment to the Centers for Medicare and Medicaid Services (CMS) to begin covering the optional benefit.[35] Lawmakers can pass legislation adding the benefit to state code and instructing the WV DHHR to apply for and implement the optional benefit.

According to a West Virginia Department of Health and Human Resources (DHHR) analysis, adding dental benefits to Medicaid coverage for all adult beneficiaries (including base adults on Medicaid and the expansion population) would cost approximately $7 million annually in new state funding for a total investment of $54 million when including the federal match. This estimate assumes a $1000 annual benefit cap and a 20 percent utilization rate. The average utilization rate across states that currently offer an extensive adult dental benefit to Medicaid recipients is 24.9 percent.[36] Adult dental coverage was associated with a 12.9 percentage point increase in the probability of having had a dental visit within a given year.[37]

The American Dental Association estimates West Virginia could cover dental benefits for adult Medicaid enrollees over the age of 21 for $15.2 million annually in state funds. This assumes the average 24.9 percent utilization rate and an average cost per enrollee of $818.47 annually.[38]

Adding preventive and other dental benefits to adult Medicaid will likely result in reductions in the utilization of hospital emergency departments for dental care. In states that eliminated adult dental benefits for Medicaid, Emergency Department use for dental conditions nearly doubled.[39] In California, whose state officials scaled back adult dental benefits in Medicaid in 2009, dental-related emergency department visits increased by 68 percent.[40] Given that correlation, we can expect reductions in emergency department utilization for dental conditions when coverage is expanded. Additional potential state and federal funding savings might occur via reductions in need for grants supporting clinics that provide free or low-cost services to the uninsured and current Medicaid enrollees.

Over the long term, West Virginia should see reductions in Medicaid costs for health conditions that are highly correlated with oral health, including diabetes, heart disease, and pregnancy complications.[41]

The American Dental Association estimates that there is “sufficient capacity” nationally within the current dental care system to address the increased utilization of dental care that would come with expanding dental benefits to this population.[42] In 2013, 70 percent[43] of the licensed dentists in West Virginia participated in the state’s Medicaid program, much higher than the national average of 39 percent.[44]

Oral health is a vital piece of overall well-being. In addition to dental conditions, a lack of access to oral care has been associated with several chronic conditions, including heart disease and Type 2 Diabetes, which are among the most deadly and costly health conditions in West Virginia. Poor oral health, including loss of teeth, also impacts employability and absenteeism, worsening residents’ financial stability and our state’s economy.

Investing a small amount of money to cover oral health benefits for adults who rely on Medicaid provides substantial long-term gains for West Virginia, including better health outcomes, lower emergency room costs, and greater employability of our workforce. Without offering dental benefits in Medicaid, dental coverage will continue to be unaffordable and out of reach for many vulnerable West Virginians.