We know that repealing the Affordable Care Act will increase the number of uninsured Americans by tens of millions. We also know it will significantly raise premiums for people who purchase health insurance in the individual market (people without employer-based health insurance and who are not eligible for Medicaid or Medicare). Read.

In June, 2015 the Congressional Budget Office of the U.S. Congress analyzed the budgetary effects of repealing the ACA and estimated that it would increase federal budget deficit by $137 billion over the 2016–2025 period. 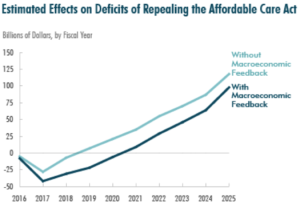 An ACA repeal would restore this Medicare tax break for the wealthy:

– Millionaire household would receive a tax cut on average of $49,370 a year 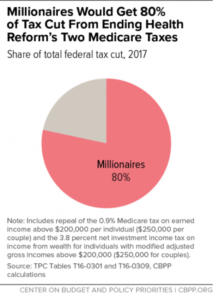 Without this and other revenue in the ACA, any replacement plan can only leave more people without insurance and others with higher premiums and copayments.