Yet another analysis confirms the potential harm of repealing the Affordable Care Act. The Congressional Budget Office and the Joint Committee on Taxation examined the impact of the repeal bill passed by Congress in 2015 and 2016 (H.R.3762). 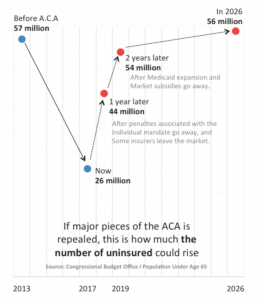 ACA Repeal Will Cause Chaos in the Nation’s Individual Health Insurance Markets
– For people without employer-based coverage or public health insurance, it could mean no insurance options are available to them
– About half of the nation’s population lives in areas that would have no insurers offering coverage in the individual market in the first year after repeal
– By 2026, three-quarters of the population would have no insurers

The West Virginia Center on Budget and Policy will release an Issue Brief that outlines the potential risks of an ACA repeal to West Virginians next week.