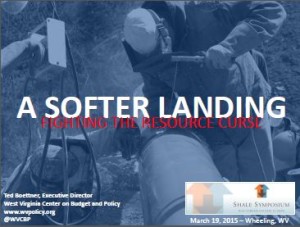 On March 19, 2015, WVCBP Executive Director Ted Boettner was part of the Shale Symposium sponsored by the Federal Reserve Bank of Cleveland at Wheeling Jesuit University. The symposium covered early shale development, shale’s growth-to-boom phase, and its declining development-to-bust phase. Ted’s presentation was titled “A Softer Landing – Fighting the Resource Curse” and described how creating a permanent mineral trust fund can help a state plan for a future after its energy reserves are depleted. View it here. For more on the event and other speakers who attended, visit here.