In the last post, I showed that the decline in coal production was heavily concentrated in the southern part of the state. While there are many factors at play, none is probably more important than this one.

#2 lower productivity is at heart of coal decline in W.Va.

If you want to understand why West Virginia and Central Appalachia coal production is struggling, the first place to look is productivity or the amount of coal being produced per hour of work. Productivity is the sine qua non of coal mining. It plays a large role in determining the price of coal, the costs of mining coal, and the profits being made from coal. It also helps explain why some mines are shutting down at the same time others want to open that are less than 100 miles apart.

The drop in coal mining productivity, despite technological improvements, in West Virginia and the Appalachian region reflects the depletion of the area’s coal reserves. As coal seams get thinner, they becomes more expensive to mine. As Downstream Strategies highlighted in its excellent 2012 report, the central reason for the sharp declines in productivity  in Central Appalachia has been the “the exhaustion of the thickest, most accessible coal seams.” Other factors impacting productivity include demand for coal, mining costs, workforce demographics, mine permitting, and regulatory oversight.

The drop in productivity from the depletion of the area’s coal reserves can also help partly explain the growth in the value of the state’s reduced severance tax rate for thin-seam coal production. 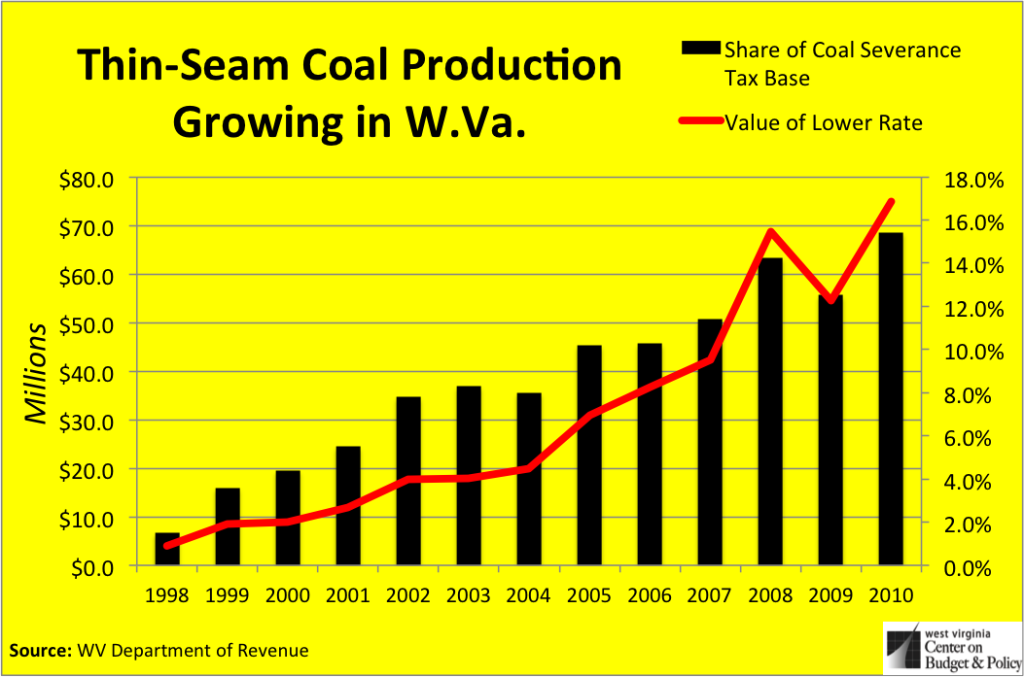 According to experts, there also do not seem to be any technological improvements that will increase productivity in the future. The latest projections from the U.S. Energy Information Association also confirm this finding showing that productivity will continue to decline in West Virginia.

As I will show in the next post, the rapid decline in coal mining productivity in West Virginia has resulted in the state losing coal market share and could make it even harder to compete with other energy sources and coal basins as regulations move forward.