With the 2020 legislative session looming, now is as good a time as any to check in on one of the legislature’s favorite proposals, eliminating the business personal property tax. Once again, the elimination of the tax is at the top of legislative priorities. And with state revenues stalling and budget cuts likely, the nearly $400 million price tag for eliminating the tax spells almost certain painful budget cuts or shifting the tax load onto West Virginia’s low and middle-income residents.

And while according to Senate President Mitch Carmichael, “The personal property tax on business inventory and equipment is the single biggest job killing tax in our state,” the evidence does not support that statement. Studies examining state-level inventory and other personal property taxes concluded they rarely impact business location decisions or have a significant impact on employment levels in manufacturing, wholesale, or retail industries. In fact, in recent years, more manufacturing jobs have been added in states with the “job-killing” business inventory and equipment tax than in states without it.

A recent peer-reviewed study looking at Ohio’s elimination of their personal property tax found no impact on manufacturing employment. In fact, the study suggests that eliminating the tax on machinery and equipment created an incentive to automate, and manufacturing employment in Ohio ended up lower than it would have been had the tax not been eliminated.

So while there is little evidence for the economic benefits, the massive tax cut would have a profound impact on state and local government finances, straining the ability of municipalities, county governments, and school districts to provide needed services and would likely lead to cuts in services or a dramatic tax shift, such as higher property taxes on homeowners or higher taxes on real property owned by small businesses. 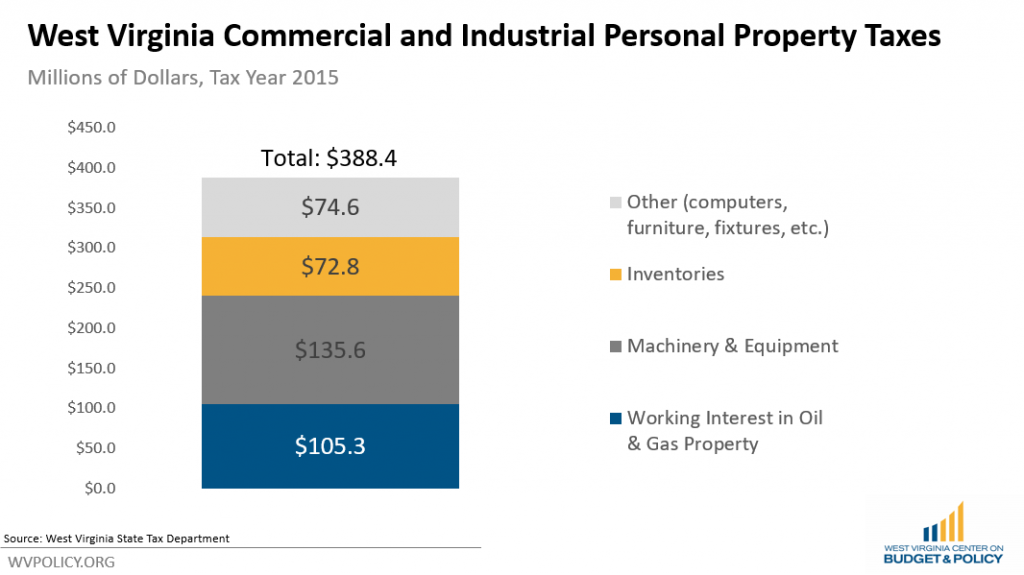 If the business personal property tax were to be fully eliminated, counties and municipalities would lose an estimated $130.5 million in annual property tax revenue, based on FY 2016 property tax collections.

The state would lose an estimated $1.6 million in revenue, but would also have to pay out an additional $110.1 million through the school aid formula due to the loss of revenue by school districts, for a total annual fiscal impact of $111.7 million for state government.

School districts would be the hardest hit by the elimination of the business personal property tax. Schools would lose $256.2 million in annual property tax revenue. While $110.1 million would be replaced through the school aid formula, schools in West Virginia would still lose a total of $146.2 million annually. Since school levy rates are set by the legislature, and since most school excess levies are at or near the max rate, local school districts would be unable to fill this deficit, and the state would need to provide additional revenue to maintain the current educational system. 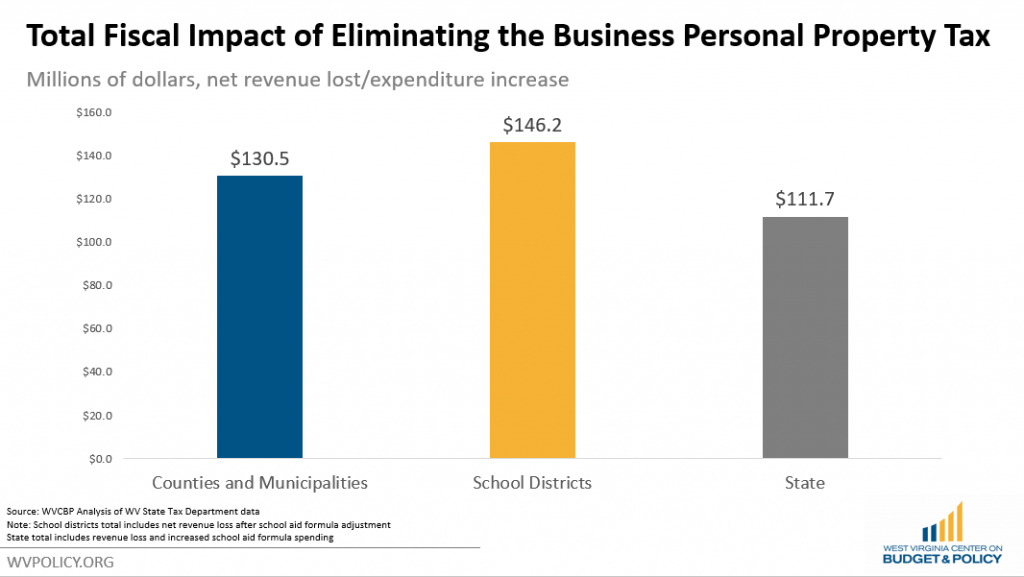 Even partial repeals would prove costly for state and local governments. Repeal of the tax on only industrial personal property, like the governor proposed last year with his “Just Cut Taxes and Win” Amendment, would have a total cost of $150 million. Simply repealing the tax on machinery and equipment would cost $135 million. And while the tax is commonly referred to as the “inventory tax,” inventories make up the smallest portion of the tax. But repealing the tax on business inventory would still cost nearly $73 million.

The tables below break down the fiscal impact of the full and partial repeals of the business personal property tax by county based on FY 2016 or Tax Year 2015.