Blog Posts > 2021 Regional Jail Cost Freeze is Not a Long-term Solution to the Overcrowding Crisis
June 30, 2021

This post was co-authored by Myya Helm, 2021 Summer Research Associate

Last week, the Legislature provided a one-year relief to county governments by freezing the current regional jail per diem at $48.25, rather than allowing it to increase as scheduled to reflect the true daily cost of jail incarceration, nearly $55. In addition to the freeze, the Legislature allocated more than $9 million of the state’s $250 million Fiscal Year (FY) 2021 budget surplus to the Division of Corrections and Rehabilitations (DCR) to help cover regional jail costs. On its own, this momentary relief is simply a band-aid fix for county budgets at the expense of state funds, and it will not solve the overcrowded, costly regional jail crisis.

West Virginia’s regional jail population surged between 2009 and 2019, with the average daily count increasing by nearly 33 percent despite a decline in overall state population over the same period. The jail system saw a slight decrease in 2020 due to a rapid, but short decarceration period following the COVID-19 state of emergency. Still, the average daily count has been higher than the regional jails’ 4,265 person capacity for nine out of the last 12 years.

Overcrowding in correctional facilities produces a range of consequences, such as increased risk of violence for staff and incarcerated people, increased risk of communicable disease transmission, and a higher likelihood of experiencing stress and psychological effects. Just this month, three people were assaulted in Northern Regional Jail. And since the beginning of the COVID-19 pandemic, people incarcerated in West Virginia’s prisons were three times more likely to contract the virus than the general population.

The population growth in the regional jails comes at a heavy cost to county governments, who collectively spent an average of nearly $51 million annually between 2014 and 2019 on per diem jail fees. The DCR charges counties monthly for the amount of person-days people arrested in their respective counties were incarcerated in a regional jail.

The $48.25 cap, statutorily held in place in 2018 at the same rate it had been since 2013, was set to expire on July 1, 2021. It was expected to increase nearly 14 percent to reflect the actual per diem cost of $54.88. The legislation passed during last week’s special session to freeze county jail costs for another year also clarified that future per diem rates would be adjusted annually and calculated using the previous three fiscal years of actual costs.

The expected 14 percent increase would be disastrous for counties, who between 2014 and 2019, were billed by the DCR more than they could actually afford to pay. In 2019, counties were billed $53.4 million for their share of regional jail stays, yet paid $52.2 million.

To illustrate how an increase in jail per diem would affect counties, we can use the FY 2019 billing data as a baseline (WVCBP does not have access to complete FY 2020 billing and payments data). The earliest that counties could be responsible for paying for a higher per diem would be July 2022. A 14 percent increase of the FY 2019 jail costs would bring the total billing to nearly $61 million statewide by June 30, 2023. Counties could avoid this projection by decreasing the number of people they keep in pretrial detention.

Looking at the aggregate billing and spending data masks the reality that some counties would be hit especially hard by this increase. Several counties are consistently past due on their regional jail bills. Counties like Cabell, Calhoun, Clay, and Webster struggled to stay on top of their regional jail obligations between 2014 and 2019. Other counties have had to make difficult budgetary decisions. Kanawha County voted to increase property taxes in 2017 to help pay for its rising regional jail bills, costing the county nearly $5.4 million annually between 2014 and 2019, adjusted for inflation. A 14 percent increase in its 2019 payments would cost the county $5.8 million in FY 2023, an increase of more than $700,000. County commissioners have spoken publicly about forgoing county employee pay increases and sacrificing investments in services and projects that would benefit their residents because of their regional jail obligations.

The main driver of regional jail costs is that counties have been largely unable to rein in their pretrial jail populations. Counties are responsible for paying per diem costs for people detained pretrial and people who have been sentenced to jail time for a misdemeanor. In FY 2019, people detained pretrial accounted for 50 percent of the average daily jail population, or 2,629 people out of 5,172. In FY 2020, this percentage was virtually unchanged despite a small drop in the average daily population.

On June 28, 2021, 2,661 people were being held in jail pretrial, which is comparable to the number of people who were in pretrial detention at the beginning of 2020, before both the pandemic-induced decarceration effort and the bail law went into effect. In other words, magistrate courts have not implemented HB 2419 in a way that follows through on its purpose—reducing the pretrial population.

Improving the implementation of HB 2419 requires that all magistrates and prosecutors throughout the state are fully aware of their obligation to presume release for nonviolent offenders and ensure the least restrictive means necessary for all offenders. To do this, policymakers and the West Virginia Supreme Court must thoroughly educate magistrates of the change and ensure better adherence to the new law with public data collection and analysis.

The West Virginia Criminal Law Reform website has a policy simulator that allows visitors to toggle the slider to visualize how much taxpayer funds could be saved if regional jails reduced their pretrial population. The image below shows that on June 24, 2021, 501 people were being held pretrial at North Central Regional Jail (NCRJ), costing those counties approximately $24,000. If the jail reduced its pretrial population by just 25 percent, the counties that use NCJR could save over $2 million over a single year. 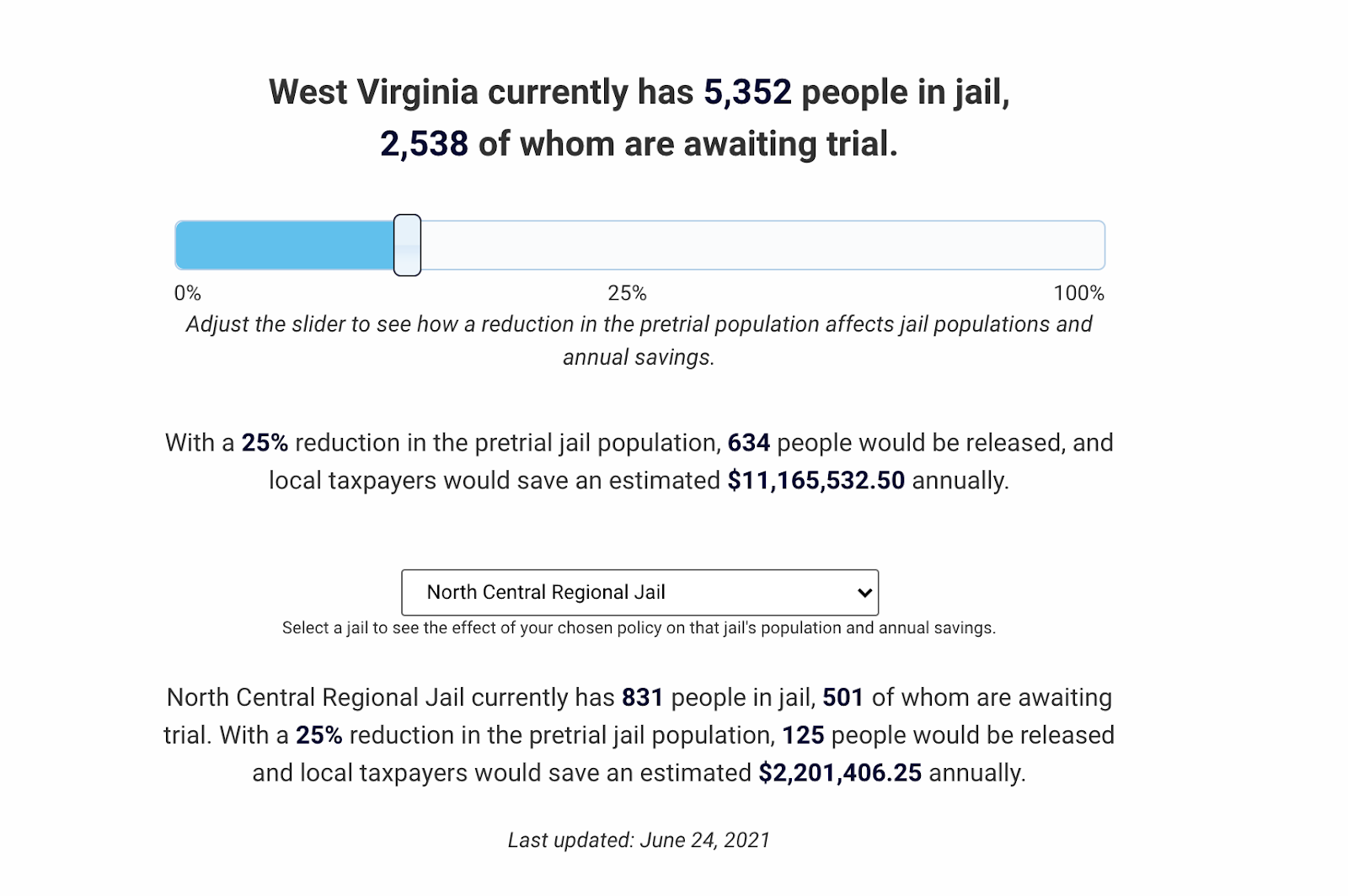 A major factor prosecutors and magistrates consider when determining whether or not someone should be released from jail pretrial is the likelihood that they will appear for subsequent court hearings. Adopting an automated court hearing notification service could reduce instances of failure to appear, which often happens when people aren’t aware of their court and hearing dates. The reduced likelihood that defendants will miss their hearings can be a time- and resource-saving initiative.

Home incarceration is also a cheaper alternative to pretrial jail incarceration. Typically monitored with the use of electronic ankle monitors, home incarceration is an option for all counties in West Virginia for pretrial release, probation, and as an alternate sentence. Although this service should not be used when the defendant is eligible for personal recognizance pretrial release, counties could elect to use and pay for the option more frequently, resulting in an approximate $36 to $42 in savings per day. Other strategies to lower jail bills include reducing arrests for technical violations of probation and parole, as well as ending the use of jails for long-term incarceration.

Finally, the American Rescue Plan provides a unique and unprecedented opportunity for local governments to invest in public safety. Local governments in West Virginia are receiving nearly $700 million from the federal government to assist in their recoveries from the COVID-19 pandemic. This funding can be used for a range of programs that can reduce crime and violence, while increasing access to education, housing, and mental and behavioral health care. Counties could leverage funding from the American Rescue Plan to create programs that will lower their regional jail costs and ultimately reduce their reliance on the justice system.

The debate over which entity — counties, municipalities, or the state — should bear more of the burden of paying for the regional jail costs misses the point. No matter which government entity pays, it is West Virginia taxpayers that foot the bill. The only way to reduce regional jail costs is to reduce our regional jail population. County commissioners and state legislators must work closely with justice system stakeholders, including prosecutors, magistrates, and law enforcement, to develop a path toward sustained decarceration.