Ted was quoted in the State Journal on Wednesday talking about coal employment, how it dropped at the end of last year and what’s making that happen. Many factors are contributing to the loss of jobs in the mining industry and it’s unclear if this is a long-term trend or a short-term blip.

In continuing coverage on how many West Virginians have enough money set aside in their personal rainy day funds, Stuart was cited in West Virginia Public News Service coverage on the disadvantages facing the state’s low-income families if they were to lose their jobs or face another hardship.

When individuals and companies use offshore accounts to avoid paying taxes it hurts local and state budgets and costs the federal government $150 billion in lost revenues each year according to a new U.S. PIRG report. A West Virginia Public News Service article on the issue quoted Sean saying that there is no way to know what the state is losing since companies do not have to report anything about these tax havens.

On February 19, the WVCBP, along with the West Virginia Healthy Kids Coalition, will release a report on poverty in West Virginia. 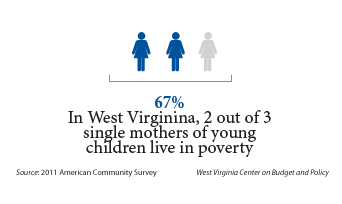 Evidence Counts – the WVCBP blog
This week Sean continued his series on how eliminating the personal property tax, while touted as a job creation measure, would most likely have no effect at all on the number of jobs in the state. We need to look no further than Ohio to see that there is no connection between business taxes and job growth.