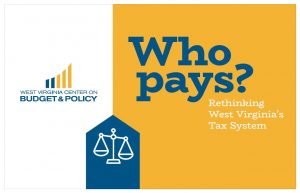 To get a sense of a state’s values, one often need look no further than its tax system.

What a state spends its tax dollars on and how it acquires those tax dollars typically reveals a lot about the priorities of its people—what they care about and what they stand for. In theory, it’s a direct reflection of their collective values. But this doesn’t seem to be the case for West Virginia.

As it currently stands, West Virginia’s tax system places an unreasonable burden on working families and those who have the least. In the past two decades, state taxes paid by individuals and families increased while taxes paid by businesses declined. At the same time, low- and middle-income families have been paying a greater share of their income in taxes than wealthier West Virginians.

This is a system that is neither fair, nor strong, nor sustainable. It demonstrates little respect for those among us who are working hardest to put food on their tables and provide for their families, and it certainly does not uphold the promise of the American Dream: that through hard work, upward social mobility (and, in the very least, some amount of financial security) is possible. In fact, it does just the opposite, perpetuating income inequality and preventing honest, hardworking West Virginians from achieving success.

Clearly, our state tax system and collective values are in severe misalignment. Where the former should be giving hard workers a hand up, it is holding them back. Where it should be promoting fairness and equality, it is widening an already tremendous divide. But we made this system—and we can remake it to better represent the values of the West Virginia we all know and love.

The purpose of this guide is thus not only to explain how the state gets its resources, but also to respond to the pressing need for re-examination, re-organization, and re-alignment of West Virginia’s tax system. In this document, you will find a thorough exploration of the strengths and weaknesses of our state’s tax system, along with recommendations informed by the West Virginia Center on Budget and Policy’s research. Ultimately, its objective is to identify viable ways of creating a more effective and structurally-balanced tax system, one that can help our state both produce a stable budget and achieve a fairer and more equal economy. Because West Virginia’s tax system should reflect West Virginia’s values.

For hard copies of this booklet, or to arrange a speaker to present its findings, please contact us.