There have been a number of tax proposals this legislative session, the two that have gained the most traction are the proposals to increase the sales tax from 6% to 7% for highway funding, and increasing the tobacco tax from $0.55 to $1.55 per pack of cigarettes.

While the state needs revenue both for fixing its infrastructure and balancing the budget, both the tax proposals would make the state’s tax system more regressive, since both fall more heavily on low- and moderate-income West Virginians. 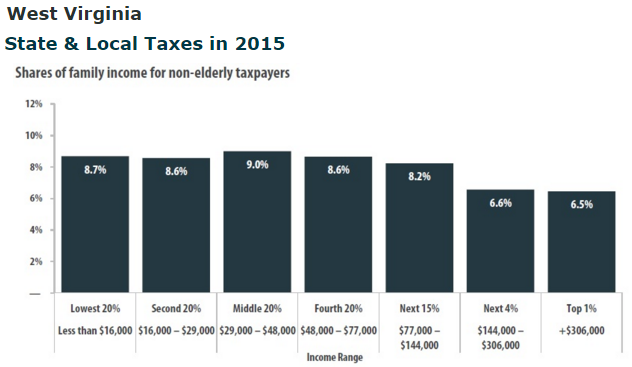 The sales tax is the state’s most regressive tax, with the lowest 20% paying 6.4% of their income in sales taxes, and the top 1% paying only 1.0%. In comparison the state’s income tax is progressive, with the share of income paid in income taxes rising with income levels, while the state’s property tax is relatively flat.

Raising the sales tax from 6% to 7% would add to the regressivity of West Virginia’s tax system. According to ITEP’s analysis, those in the lowest 20% of individual and family income would see their taxes as a share of income increase by 0.6% and those in the middle income would see an increase of 0.5%, compared to just 0.1% for the top 1%. The sales tax increase would increase revenue by an estimated $220.7 million. 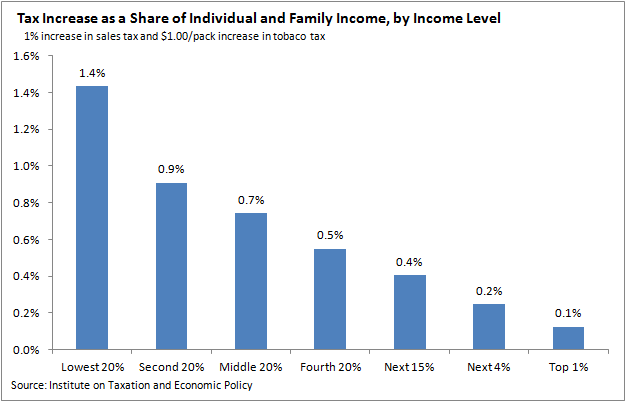 While fixing our roads and balancing the budget are important, and both need new revenue to do so, the current proposals ask more of those who have less. State lawmakers could offset the regressivity of these tax proposals by incorporating a State Earned Income Tax Credit into them, which, in addition to making our tax system more fair, would also encourage work and reduce poverty.