Recent comments by Mitt Romney about the “47 percent” have prompted discussion about who actually pays taxes and why. Mr. Romney’s sentiment was also recently echoed by West Virginia’s Representative Shelley Moore Capito at last month’s fiscal summit featuring Alan Simpson and Erksine Bowles, when Representative Capito asked about the 47 percent of Americans who pay no taxes.
So who all in West Virginia don’t pay federal income taxes, and what does it mean for tax policy? According to Census data, in 2010 about 494,000 of West Virginia’s 966,000 households paid no federal income taxes. The following chart breaks down those 494,000 households. 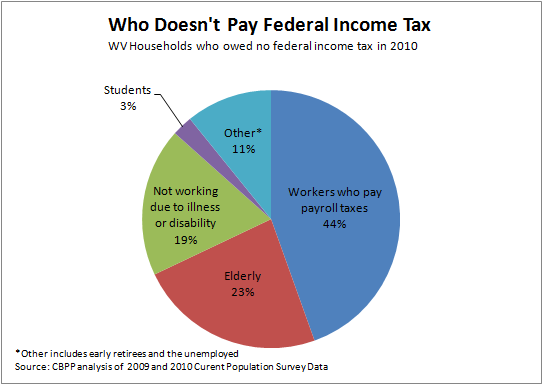 Contrary to some of the rhetoric surrounding the issue, the so-called 47 percent (or in WV the 51 percent) are not non-contributors who are dependent upon government. In fact, the majority, about 67 percent, are either workers who are paying federal payroll taxes, or the elderly who are retired, but have paid taxes for most of their lives. The importance of those who pay payroll taxes can’t be overstated. Payroll taxes, which are paid by nearly everyone who has ever collected a paycheck, make up more than a third of total federal revenue, and pay for the country’s major entitlement programs: Social Security, Medicare, and Medicaid.
The remaining third of those who pay no taxes in West Virginia are the sick and disabled, the unemployed, and students. And as the unemployed rejoin the workforce and students graduate and find jobs, they will begin paying taxes.
As for the implications for tax policy, there are two big reasons why many households pay no federal income tax – the Earned Income Tax Credit (EITC) and the Child Tax Credit (CTC). Over the last two decades, these tax credits for low-income working families with children have decreased the number of households paying federal income taxes. Any attempt to increase the number of households paying federal income taxes would have to start with these two tax credits.
The great irony of the supposed “dependency” mentality of the 47 percent is that the major reason they don’t pay taxes, the EITC and the CTC, were created to reduce dependency on government. The EITC was created to transform welfare from entitlements into incentives to work. When the EITC was expanded in 1986, President Reagan called it “the best anti-poverty, the best pro-family, the best job-creation measure to come out of Congress.” And it was successful, as the expansion of the EITC moved half a million families off of cash assistance and into the workplace. The same is true of the CTC, which was created by Congressional Republicans and expanded under both Presidents Bush and Obama.
Both of these tax credits have reduced poverty, provided economic security, and increased the number of Americans participating in the labor force and contributing to the economy, all while reducing entitlements and dependency on government.
47 percent of Americans and 51 percent of West Virginians may not pay federal income taxes, but it is not because they are entitled and dependent on government. In fact it is the opposite; they are taking advantage of policies that encourage them to work and support their families. And if they aren’t paying federal income taxes today, odds are they have paid in the past or will pay in the future. And even without the federal income tax, virtually everyone pays taxes in some fashion, be it sales taxes, excise taxes, property taxes, or the payroll tax. Whether they are buying groceries or pumping gas, there is no doubt that they are helping to pay for the government services that we all benefit from and use every day.