Blog Posts > Who Are The Uninsured in WV? Mostly the Working Poor
September 19, 2013
WVCBP

Who Are The Uninsured in WV? Mostly the Working Poor

Who are the uninsured in West Virginia?  Well, they are mostly the working poor, who, as it turns out, are exactly the people that the Affordable Care Act will help cover.

Data released today from the United State Census Bureau provide detailed estimates on household characteristics at the state level including income, education, employment, race, and health insurance coverage. According to this data, 14.4 percent of West Virginia residents, or 263,809 people, were uninsured in 2012.  So who are they?

The vast majority of the uninsured are working-age adults, 18-64, accounting for nearly 94% of all non-covered West Virginians.  Children under the age of 18, even though they constitute 21 percent of the state’s population, only make up 5.7 percent of the uninsured.  Within the working age group, 25 to 34 year olds were the most likely to be uninsured as nearly one in four lacked insurance in 2012. 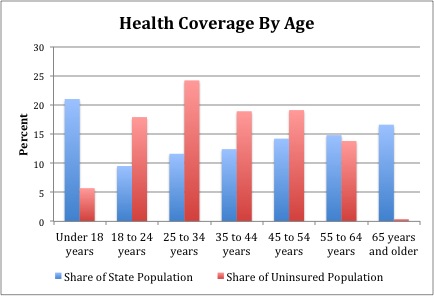 With A High School Education or Less…

Education level can be a good predictor of health insurance status. Those in West Virginia with a high school diploma or less are more likely to be uninsured than someone with a college degree.  While about one in five West Virginians have a college degree, they account for less than one in ten of those who are uninsured. 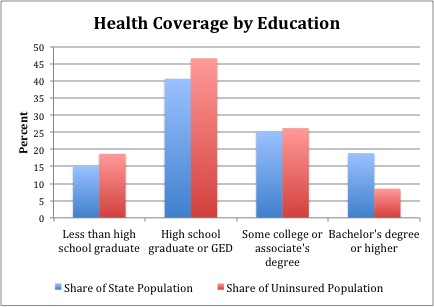 Who Most Likely Work…

Full-time workers are less likely to be uninsured than people who work less than full-time or not at all, however, two out of every three uninsured West Virginians worked full or part time in 2012. 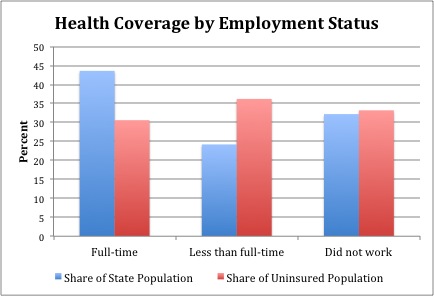 Probably in the Retail or Restaurant Industry…

A more detailed break down of employment status by industry shows that the workers most likely to be uninsured work in retail or food services, combining to account for almost 40 percent of the uninsured population throughout the state.  While accounting for over a quarter of all workers in the state, those employed in education and health care make up about one-sixth of the uninsured. 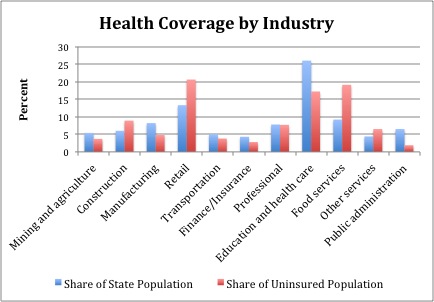 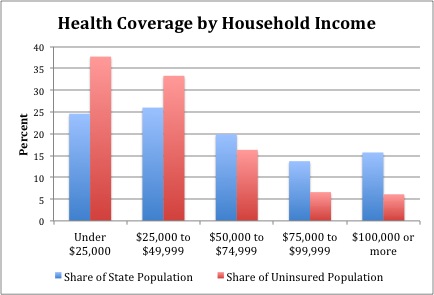 Overall, the ACS data released today by the Census Bureau paint the same picture of the uninsured in West Virginia that we’ve known for quite some time – people with lower educational attainment and lower earnings are much more likely to be uninsured than those with college degrees and higher earnings.  What is most noteworthy, however, is that most of those who are uninsured do work, which directly contradicts the view that some people have of those who they believe are “gaming the system.”  The majority of the nearly 264,000 uninsured West Virginians are the working poor between the ages of 18 and 64; fortunately, this is also the group who are most likely to benefit from the Affordable Care Act through the expansion of Medicaid and tax subsidies that will be made available through the Marketplace insurance exchange.  By 2016, the number of those without health coverage in the Mountain State is expected to drop to around 76,000, a 70 percent decrease in the uninsured rate, thanks to the Affordable Care Act…I mean, Obamacare, I mean…the ACA…meh, whatever you want to call it.