Which is More Expensive – Tax Cuts or Free Tuition?

Last week, we took a look at the total cost of the state’s tax cuts of the past few years. According to state officials, cuts to the food tax and business taxes will cost the state $360 million in lost revenue this year, with more than half of the loss coming from the cuts to the corporate net income tax and the elimination of the business franchise tax.

Now there is a lot the state could have done with an extra $360 million per year. For one, we wouldn’t have had to cut the budget time and time again the past two years.

The table below shows the estimated number of in-state undergraduate students at each of the state’s higher education bodies, including both four-year and two-year schools, as well as  tuition and fees for one academic year for a full-time in-state student. 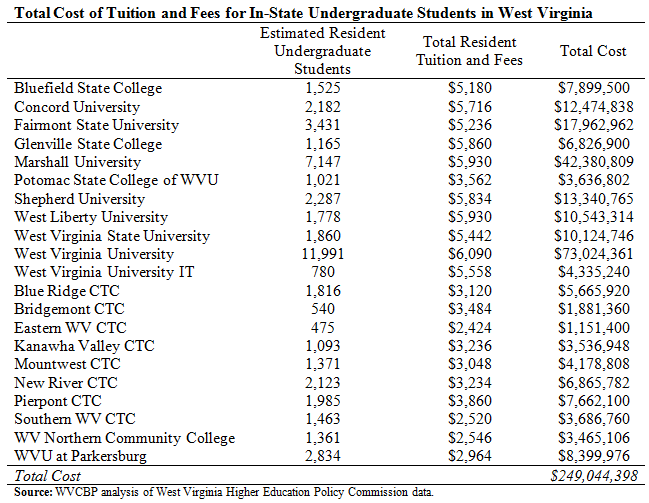 If the state wanted to, it could pay for full tuition and fees for all of its in-state undergraduate college students  for less than $250 million, far less than the $360 million in tax cuts. And, if anything, it would probably cost less than that. First, the $250 million includes federal grants and aid that the students would still be eligible for to help pay their tuition. In addition, the state already pays nearly $30 million per year in PROMISE scholarships, which is included in the total.

The state’s budget is all about priorities. By prioritizing our ranking on some “tax climate” index, the state missed out on an opportunity to fundamentally change the composition of its workforce and its future.