When is a Coal Layoff a Coal Job Loss?

West Virginia’s coal-mining families were given a scare last month when Alpha Natural Resources issued a WARN notice, notifying over 1,100 employees at 11 mining operations of potential layoffs. While those layoffs are projected to take place by October, don’t expect the number of coal jobs to fall by 1,100 that month. That’s because layoffs and job losses are measuring two separate things.

Layoffs and mine closures are a fact of life in a boom and bust industry like coal, but so are recalls and hires. While market conditions may make some older mines with thinner seams uneconomical to operate, others that promise more productivity are opened up. And as miners are laid off at some mines, miners are hired at others. For example, while Alpha closes mines and lays off miners, Keystone Industries is fighting to start a new mine adjacent to Kanawha State Forest near Charleston, WV.

So 1,100 layoffs doesn’t necessarily mean that there will be 1,100 fewer coal jobs in the state. Since 2009, West Virginia has averaged about 2,295 coal job separations per quarter, meaning every three months 2,295 coal miners are either laid off, retire, quit or are fired.  But during that same time period, West Virginia’s coal industry averaged 2,292 hires per quarter. 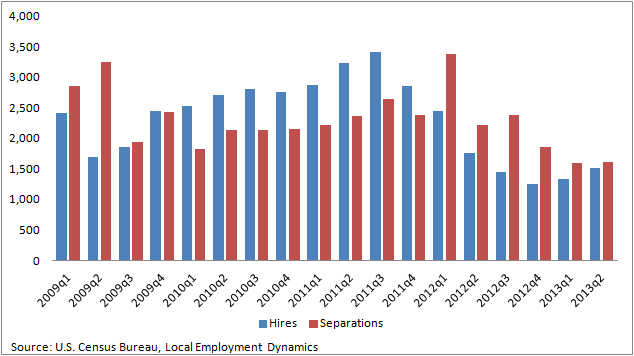 The nature of the industry isn’t just one of high turnover, but of miners transitioning from older, less productive mines to newer more profitable mines, even as they’re laid off in between.

That’s not to say that the coal industry isn’t facing some real problems. Separations have begun to outpace hires in recent quarters, and, as of the end of 2013-Q2, total coal mining employment was down 1,725 from 2009-Q1 (but still 2,629 jobs above its recent low in 2009-Q4). Competition from natural gas isn’t going away anytime soon, and while proposed EPA regulations aren’t the primary source of  West Virginia’s coal problems, they aren’t helping either. Plus, those more productive mines are more and more likely to be found outside of West Virginia. Of the top 10 coal producing states, southern West Virginia has the second lowest level of productivity. 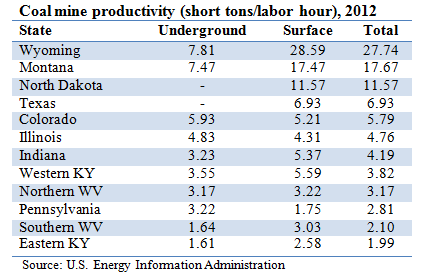 Nevertheless, its important to make a distinction between layoffs and actual employment loss in an industry, particularly one structured like coal.