Next week the Joint Select Committee on Tax Reform will meet again to continue the discussion on overhauling the state’s tax system. When they last met, the Committee sent strong signals that more business tax cuts would be the top priority, despite their recent failure to create jobs in West Virginia and the subsequent budget deficits that they created.

While West Virginia’s last stab at tax reform saw cuts to the Corporate Net Income Tax and the elimination of the Business Franchise Tax, one tax was left untouched – the business personal property tax.

The business personal property tax has long been decried as a job killer, of course without any evidence. Each tax reform proposal since Governor Underwood’s in 1999 (back in 1999 it wasn’t quite a job-killer yet, instead it was described as having a “very strong negative effect on business,”) have tried to eliminate it, but these past attempts have died, all failing to address the thorny issue of how to pay for it, although the recent Manufacturing Property Tax Adjustment Credit allows manufacturers to deduct their property taxes from their corporate income taxes. In 2014, property taxes on commercial and industrial personal property totaled $304.5 million, a sizable chunk of the state’s property tax base. 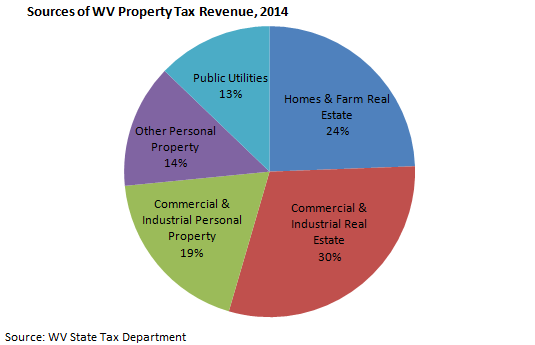 Flat-out eliminating 1/5th of our property tax base would be incredibly fiscally irresponsible, despite the rhetoric around it. But there is one way we can look at “reforming” this tax.

The big argument against the business personal property tax is that it is a job-killing tax that most other states don’t have, putting West Virginia at a disadvantage. While that argument doesn’t hold much weight, let’s entertain it for the purposes of this blog post. The funny thing about that argument is that it has almost nothing to do with the burden of the business personal property tax, just its existence. How so? West Virginia has one of the lowest property tax burdens in the country, almost no matter how you measure it.

Only in 1 of the above 8 different measures, the tax rate on an industrial facility in an urban area, does West Virginia’s property tax burden rank above the national average, and even then by only a few fractions of a percentage point.

So if West Virginia got rid of its business personal property tax and replaced it with a higher tax on business real estate, the state would be getting rid of a so -called “job-killer,” would look more like other states, and wouldn’t be increasing the overall property tax burden. Sounds like a good idea, right? Well here’s what it would look like.

Under West Virginia’s current tax structure, both businesses pay the same overall tax rate, with the commercial business paying $19,712 on $1.2 million of property, or 1.64%, and the industrial business paying $32,854 on $2 million of property, again 1.64%. Both real and personal property is taxed at the same rate for both business, and the amount of tax paid is directly related to the total value of the property.

So where as before, West Virginia had a broad property base, with low and equal rates, that resulted in tax burden directly proportional to a business’s property value, the state would instead have a narrower property tax base, with unequal rates, and a burden more influenced by what type of property a business owned, rather than its value.

What’s the point of this exercise? I don’t really expect the state to exempt business personal property and shift the tax burden onto business real property, but that’s kind of what the rhetoric around “tax reform” seems to imply. But does anyone really think that a hypothetical tax system with unequal rates and higher taxes on commercial businesses is really better for creating jobs and economic growth? However, it’s the unspoken assumption behind the campaign against the business personal property tax.

The fact is, those who don’t like the business personal property tax simply don’t like paying it. It has little to do with jobs or economic development, or else there would be some evidence of its negative impact after all these years. West Virginia has a property tax system characterized by its broad base, low rates, and equal treatment of all property. Those who advocate for eliminating the tax on business personal property are in effect calling for its base to be narrowed, its rates to be higher, and its treatment unequal, all so they can pay less while others pay more.