West Virginia’s free community college bill continues to move through the legislature. While the bill in its current form is fairly limited in who it applies to, it is worth revisiting the question of what it would take to provide free tuition to all of West Virginia’s in-state college students, and how that cost compares to proposed business tax cuts.

According to its fiscal note, West Virginia’s free community college bill (SB 284) would cost the state about $8 million, which is a minor cost compared to the $425 million per year in tax cuts the state has passed during its last tax reform, or the $140 million in tax cuts for manufacturing, coal, and natural gas that are proposed with SJR 9. But, as mentioned, SB 284 is limited to students enrolling in the state’s 2 year colleges.

While the state struggles to provide its teachers with a pay raise that can keep up with inflation, while also looking to allow logging in state parks as a source of revenue, it is unlikely the state could find the resources to expand its free college proposal. But state officials have claimed they do have a plan to pay for an ineffective $140 million tax giveaway to the manufacturing, coal and natural gas industries. So let’s compare the potential cost of providing free tuition to all in-state students to the cost of SJR 9’s proposed tax cuts.

The table below shows the estimated number of in-state undergraduate students at each of the state’s higher education bodies, based on the overall in-state share, as well as tuition and fees for one academic year for a full-time in-state student. 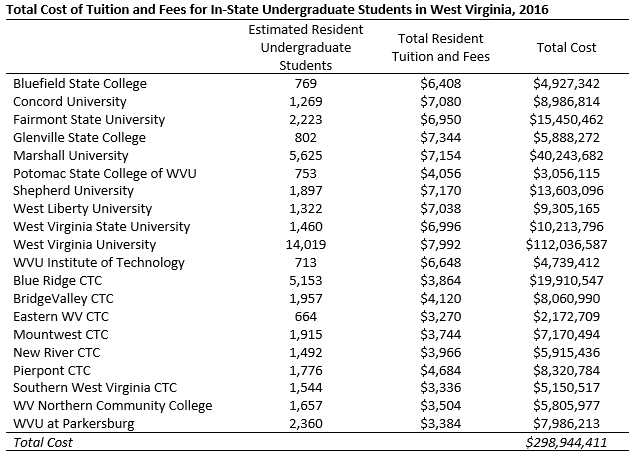 The cost could be further reduced by applying federal Pell Grants before waiving tuition and fees, using a “last dollar in” funding concept. According to the U.S. Department of Education, 8,285 student in West Virginia’s community and technical colleges and 20,572 students in the state’s public 4 year colleges received a total of $114.8 million in Pell Grants in 2016. Assuming the same split between in-state and out-of-state students as overall enrollment, in-state students in West Virginia’s public two and four year colleges receive $83.7 million in Pell Grants.

Applying both Pell Grants and the state’s PROMISE, WVGEG, and HEAPS programs drops the total cost of free tuition for all West Virginia students down to $123.3 million. That is $16.7 million less than the proposed business tax cuts in SJR 9, showing once again that expanding access to college isn’t a question of cost, but of priorities.

If West Virginia wants to improve its economy and solve its perennial challenges of low labor force participation, poverty, low wages, etc, it needs to take dramatic action to increase access to post‐secondary education and training. If West Virginia does not increase the levels of education in its workforce, the economy will continue to fall behind as investment occurs elsewhere. And while the case that what the state needs is more tax cuts is not supported by the evidence,  there is a large body of economic research that shows lagging educational attainment translates to lower wages and incomes for individuals and slower economic growth for regions.