Blog Posts > What Are the Healthiest Counties in West Virginia?
August 16, 2013

What Are the Healthiest Counties in West Virginia?

How Healthy is Your County? 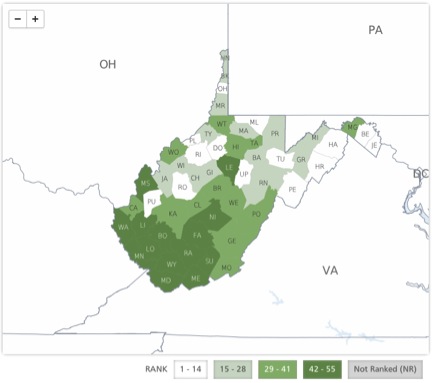 This week the WVCBP released an issue brief on the savings the state could expect if it were to allow public employees covered under PEIA to move their children to CHIP. Seven other states have made this switch, now allowed thanks to the Affordable Care Act. The Charleston Gazette covered the story on Thursday stating that Governor Tomblin is considering whether or not to take action on this policy change that would put more money into the hands of West Virginia’s low-income working families.

Tax cuts are continuing to hit home as the state prepares for a $300 million budget shortfall in Fiscal Year 2014. The WVCBP continues to ask not only if the tax cuts are worth it but if they are keeping their promises. Read more from Sean in this West Virginia Public News Service coverage.

In Case You Missed It

On Wednesday, the WVCBP released its report “West Virginia Should Extend CHIP Coverage to Public Employees.” Moving children from PEIA to CHIP, should Governor Tomblin decide to allow it, could save the state’s budget, and the budgets of many low-income working West Virginia families, tens of millions of dollars over the next decade.

Social Security just turned 78. Did you know that in 2011 this important program lifted 21 million people out of poverty? Read more from the Center on Budget and Policy Priorities. Interesting fact: almost half of the nation’s elderly would be poor if they did not have Social Security.