The West Virginia Higher Education Policy Commission has been developing a model of performance-based funding for West Virginias higher education institutions, as mandated by the legislature. While 37 states have adopted some form of performance-based funding models for higher education, they have not all been successful, and have led to some unintended consequences.

Most evaluations and research has found that performance based funding models have not been successful. Evaluations of Washington state, Tennessee, Indiana, and other similar studies have all found that performance-based funding models have not had their intended effect on retention rates, degree completions, or graduation rates.

Performance-based funding models in other states have raised concerns of weakening academic standards, including grade inflation, changing degree requirements, and moving students too quickly through foundational education. This was evident in Tennessee, which saw an increase in increase in short-term degree completions and a decrease in long-term degree completions, as institutions began to break degrees into smaller and shorter components that can be completed on their own, rather than one longer degree program.

With an emphasis on degree completion, another unintended consequence is increasing admissions requirements, including changing admissions standards, recruiting students most likely to complete a degree, and offering more merit-based financial aid. These changes can lead to fewer low-income and minority students. A study of Indiana’s funding model found that Indiana public universities enrolled fewer minority students after performance funding was implemented, compared to Indiana private colleges and public colleges in surrounding states, while another study found that Pell Grant revenue declined in schools after performance funding was implemented, suggesting that schools may be trying to meet benchmarks by restricting admissions.

While, West Virginia’s proposal calls for including additional weights for high-risk populations “such as including economically disadvantaged, non-traditional (adult) students, academically underprepared students, and racial and ethnic minorities,” it is unclear from the presentation if these examples all will be assigned additional weights and how they will be defined. In higher education low-income students and students of color are often concentrated at campuses with the least resources. These campuses would benefit from additional support to increase student success and outcomes, so it is important that additional weights for minority and low-income students are included made mandatory. Without additional weights to help, campuses could be incentivized to stop admitting students they believe are less likely to graduate or require additional resources to support.

West Virginia’s proposed model also includes criteria that rewards intermediate outcomes as well as longer term ones like degree completion. This too is an important aspect that will help avoid the shortfalls experienced by other states, and should be made a key part of the funding formula. But since 70 percent of the proposed formula is based on credit hours, it is important that care is taken not to disincetivize developmental education and remedial education courses.

West Virginia’s proposed funding model was based on the state funding available in FY 2018, which had been substantially reduced after many rounds of budget cuts in recent years. General Revenue appropriations for higher education in FY 2018 were $83 million below FY 2013 levels, an 18 percent decrease. The model will be asking West Virginia’s higher education institutions to increase student outcomes with fewer resources than what was available in the recent past. 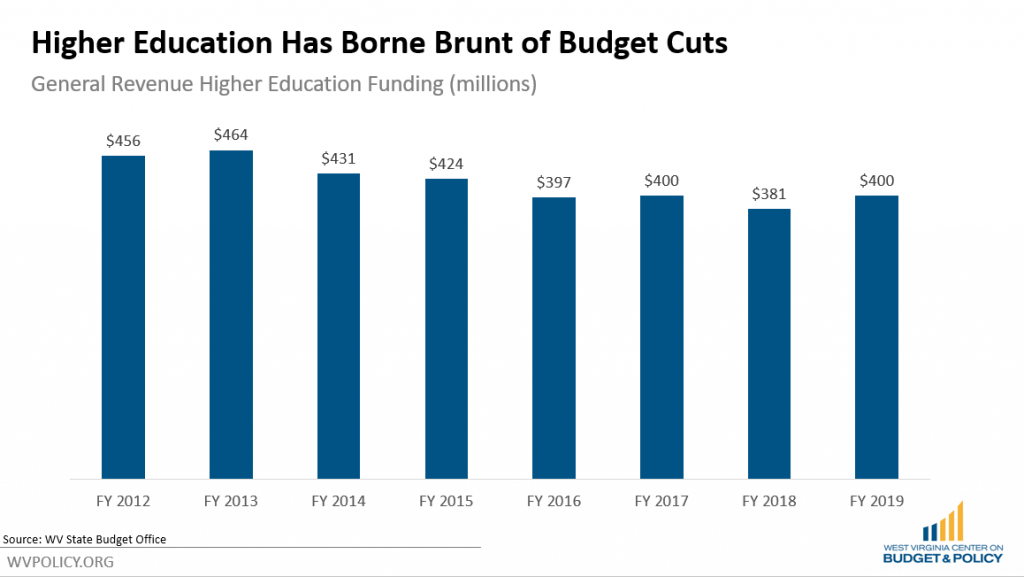 With these potential problems, it would be very beneficial undertake a comprehensive program evaluation of the state’s performance-based funding model after it has been implemented to identify any unintended consequences of the policy and make changes accordingly.