West Virginia’s Municipalities Have the Authority to Expand Worker Benefits

Everyone gets sick, but not everyone gets paid time off work to get better. Nearly half of West Virginia’s private sector workers, 46 percent, lacks paid sick leave, and people of color and low-income workers are the least likely to have access to this benefit. This means that those who have the most to lose by missing out on a day’s pay when they are sick are the least likely to have paid leave. Fortunately, West Virginia’s municipalities have the legal authority to pass ordinances to increase worker benefits and equity by extending paid sick leave to their residents. Paid sick leave is not only good for workers and their families, but also for businesses and local economies. 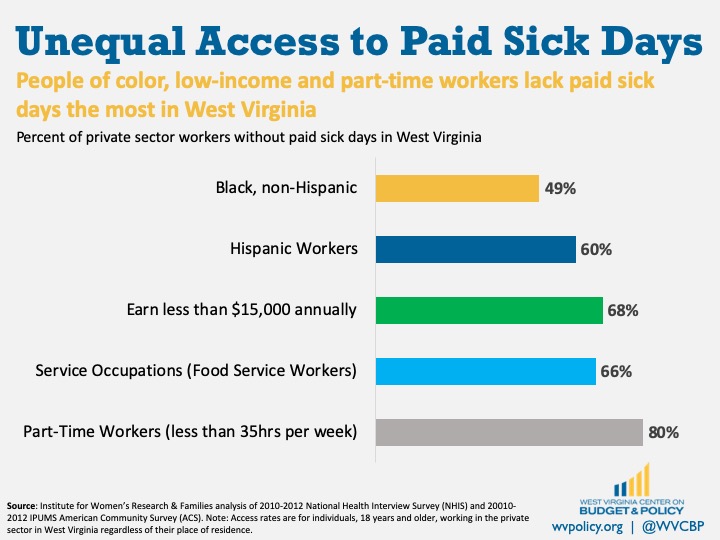 Paid sick leave lowers business costs and boosts revenue by increasing productivity and morale and reducing turnover. Working sick costs employers and our national economy $160 billion annually in lost productivity. Workers are 25 percent less likely to leave a job over a five-month period if they have access to paid sick leave and 28 percent less likely to be injured on the job. A survey of Connecticut businesses found that over three-quarters of surveyed employers supported the law a year and a half after its implementation. All together, over 33 million private sector workers are covered by paid sick days around the country.

Municipalities don’t have to wait around for the state or federal government. The West Virginia Constitution and state law grant municipalities plenary authority to enact legislation “[t]o protect and promote the public morals, safety, health, welfare, and good order.” A city’s municipal affairs include, among other things, “[t]he government, protection, order, conduct, safety, and health of persons of property [within the city],” “[t]he adoption and enforcement of local police, sanitary and other similar regulations,” and “the imposition and enforcement of penalties for the violation of any of the provisions of its charter or of any of its ordinances.”

West Virginia’s municipalities can and should consider joining the 42 (and growing) jurisdictions who have expanded worker benefits and improved public health by enacting paid sick leave ordinances.